Six Ages: Ride Like the Wind is a strategy storytelling game developed by A Sharp and published by Kitfox Games. It was released on the App Store in June 2019 and later ported to PC and Mac in October 2019. Ride Like the Wind is the first game in the Six Ages series, and A Sharp have announced that they want to create another five games. Two additional titles are currently in development: Lights Going Out and The World Reborn. Six Ages is a spiritual successor to King of Dragon Pass, which was originally released in 1999 and became a cult classic in later years.

Set in Glorantha, a universe created by Greg Stafford also known from games like HeroQuest and RuneQuest, the premise of Six Ages: Ride Like the Wind seems deceptively simple: manage your clan and your town. Unfortunately, when you start the game, you’ll quickly discover that the world is caught up in the middle of a war of the Gods, significantly complicating your task.

As chief of your clan, you’ll now not only have to manage your relationships with other clans, but please the right Gods in order to have enough food and shelter for your people. To do this well, you’ll have to familiarise yourself thoroughly with the Six Ages world and learn about your clan’s background, its ancestors, and its people, as you guide them through the decades. 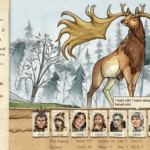 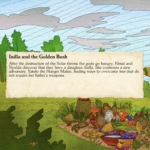 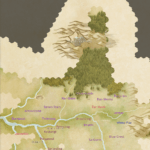 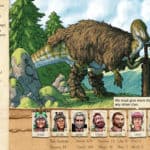 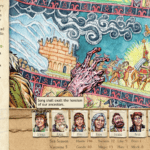 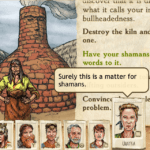 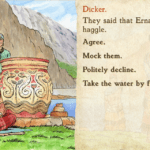 In terms of gameplay, Six Ages: Ride Like the Wind overlaps with its predecessor King of Dragon Pass in the sense that it is still a storytelling game at its core. The game’s interface feels like an enhanced visual novel peppered with beautiful images and references to mythology, and your clan’s story is propelled forward through the choices you make. While the game has plenty of resource management that you need to stay on top of, the focus of Six Ages is not so much on your resource stats than it is on your relationships with other characters, whether they’re a deity or another human.

Throughout a playthrough different characters will approach you with questions and dilemmas, and the game seems to encourage making decisions based on the specific enquiry in question rather than potential quantifiable bonuses resulting from your choice. Rather than focus on the bigger strategic picture like you might do in games like Civilization or Total War, Six Ages pushes players to think more on a human level, taking factors like cultural clan habits, their lore, and specific character quirks into account.

Because of this dynamic, no choice comes without consequences: if you please one God with a sacrifice, for example, you might displease two others, and the same goes for other clans and your own followers. You do have several randomly generated advisors available to counsel you, but they all come with their own skills, perks, and opinions. This often creates situations where the solutions presented by your advisors range from clever, to sensible, to downright weird, and eventually you’ll still have to make the call on which solution is the best one for you. Once you choose a solution proposed by an advisor, they will execute your decisions for you and report back.

To me, this was one of the things I enjoyed most about Six Ages: unlike other resource management games where there is a clear delineation between good, bad, and evil actions, the decisions your make in Six Ages are complex and layered, and you never know which one is right. Ultimately, there’s only one relevant consideration in the game: how will this choice benefit my clan?

“…Six Ages: Ride Like the Wind brings an enormous amount of complexity to the table, both in its story and its strategy gameplay mechanics.”

While its interface might look old-fashioned or too simple for some, Six Ages: Ride Like the Wind brings an enormous amount of complexity to the table, both in its story and its strategy gameplay mechanics. Mixing RPG, story and strategy elements is never an easy task for game developers, but Six Ages: Ride Like the Wind brings them together in a beautiful and unconventional way, with choices and plot twists that are sure to keep you on your toes.

With a refreshing combination of story, mythology, and strategy, Six Ages: Ride Like the Wind is more than a worthy successor to King of Dragon Pass; the game will have something in store for newbies and King of Dragon Pass veterans alike.