Trine 4: The Nightmare Prince Review – Anything but a nightmare

A long ten years ago (yes, 2009 was ten years ago) the first Trine game was released and immediately praised for its gorgeous world design and fresh gameplay mechanics. Only for developer Frozenbyte say, “oh, you saw us making an amazing puzzle game? Wanna see us do it again?” before releasing Trine 2 in 2011.

The sequel only improved upon everything the first game brought to the table, improved graphics and art direction, along with more in depth puzzle solving. The third game, however, was widely considered a misstep, moving from 2.5D to 3D and losing more than a little of the original game’s charm with it. Trine fans will be happy to hear that Trine 4: The Nightmare Prince, returns to the formula that worked so well in the past. It’s a fresh take on the familiar gameplay with modern graphics and new gameplay mechanics to boot

This newest installment follows the three heroes Zoya, Potius and Amadeus on a quest to bring a young misguided wizard Celius back to the astral academy. Unsurprisingly, this isn’t going to be as easy as it sounds. Celius (the titular Nightmare Prince from the title) has the power to bring his and others’ nightmares to life, and he isn’t in as much control of this power as one would like.

So the main meat of the story ends up being the heroes following Celius and resolving problems caused by the nightmares left in his wake. Their journey takes them through endlessly gorgeous and vibrant locations that constantly had me stopping to take a screenshot. It isn’t a masterpiece by any means, but for a game that is about solving puzzles first and foremost, it’s more than serviceable. Plus, hey, its meant to be a representation of a fairy-tale, and those are always going to be simplistic in nature.

The gameplay, as always, is where Trine 4 really shines. All movements are punchy, slamming into a crystal wall and shattering it with Pontius’ shield feels great and even better is the quick ‘thwip’ you hear (and feel through vibration) every time Zoya hooks onto a grapple point and swings across a gap. The puzzles are great too, they prove to be consistently entertaining and fun. Overall though, the puzzles aren’t the most challenging. I didn’t really start having any difficulty until the Dream Castle where there were puzzles involving light shafts and portals to tackle. The sort of stuff that really warrants some out-of-the-box thinking. 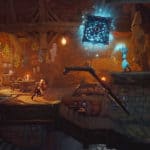 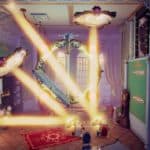 “Being a physics based puzzle game, there is always opportunity for my favorite kind of puzzle solving. The wrong kind.”

Otherwise, it’s mostly just a ‘find the quickest way across the gap’ fare. There’s nothing inherently wrong with that sort of thing, especially when the number of abilities you can use are constantly growing. Being a physics based puzzle game, there is always opportunity for my favorite kind of puzzle solving. The wrong kind. The kind where you spend so long stuck on a stupid idea that definitely wasn’t the one the developers planned for you, and you slam your head against a wall until you force the game to do your dark bidding. What do you mean i could have just used Pontius’ shield to redirect the water? I spent 20 minutes furiously arranging boxes until the water miraculously got to where i needed it to, and it was thrilling.

With so many different moving parts, Trine has always done an amazing job shoving the players into a room and saying, “here’s some boxes, a rope and a shield. Have at it, kids”. There’s something endlessly satisfying about knowing you solved the puzzle, especially if you know you solved it wrong.

One big disappointment was that Pontius and Amadeus’ charge abilities ruin some of the puzzles a bit. There are sections where the game clearly wants you to make a rope bridge to tightrope across, but you can literally just ~fwoosh~ across to the other side. While making a bridge isnt super difficult most of the time, it’s a hell of a lot more satisfying than just magicking yourself across the gap.

An interesting thing to note is that puzzles in co-op and single player are vastly different. One puzzle you complete with friends will have important parts missing when you play on your own. The answer will usually be the same but there will be one less pressure plate to push or one less light shaft to re-direct. This is a neat touch, and it’s a nicer alternative than having the puzzles be the same between gameplay modes. That would mean them being either too easy for the multiplayer crowd or too hard for the single player.

It’s a tidy compromise that comes with only one downside; you will be required to go back to the main menu and reload your stage in single or multiplayer depending. This is so the game is able to load the alternate version of the stage, to prevent single players from being stuck on a level that is only possible with multiple players. 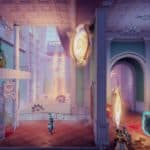 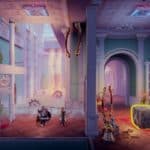 The game also has two modes, unlimited and classic. Unlimited means that more than one player can play the same character at once, whereas classic means one character each, and restricts the maximum player count from four to three. I played Trine 4 in unlimited mode, which is definitely great if you want some wacky hijinks to ensue. Two or more players flinging boxes around at each other or constantly ground slamming so fast that it makes the whole screen shake, its wild and incredibly fun. Though i’m sure folks who want to take the game more seriously will have fun with the classic mode as well, just keep in mind that once you start a game in one mode, you can’t change it and will need to start a new game to play in the other.

Unfortunately, one part of the game that still feels stale after all these years is the combat. It feels disconnected and like an unneeded interruption to the great puzzles, as enemies come in predetermined waves and are usually dealt with very quickly. It would have made sense for the battles to be designed like a micro puzzle on their own, instead of a hack and slash that comes down to switching to Ponteus and mashing attack. It’s also strange that the fights only ever take place in weird Smash Bros Battlefield-esque stages. They never feel like part of the world, always disconnected in their own little platformed area that just disappears when all the enemies are defeated. This is the only part of the game that really disappointed me.

When it comes to the best way to play Trine 4 on Switch. I would 100% recommend playing the game docked, as you may have seen from some of my screenshots throughout this review, the game’s quality drops incredibly when played in handheld mode. What’s also interesting is that the game doesn’t have single joycon support because it always requires players to use both the D-Pad and the trigger buttons. A little disappointing for a multiplayer game on Switch, but it does make sense given how many actions a single player needs to be able to perform at once. You’ll need a second set of joycons or a pro controller for this one.

Overall though, the game is a magical experience. The atmosphere and background design are to die for and the way the characters banter back and forth really make the adventure all the more charming. The puzzles aren’t the hardest you can find, but they are consistently enjoyable with a few head-scratchers here and there.

If you’re looking for a new puzzle game to give a crack, i would highly recommend Trine 4: The Nightmare Prince. And hey, if you want to play the first three as well, an ultimate pack is going to be released later this year that comes with the original games along with Trine 4. Give it a go, I’m sure you’ll have a blast!

Bree somehow managed to weasel her way into a game design degree, is perpetually writing, and hasn't stopped playing Skyrim since it first came out.