There’s a rule of thumb that suggests that popular culture exists in 30 year cycles. Now that 80s kids are all grown up and making our TV, films and video games, nostalgia for the 1980s is clearly in right now. If it isn’t clear in the title, Black Future ’88 is a love letter to 1980s neon, Cold War paranoia and retro technology, wrapped up in a modern rogue-like platformer package. Even if you’re not a former 80s kid, however, SUPERSCARYSNAKES’ newest title is a pretty satisfying experience, at least in short bursts.

In Black Future ’88, nuclear Armageddon occurred in the summer of 1988, bringing society as we know it to an end. You play as one of 5 diverse survivors trying to ascend a tower and stop Duncan, the tower’s owner and the one who dropped the bombs in the first place. Along the way, you will take on the tower’s wardens who will try and stop you. It’s not so much a plot as a vague set-up, but it sets the stage well enough for the gameplay. While I might have liked more insight into who Duncan and the protagonists are and what they are trying to accomplish, this isn’t really a game much concerned with telling a deep narrative.

Gameplay feels like a cross between a conventional 2D platformer and a bullet-hell shooter. Bullets fly slowly across the screen and appear everywhere. Fortunately, you can dash through bullets if you time it right, deflect them with a melee weapon, or just jump around them. While it often felt chaotic, the game’s UI made it easy to tell where the enemies were and who was shooting at me when the retro-inspired 16-bit characters began to blend in with the background. 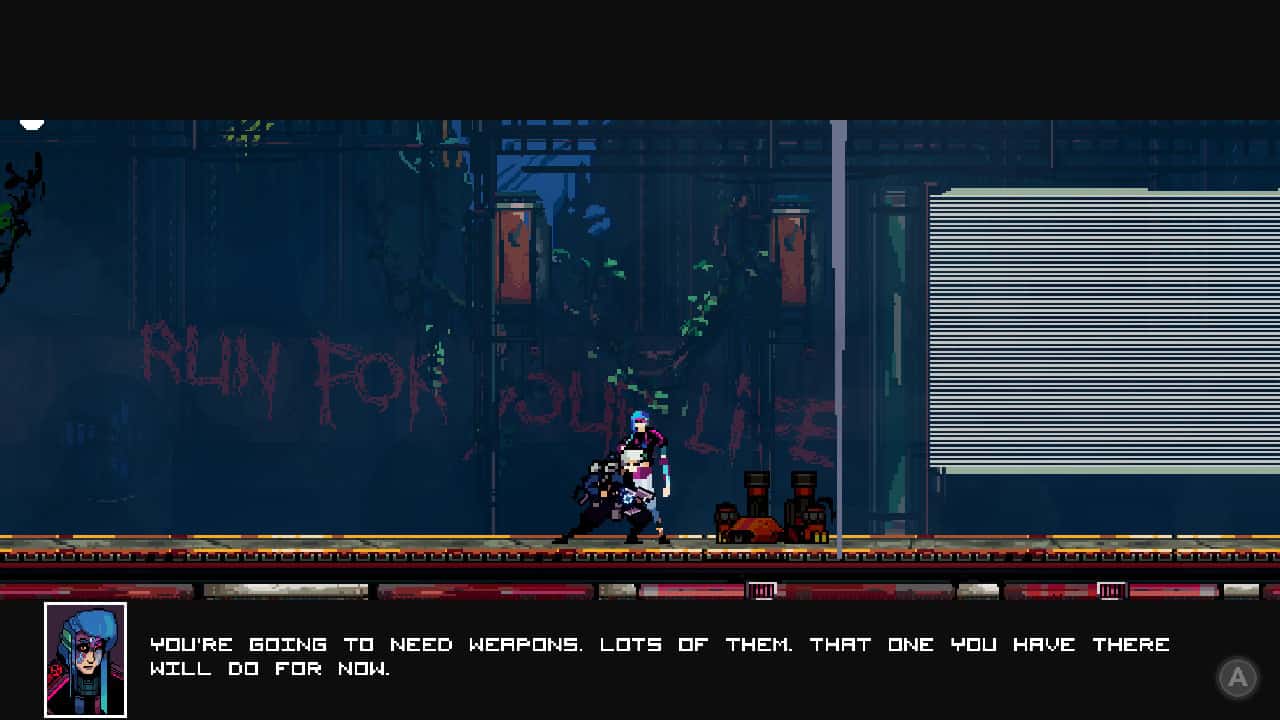 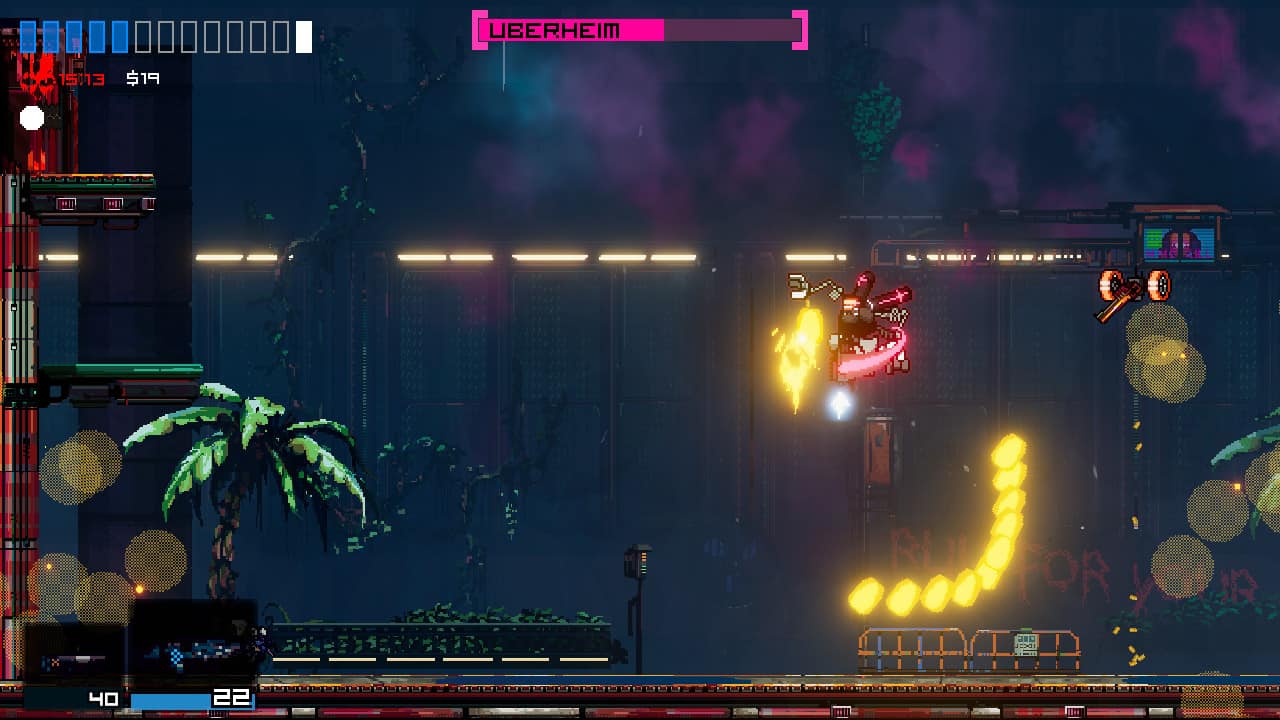 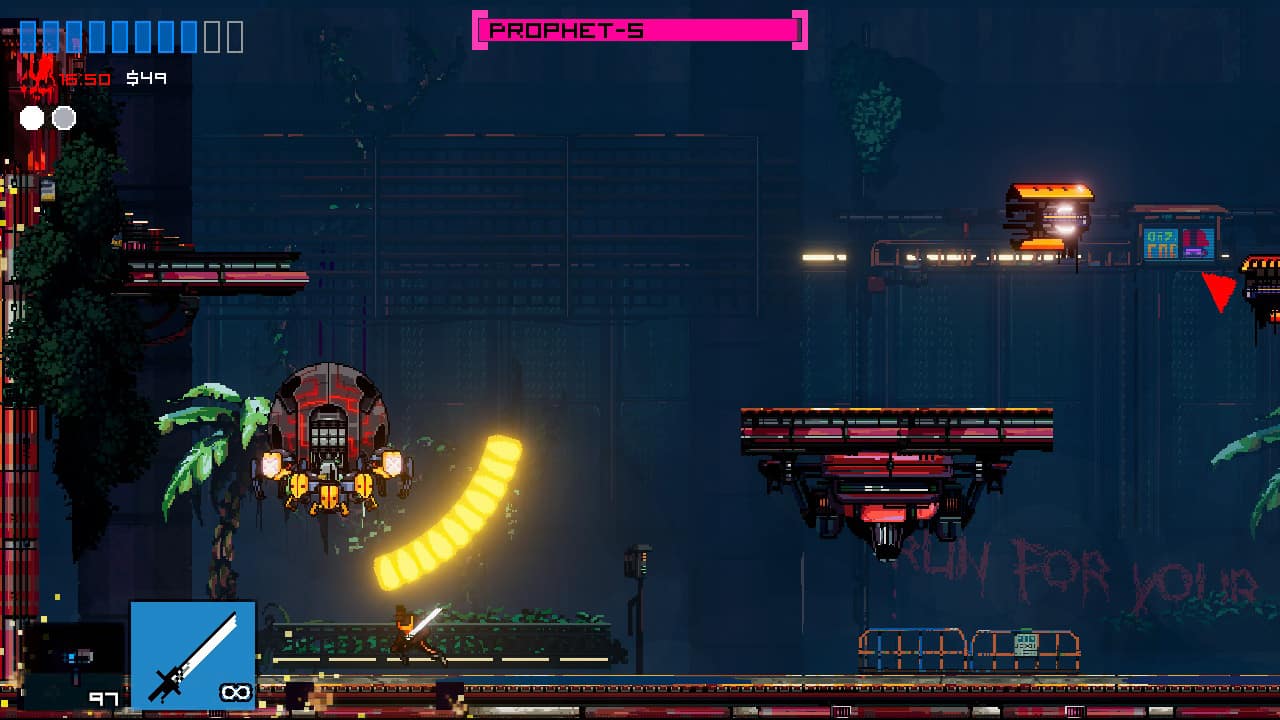 One of Black Future ’88’s main sources of tension is the ticking clock. Every run is time limited, ticking down to when your player character’s heart stops. You can purchase stims in-game which boost your abilities at the cost of the timer. However, other upgrades you unlock allow you to get time back in certain ways. It made choices of how to proceed difficult; the critical path to the next boss is always clear, so going on a detour for more money or weapons is always a conscious choice of sacrificing time.

As for the unlocks themselves, I found the game’s approach to loot about the right balance. As with most rogue-likes, the difficulty can often waver depending on whether you find a totally unbalanced combination of unlocks early in a run. There are 50 different ranged and melee weapons available, with different effects. However, it was rare that I got to the first boss without some new ability or weapon in hand. Furthermore, you are constantly unlocking new items to find in the tower when you level up. Even unsuccessful runs grant experience. Even when I when I had several bad runs in a row, I still felt like I was progressing. 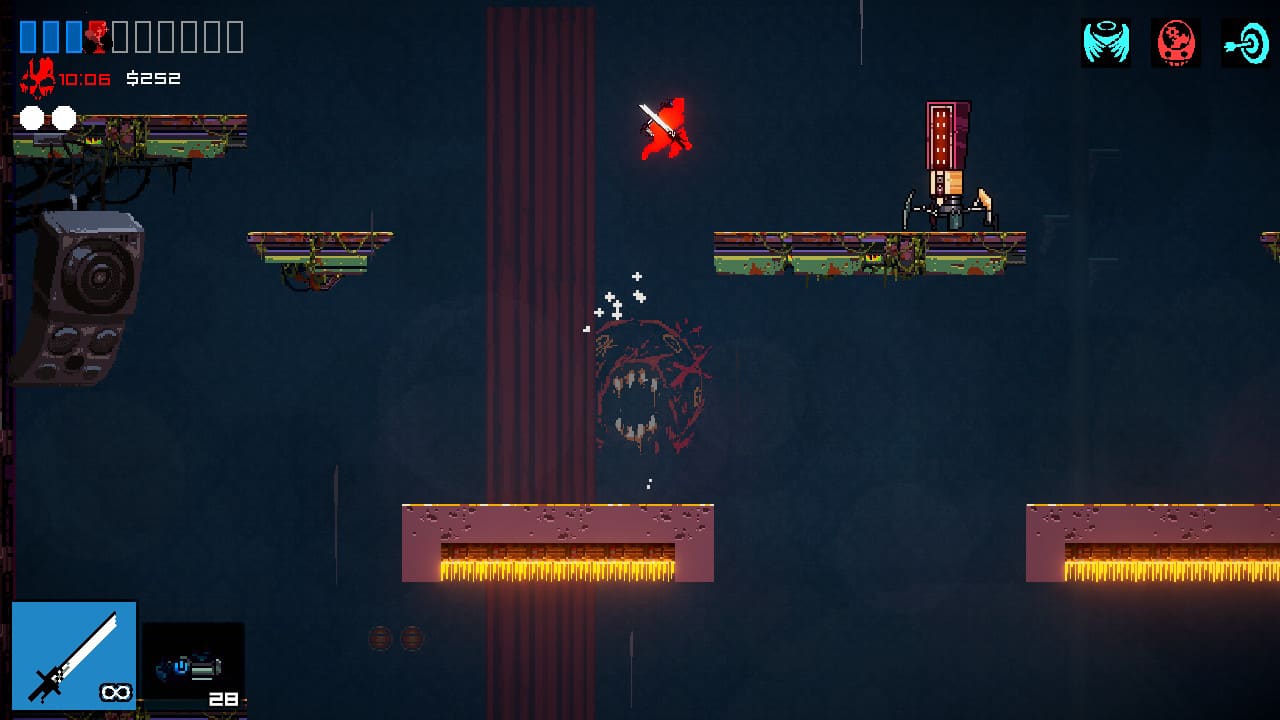 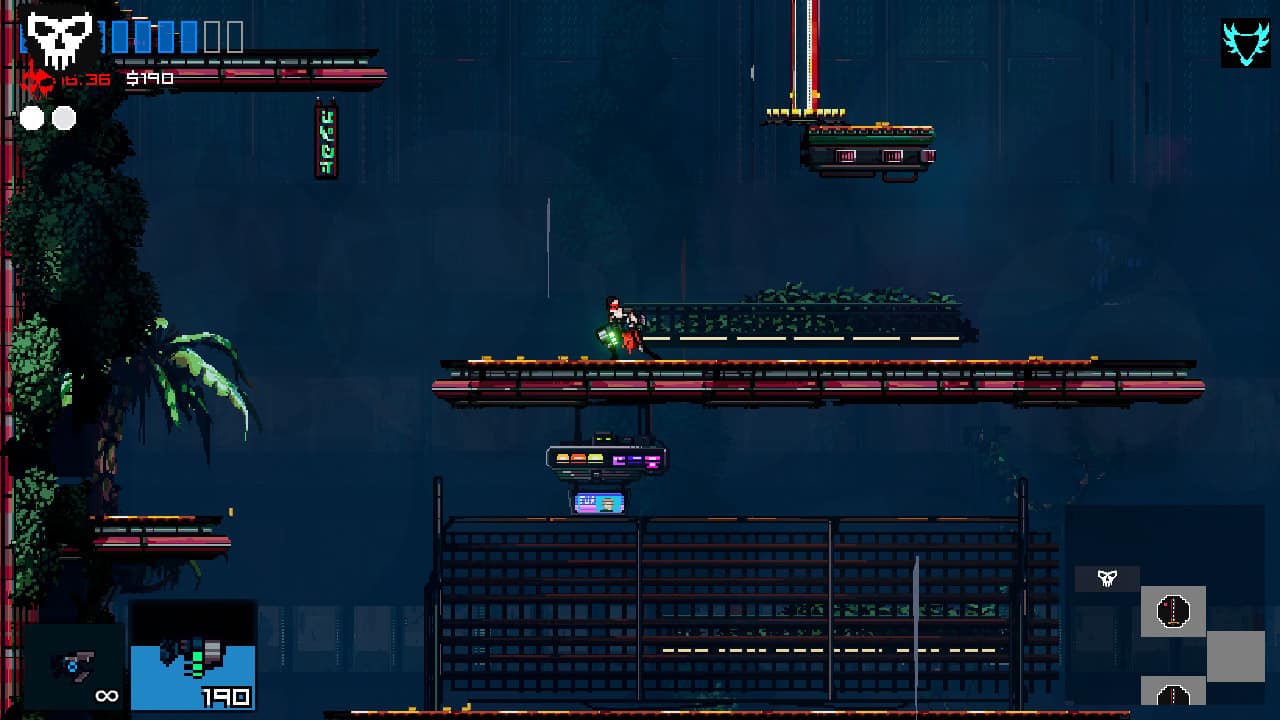 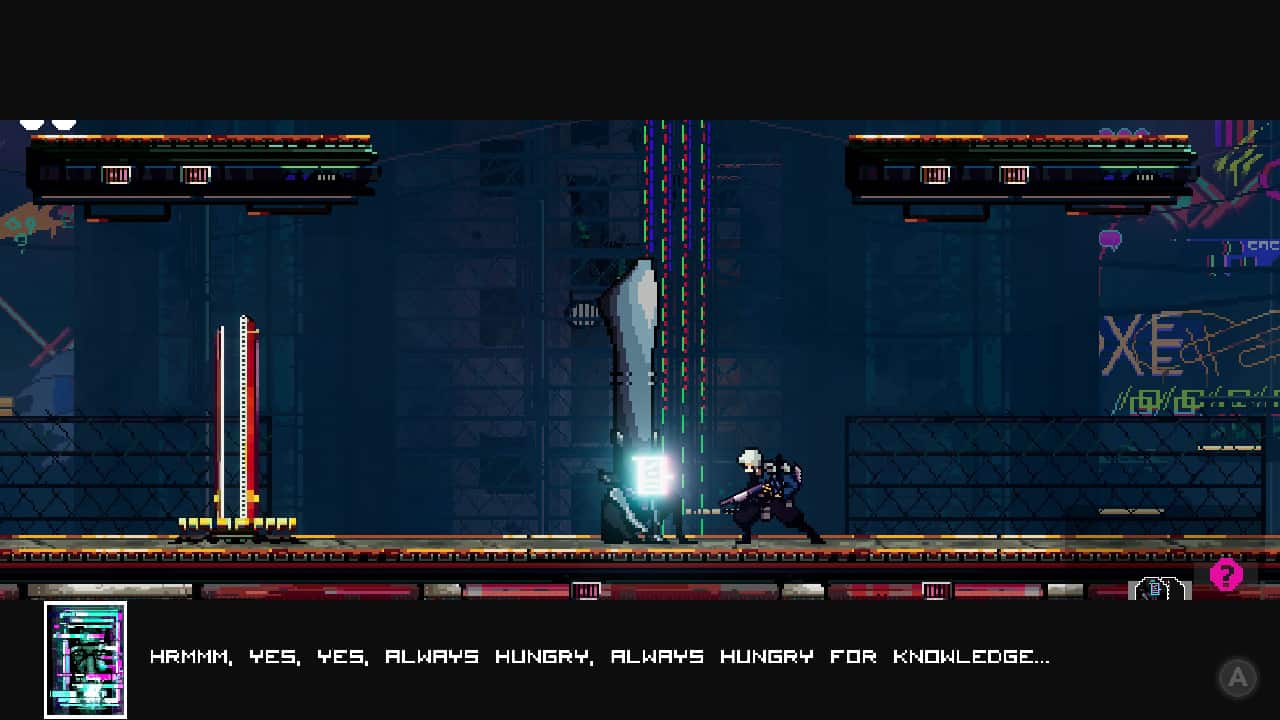 Black Future ’88 also comes with a co-op mode which can be played locally. It makes Black Future ’88’s chaotic gameplay even harder to follow with twice the projectiles flying about. If the game’s five protagonists looked more distinct, or it was easier to tell which player was which, it may have made it easier to follow. While the co-op mode was certainly fun to play around with, it didn’t feel like the recommended way to play the game.

This review won’t be complete without noting the great soundtrack. Black Future ’88’s synth-heavy soundtrack sells the fast-paced, oppressive tone of each run. Furthermore, you can scroll through the whole soundtrack in the options menu and pick the background music.

In the end, however, all rogue-like games sort of end the moment the player begins to notice the repetition. While Black Future ’88 boasts a substantial number of weapons and abilities, there isn’t much variety in the bosses and enemies. While it was engaging unlocking new guns, swords and stims, it doesn’t take long to memorise the attack patterns of the small number of wardens who populate the tower. If played in short bursts, Black Future ’88 probably holds more longevity.

Black Future ’88 is a pretty easy recommend for anyone looking for a new rogue-like platformer to play. So long as you’re only looking for a fun gameplay experience and not any kind of engaging narrative or world-building, you should be well served. With a rewarding progression structure, challenging gameplay and great soundtrack, it’s easy to have a good time with Black Future ’88.