Zombie Army 4: Dead War is a mashing together of two very different properties. On one hand, it’s a spin-off of the Sniper Elite series, sharing the same gameplay, including the satisfying X-ray kill-cams. On the other hand, there’s zombies all over the shop. The game is soaking in schlocky B movie aesthetic, and cares more about the player having fun than anything else. And you can have a lot of fun with Zombie Army 4. Just as long as you play by its rules.

Like the Sniper Elite games, Zombie Army 4 is set during World War II. Before you think the war is treated with any kind of respect, the game begins with Adolf Hitler using magic to summon an army of the undead to take over Italy. It’s a flimsy, nonsensical premise to base a story around. However, it’s a wonderful (flimsy, nonsensical) excuse to throw unique, varied enemy types at the player. Alongside the run-of-the-mill shambling undead, you’ll soon encounter sniper zombies, who have an uncanny aim and can jump across rooftops. There’s grenadiers, who hide behind a giant shield. There’s Commanders, who stand back and magically buff the zombies around them. Zombie wizards, y’all.

This being a co-op game means this is somewhat a co-op review. Fellow Checkpointer Charlie Kelly and I played through the first three (of nine) levels together, before going our separate ways. It’s interesting to note that Charlie and I had two very different experiences with co-op. Here’s what she had to say.

Charlie: Zombie Army 4 isn’t a deep game, clearly. It never really was trying to be, though. This is from the people who brought us games like Strange Brigade and the Sniper Elite series. With that info I knew I was in for a fun, chaotic ride and it definitely achieved that. Being smart about how you tackle hordes of zombies is my favourite part of this game. I could do the simple, obvious task of maybe taking a few out in my immediate vicinity with a shotgun, but where’s the fun in that? Instead, I often used the surroundings I was offered, shooting down a scaffolding which in turn ignites and sets off some barrels, resulting in a chain reaction of bloody goo where my foes once stood.

And while Charlie was off cleverly using the environment to her advantage, I made the mistake of trying to shoot zombies with a sniper rifle, because I thought this was a sniper game. You can switch between three guns in-game: a sniper rifle, a pistol, and a third slot for either an assault rifle or shotgun.

Sniping only works up to a certain point. Landing head-shots is satisfying, but tough, both because the zombies move erratically, and because on Medium and higher difficulties, the game takes wind and gravity into account. The Empty Lung ability lets you aim more accurately at the cost of some stamina, but that wasn’t helpful when I had dozen zoms just five feet away from me.

Charlie: What I will say is that the game needs a clearer definition of classes and the way people play. You’d think a game that stemmed from the Sniper Elite series would reward people that prefer this as their playstyle, but it doesn’t much. Sure, there’s a spot or two in some levels where you can snipe at long range and pull off some satisfying brain poppings and kill-cams but more often than not combat is a lot more in your face. It’s a shame too, because the lung shots, often resulting in critical hits, are utterly joyous. In this regard, I was rewarded more for my playstyle of frantic close counters than Pedro was for his patient gunplay. It made me empathise with him each time I saw my kill count significantly and unfairly higher due to this lack of balance.

I mean, let it be known, Charlie is better at most shooters than I am. But dang, out of the two of us, Zombie Army 4 clearly had a favourite. Charlie was able to rack up high kill combos, which replenished her ammo and health-restoring Takedown ability. My meticulous head-shots weren’t nearly as advantageous. At the end of each checkpoint, you are given a score based on your performance. Charlie’s final score was consistently more than double mine, which meant she levelled up faster than I did. Levels only give you new abilities and cosmetic items to equip onto your loadout, but at the rate I was gaining mine, I felt like I was playing the game wrong.

Ammo is scarce, especially in the absence of an ammo crate or a Takedown. In these moments, regaining any involves running up to zombies and stomping on corpses enough times that they explode into bullets and med-kits. Stomping is an awkward mechanic at the best of times, and takes you out from the safety of higher ground. Which makes perfect sense for a zombie game, but not so much for a sniper game. 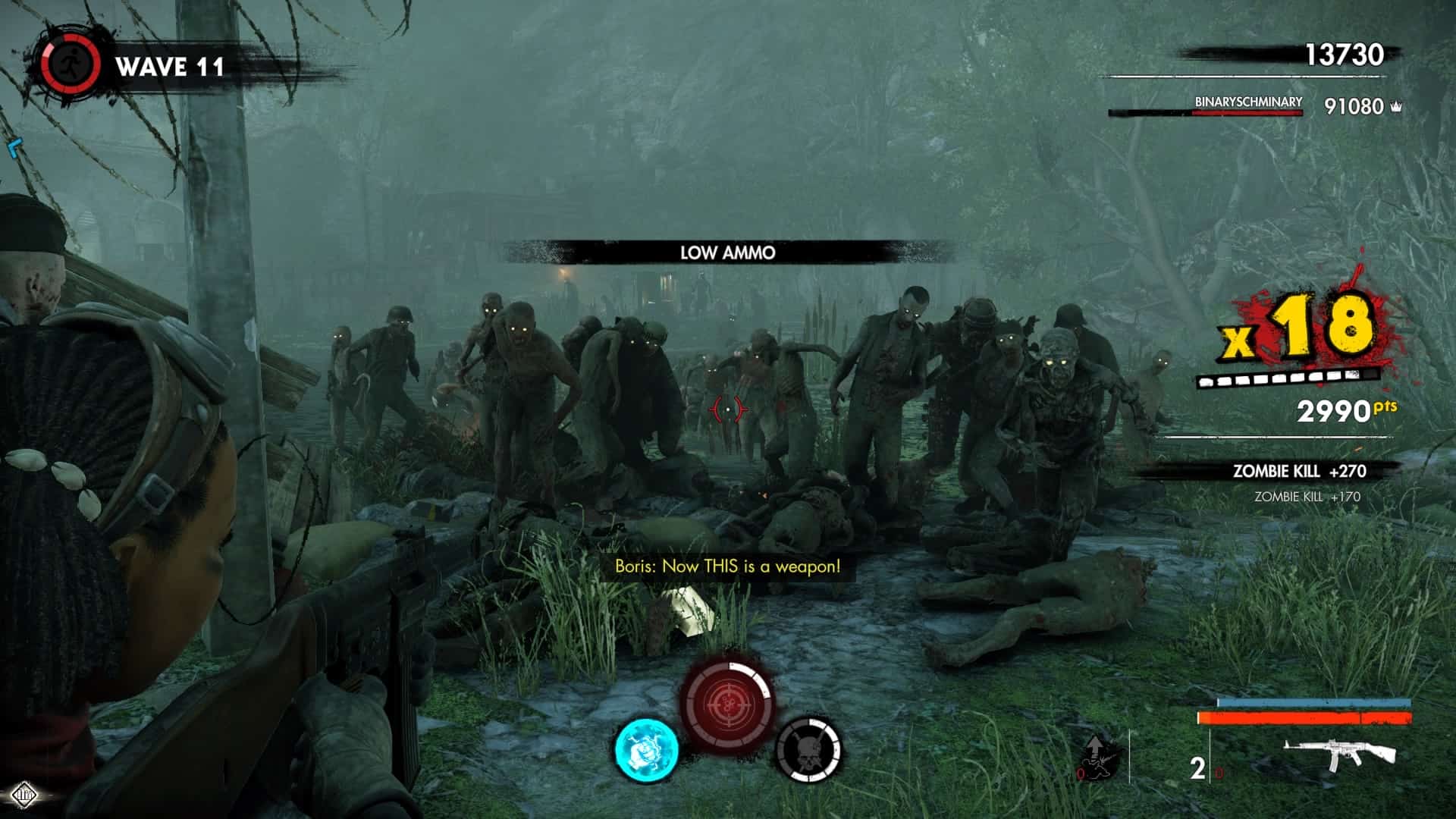 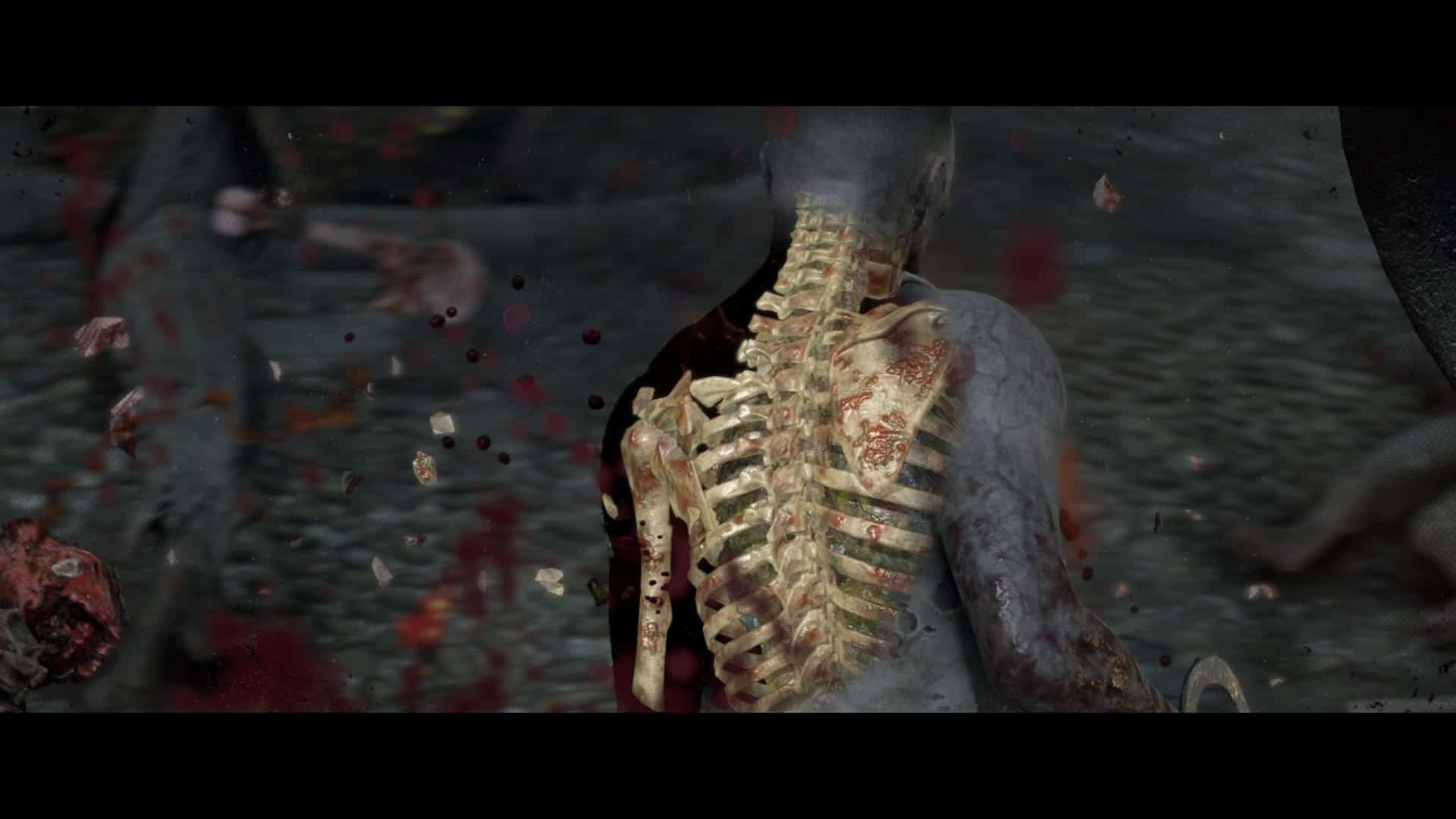 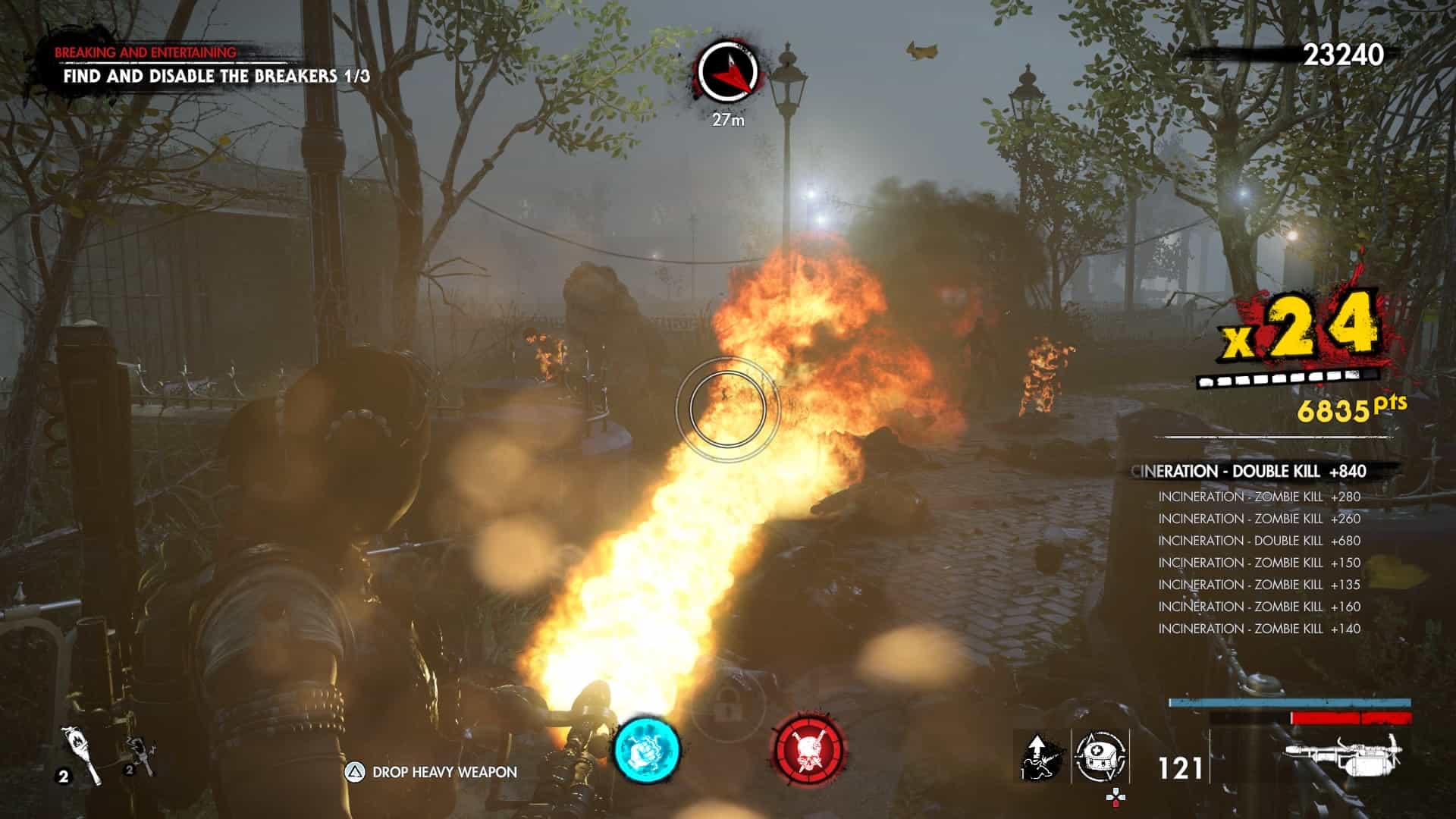 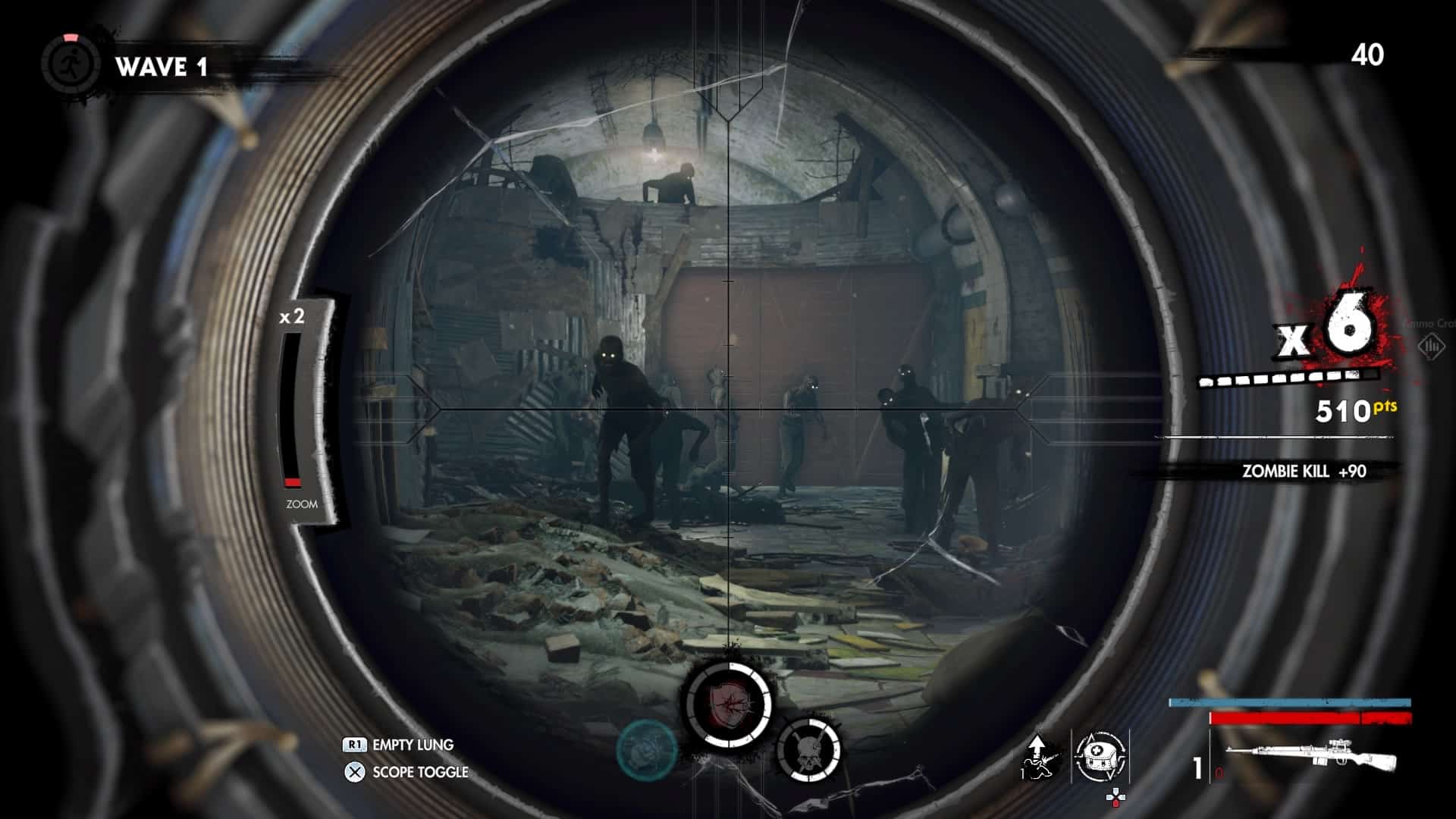 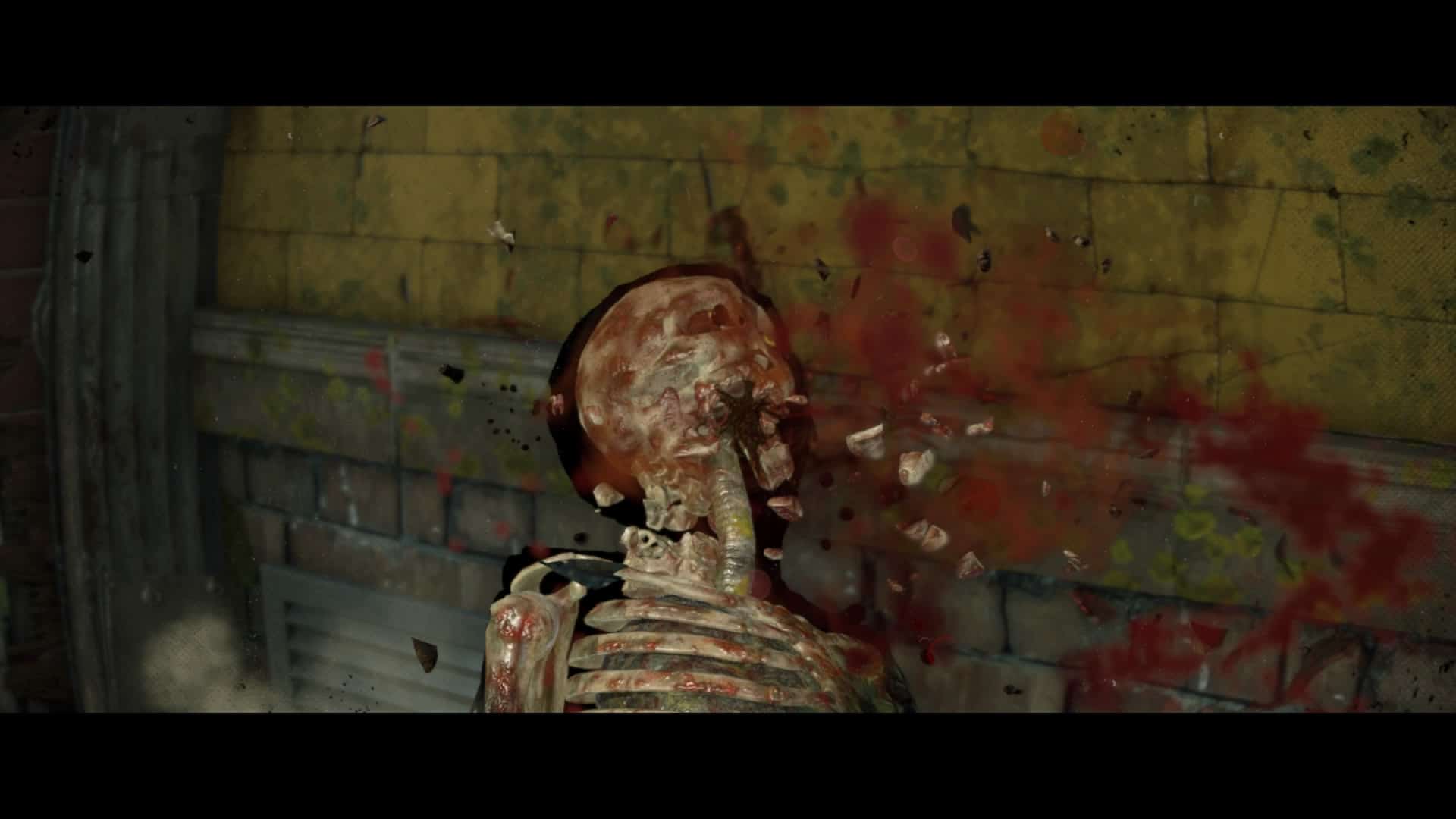 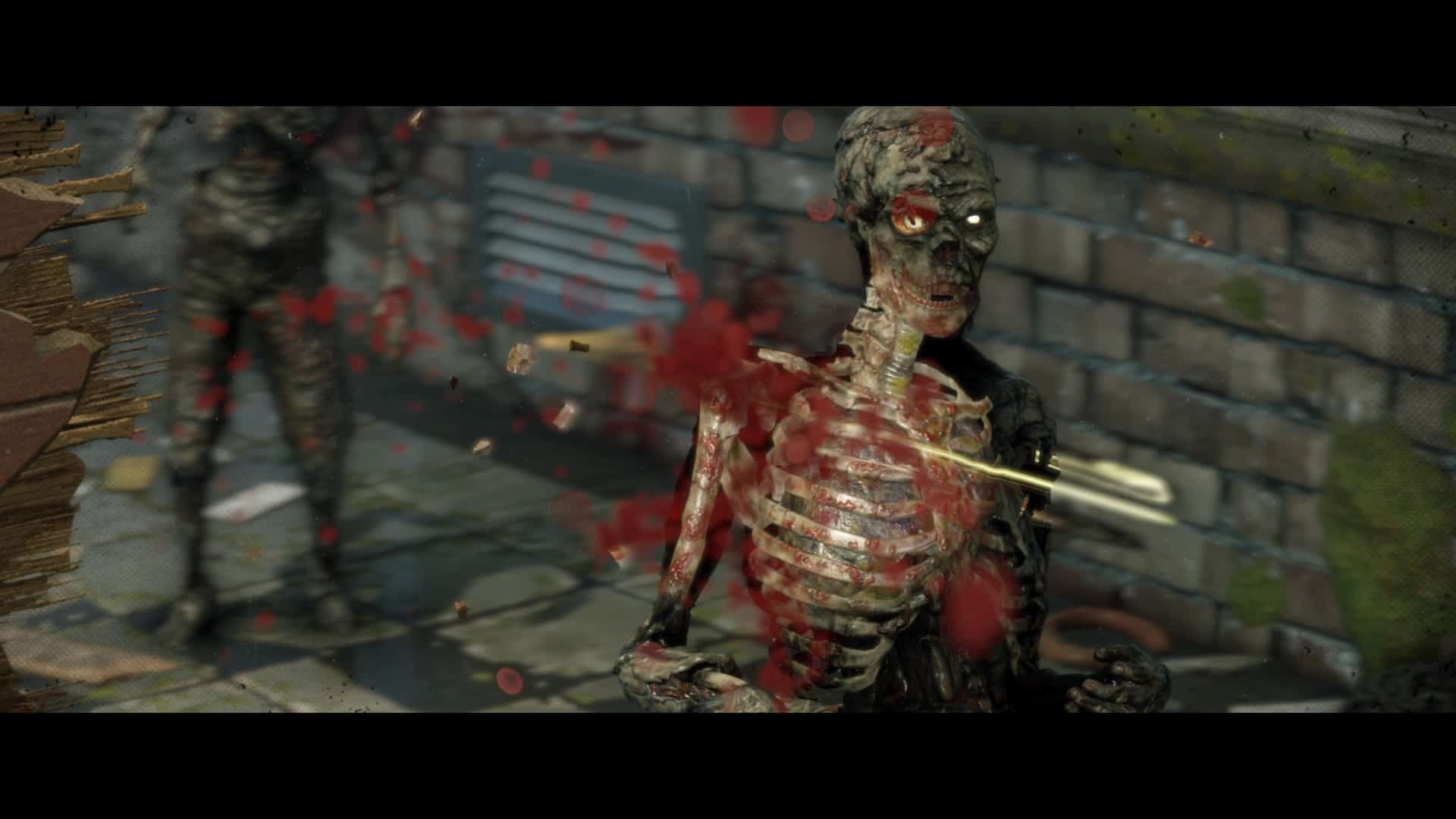 When I was swarmed, I was forced to switch to my other guns, quickly run out of ammo, then wait for Charlie to rescue me. But once I started playing the game on my own (both through the Campaign and the exhilarating Horde mode), I finally started enjoying shooting with a rifle. This is due to one major difference: when in single-player, Empty Lung slows down time. This one simple (and understandable) change makes sniping feel much, much fairer. Sure, I still had to switch to other guns or piff a grenade out when the going got tough, but it gave me that extra leg to stand on that co-op wouldn’t allow me.

“I felt like I was playing the game wrong.”

Charlie: Traversal isn’t perfect and I really could’ve done with a mapped dodge button to dodge the meatier and tougher enemies, rather than the awkward and ineffective slide mechanic.

Even while sprinting, jumping over obstacles takes a very slow animation. Climbing involves pressing one button to grab a ledge, then another to climb up or down. Moments like these remind you that these controls were originally designed for Sniper Elite 4, and don’t totally mesh with the world of Zombie Army 4.

One final fun thing that does totally mesh with the world of Zombie Army 4: every time you die in co-op (which for me was a fair amount), your character turns into a zombie. It was fun spectating Charlie as she shot my own character with electrically charged bullets. Ah, World War II.

This co-op sniper game has a big conundrum at the center of it. Co-op is fun, but not for sniping. Sniping is fun, but not in co-op. If you’re a Sniper Elite fan who wants to continue that series’ playstyle in a zombie shooter, there are some caveats to deal with. Fortunately, there are many different ways to play Zombie Army 4: Dead War, so it’s quite easy to avoid this conundrum altogether. I’m definitely going to dip back into the game from time to time, because making Nazi skulls explode is quite therapeutic. Also, because I’m going to beat Charlie’s score one day. One day.