Serious Sam as a franchise is something that never really crossed my radar. I may have seen its name every so often during a Steam sale or referenced in conversation when talking about how most FPS games do not let players run wild enough, although for the most part Serious Sam was an anomaly to me. That all changed however as soon as I first loaded up the newest game. How had I never played this franchise before? It looks like if someone made a game in Garry’s Mod about character named Sam who was just different enough from Duke Nukem so as to avoid any potential copyright infringement.

Serious Sam 4 has been through an excruciatingly long development cycle, with the game originally being announced in 2013 after having already started development back in 2012. 8 years later, the game is finally here and looks to be worth the wait! Currently the game is only available on PC, with both console versions sadly delayed to 2021. However a quick look at the graphics options for Serious Sam, and it becomes evidently clear that this game was made to play on PC with the highest of frame-rates.

Sam is currently with AAA (Alien Artifact Acquisition), who are members of the Earth Defense Force. Their mission is to locate a priest, who knows the location of the Arc of the Covenant, which contains the Holy Grail, which is in fact an alien artifact. It doesn’t make sense, and it doesn’t matter. There are aliens to kill!

While some games delve deep into their lore for players who wish to dive head first into their narratives, Serious Sam wants you to dive head first into a horde of running aliens with bombs strapped to their hands. Oh did I mention they’re constantly screaming as they draw ever closer? The game’s narrative only exists to provide adequate context, so that the player won’t be confused when they find themselves shooting aliens in Italy during Pompeii’s second volcanic eruption.

The paper thin plot however isn’t entirely wasted. In fact it lends to the game’s charm of being incredibly self-aware, almost wearing that self-awareness as a crutch for the few shortcomings this game possesses. It’s dumb, but it’s also fun. And Serious Sam is far more concerned with you having a blast while blasting waves and waves of aliens. The opening level alone is purposefully made to showcase just how insane this game can scale in terms of enemy variety and quantity. My PC could barely cope, but it made for the ultimate power fantasy of killing aliens who’ve declared war on Earth.

It wouldn’t be much of a power fantasy if there wasn’t also dozens of weapons to choose from. Weapons that somehow all fit comfortably inside your jean’s front pocket. Dual-wielding pistols, shotguns, more shotguns, rocket launchers, sniper rifles, the list goes on. You’ll be burning through so much ammunition that you’ll eventually be making use of your entire arsenal, forcing you to experiment with different weapons and not just rely on your favourite. My favourite being the double-barreled shotgun, for obvious reasons that require no explanation. 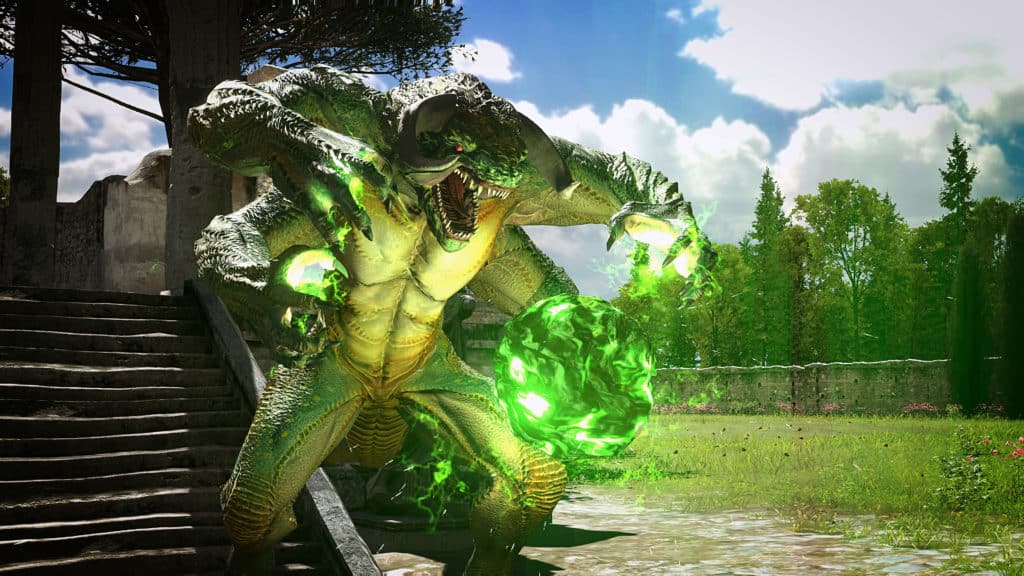 Enemy variety is both absurd and genius at the same time. There is a wide selection of enemy types that range from your low level mobs to gigantic beasts that will force you to keep moving, struggling to figure out how to take them down on your first encounter. Much like the game’s narrative, the game’s enemy design lacks consistency but does this in favour of making interesting enemy types that make for dynamic combat encounters that requires you to think on your feet. You’re not just blindly gunning down aliens, you’re also employing best practice tactics to ensure your survival and that you’ll have enough health and ammo for the next encounter. As an aside, Vampires are so annoying, I just wish they would sit still!

Co-op is also apart of this game, and while it’s limited in terms of its options, it’s fun enough to revisit levels from the single-player campaign and experience them with a buddy to back you up. It also helps in clearing the various side objectives and secrets that are littered across each level, as each co-op partner can easily venture off and accomplish side content while the other keeps themselves busy with more shooting that probably needs doing. Side objectives themselves add a little bit of extra variety that rewards you with gun attachments, ammo, health, as well as points to level up various perks that slightly changes the way Sam plays. For example, I opted to unlock an ability that gave me health on each successful melee kill, which made for getting out of sticky situations a little bit easier.

While the entire experience makes for a bombastic ride, there were a few technical hiccups that soured the adventure. One such example would be having to kill every enemy in an area before moving onto the next. Makes sense right? Not so much when the last enemy is glitched running into a wall and took you more than a few minutes to find. These moments are few and far between, but frequent enough that it was worth mentioning. Serious Sam 4 is a game whose ambition verges on the ridiculous, but that’s just this game’s style. It’s at its best when it’s throwing everything and the kitchen sink at you. You don’t care that your PC performance is tanking under the pressure, because the moment itself is so bombastic that it’s almost like your PC feels it too. Serious Sam indulges in its humour and while it doesn’t always land, it’s the continued effort, ridiculous premise and overall presentation that makes it charming enough to be unironically brilliant.

I think Serious Sam fans will definitely get a kick out of this latest instalment, whilst new players like myself will still thoroughly enjoy an old-school FPS that focuses on having explosive fun. A chance to turn your brain off and just play a fun video game. While console players are going to have to go without until 2021, I feel PC players are in for a real treat. And if you happen to be sporting a high-end rig, Serious Sam 4 scales incredibly well in the graphics department. It will be interesting to see how far the engine can be pushed as technology continues to improve, as I believe this game will become better over time as the tech improves. Just how many vampires, lizard men, hammer guys and kamikaze aliens can we have on-screen at once? 100s? 1000s? Now that would be insane.

Serious Sam 4 wears it heart on its sleeve. It knows what it is and leans into it so hard that it’s endearing. The titular character is an amalgamation of 80s action star tropes, with just a little bit of characterization that really makes Sam stand apart from his contemporaries. While the story makes little to no sense, and the voice acting can be very hit or miss at times, it all lends to the game’s overall charm. It’s a game where the objective is to shoot anything and everything that moves on your screen. And if you get caught standing still, you’re pretty much a goner.

With an insane amount of enemies that can appear on screen at a given time and an insane arsenal of weaponry at your disposal, Serious Sam offers a hectic good time for those of us looking to turn our brain off and just get into the flow of blowing up aliens. Not to mention, playing co-op with friends lends to combined bewilderment and joy. However, be aware that this game is a slog on PC with performance being highly variable. It will require a lot of graphical tweaking, but thankfully Croteam has provided a plethora of graphics options which should make finding that performance sweet spot a breeze.