Haven Review – One for the lovers

How far are you willing to go for the one that you love? The half visual novel, half role-playing game, Haven, all about a couple taking to the intergalactic skies, asks you this question and it asks it well. Throughout its time you’ll find yourself coming up with your own answers. A large part of it is thanks to how well you’ll get to know the partners as time goes on. Those threads begin as soon as its gorgeous, water coloured opening cinematic hits you. It’s clear that together, these two characters are an unbeatable force. Through trials and tribulations, love is stronger than anything. Love will take you however far you need to go. Love will conquer all.

Haven has both quite the intriguing narrative and universe going for it. The game follows lover couple Yu and Kay, relatively fresh on a runaway from where they once came. Tired of the tyrannical ruling of the society of their lives prior, they’ve found themselves on the lost planet known as Source, where beautiful views and great mysteries of lost civilisations await. Really, the unknown is worth it for the two of them. It doesn’t matter if they’re being hunted down by soldier robots known as Hornets, facing the threatening fauna of Source, or working out just what that mysterious pink fluid that plagues the islets the duo visit really is. What they have is each other, and that’s enough.

Early on in the game, an earthquake occurs, destroying their Nest, a small spaceship the two reside in and call home. From there, the two go on a journey, travelling between the planet’s islets through means of a light bridge made up of a source called Flow. In your journeying, you’re largely in the search for parts to rebuild the Nest, but that doesn’t mean you won’t unravel some neat little mysteries along the way. Some interesting reveals and a thrilling conclusion are all present in the game, but they’re not the focus. Instead, great amounts of lore, character development, and bonds await. They’re wonderful and welcoming parts to an already otherwise great game.

“Haven has both quite the intriguing narrative and universe going for it.”

In the modest but apt time you’ll spend with Haven, it’s easy to fall in love with its world and characters. This is a game about love between a man and a woman. As an admittedly very queer individual myself, I’d normally roll my eyes at this and not find myself relating all that much. Instead, developers The Game Bakers have not only done a really good job in writing both leads Yu and Kay, but also casting a pair of actors to play them that share a fantastic amount of chemistry.

There’s rich worldbuilding out there to explore in Haven. Give it time and you’ll begin to learn of Yu’s troubled history with her mother. You’ll learn of the complicated, and downright wrong system of the Matchmaking System (yes, a system where people are unwillingly matched with their other supposed soul mate), which caused the couple to flee and pursue their real relationship in the first place. Great joy is even found in discovering the little botanist and zoologist in you, investigating the mysterious flora and fauna of Source. All of this really helps to drive home your experience in Haven and that, even when the environments can feel a bit one-note, there’s at least some history behind them. 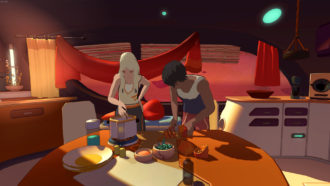 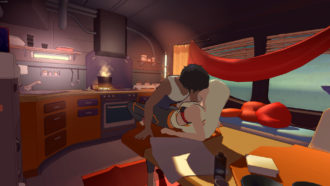 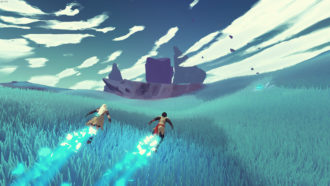 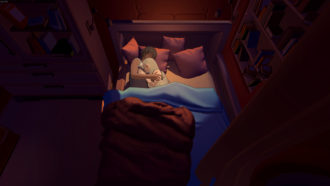 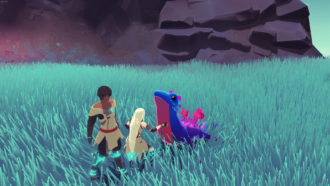 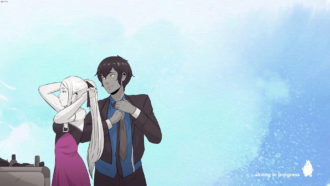 Haven is one of the first successful Love RPGs

Haven is also a very Persona-like game in nature. The closest comparison here is the relationship you’ll build in-game. As the game is largely about couple Yu and Kay, the only real means of levelling up is through building the bond between the two of them. This can be done by doing just about anything with your significant other in the game. Cook a meal together? Watch that meter go up and even see the two comment on the meal they’ve prepared. Receive a nice, scripted visual novel style exchange of dialogue? That meter’ll fill even more. All of this is a joy and simply just makes you feel good as a player. I became excited for the next exchange between the couple, whether it helps with worldbuilding or it’s a delightfully steamy moment. Yu and Kay are characters written so eloquently that capture the feeling of love. So. God. Damn. Well.

I can’t emphasise enough how much of a breath of fresh air it is to have a couple in a video game… actually talk and act like a couple. One instance saw Kay jumping into the shower at the Nest, only to be taken aback by hairs in the drain that were definitely not his, yelling out to his partner. Another saw the pair skinny dipping. Even small touches such as provided animations of the two holding hands and sharing glances as they explore islets, and provided still images in loading screens of the two in domestic situations, it all invested you in the couple.

So much character, flair, and heart shine bright in Haven and it’s a joy to see it all. This game is a mix of a little bit of classic visual novels, character and relationship heavy RPGs such as the likes of Bioware, all with the mix of some Journey (more on that later) style gameplay. Better yet, it actually pulls it off and sticks the landing.

All of this is such a welcome addition to the mix in the otherwise slow grind that RPGs can often bring. You’re telling me all I need to do to get my character’s health and attack powered up is to fill up a meter by experiencing well-written dialogue and cooking with a loved one? Finally. About bloody time. Innovation in RPGs is so important and desperately needed at this point and this is a welcome step.

Journey-ing across the world of Haven

The other large part of Haven that entirely complements its other half is the exploration that comes with it. As alluded to earlier, your main goal in the game is to rebuild your Nest. The way this is done is through connecting a series of smaller islets all part of the planet of Source, accessed by the aforementioned ‘flow’ light bridges. Well, it turns out the element of Flow plays a large part in the game. Yu and Kay both have the ability to glide, ski, and drift across the ground in a Journey-like fashion thanks to the flow that powers the thrusters in boots they both wear. Being previously exposed to the beauty that is Journey, this isn’t a revolution of gameplay by any means, but the way you traverse still feels dreamlike, melodic, and meditative.

Across islets, you’ll also come across threads of flow which Yu and Kay can follow in order to either reach a new, higher up location or just to simply stock up on more of that wicked blue stuff. If all else fails, you’ll see your beloved couple take to gorgeous heights as they skate the thread, making for some picturesque screenshots.

Flow comes in handy too; it’s the number one combatant to rust. Rust is a pink, corroded-like substance you’ll find across Source. It absolutely litters all the environments and to clear it the couple must glide over source points, receiving materials to be later used in various medication such as healing balms, boosts to attack in battle, and more. It’s not the deepest of mechanics but even still, it is a delight seeing rust removed, returning the islets to their prior state in gorgeous hues of blue and green.

Foes will stand in your path in Haven, but thankfully they’re not much of a challenge. Battles take place in real-time, with the face buttons and D-pad buttons on a controller marking the moves for Yu and Kay respectively. A lot of the foes you’ll face are just fauna from Source, where you’ll have to stagger and pacify them so that you can then remove the corroded rust they carry on their backs. This can be achieved by slowly taking turns to whittle down the foe’s health via blasts of Flow from your gloves or melee impact hits. Or, you could go about it in more fun and experimental ways, timing attacks just right to do a double hit on the same enemy, or even chain them to exploit weaknesses.

If I had any complaints about the combat here it’s that at times it’s a bit unclear as to what your enemy’s weaknesses actually are. Improvements could especially be made in signposting some of these when it comes to the robotic Hornets. This can prove a bit of a bummer, needing to make use of trial and error when it comes to toppling your bigger foes. Still, I found myself enjoying combat in this game more than I expected to, which I can walk away mostly happy with. 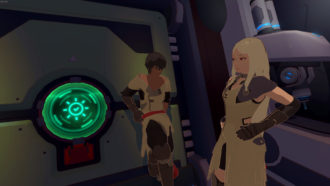 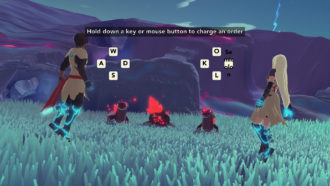 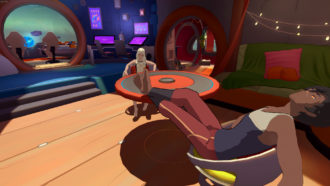 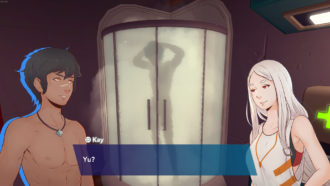 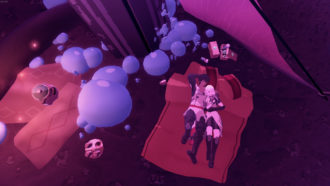 Be it foraging for plants to later cook meals or craft medicine with, establishing Yu and Kay’s relationship further, rebuilding your Nest, or seeing some pretty sweet views, there’s plenty to do in the modest 10-15 hours you’ll spend with Haven. The Game Bakers have done well to show that a AAA budget isn’t needed to create a picturesque experience, just a solid colour palette and art direction.

There really isn’t too much to fault Haven on at all. Sure, it’s a bit one-note in its environment variants at times, but if you consider the scope the game has, it’s entirely forgivable. Too often RPGs are barred down with bloating, needless side quests and the likes to make for a longer experience. Haven is a video game that knows exactly when to bow out and it does so in style.

It won’t really make any game of the year lists, but that doesn’t mean that Haven should be forgotten. If anything, it’s the game I’ve played in 2020 that without a doubt has the most heart in its writing and characters. That’s saying a lot, considering some of the heavy hitters to come out this year.

For hopeless romantics, those in love, those not, Haven is a game I can recommend for just about anyone. With couch co-op also on offer, something I’ve yet to even experience with my partner, it definitely demands a play in that context. I’m excited to return to it in that form and look forward to that day. Until then, I’ll keep loving love. I’ll keep loving Haven.