What do you get when you mix Pokémon with a Metroidvania? Monster Sanctuary exists to answer that question. The role-playing platformer is within a retro-style world where Monster Keepers of ancient bloodlines catch and tame creatures. Keepers will train their monsters to engage in combat and solve platforming puzzles across several different areas outside the safety of the Sanctuary. German indie game developer Moi Rai Games and Denis Sinner have been working tirelessly to recapture and improve on that nostalgic turn-based party RPG. After just over a year in Early Access, Monster Sanctuary feels like the Mega Evolution of the classic Pokémon games.

As a Monster Keeper who’s from an ancient bloodline, you are gifted with a Spectral Familiar along with three other budding Keepers. These are powerful, immortal creatures which are alike starting Pokémon. After a relatively brief yet intuitive tutorial, the young Keepers encounter a group of evil cultists called The Alchemists that practice dark rituals. It’s up to you and your three rival Keepers to put a stop to the mysterious group and save the Monster Sanctuary. 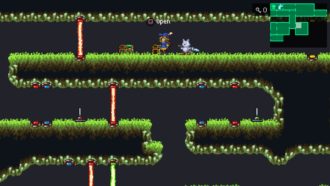 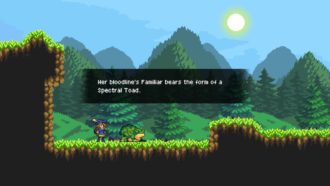 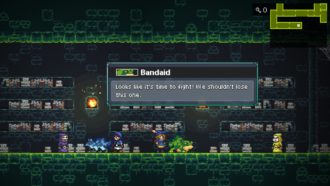 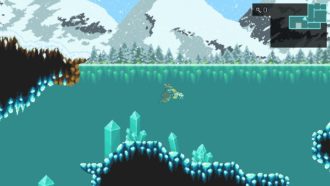 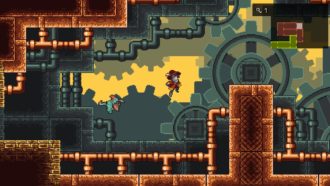 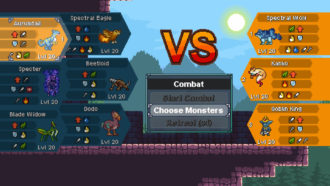 If you’re a fan of old-school RPGs and recent sprite-animation JRPGs, then you may enjoy the adventure of Monster Sanctuary. The main story itself isn’t groundbreaking and won’t be the driving force behind finishing the tale. Much of the storytelling is through text-dialogue, broken up across the journey whenever you reach a crucial encounter. There are additional NPCs to speak to across the world that add context to a lot of the universe, creatures, and history of the Keepers. It’s all serviceable, but not the game’s strong point.

Much of the main dialogue isn’t engaging and mostly feels like exposition. The characters aren’t all that intriguing either. The young Keeper’s rivals and the group of Alchemists are forgettable personalities and not enthralling in any way. The game has such an impressive art style and charming animations, it’s a shame these aren’t used creatively in these short yet consistent dialogue snippets.

Capturing that old-school, monster-training charm is where Monster Sanctuary shines. There is no doubt about the influences on this game. There are over one-hundred memorable monsters to defeat and train in the journey, with sixteen of them being community creations. A Monster Journal describes each found creature in detail, adding to their backstory and explaining their unique abilities. There are so many cute and scary monsters to learn and love, and it’s noticeably clear the developers have put a lot of time into making sure each one is exceptionally designed.

After you complete a three-vs-three battle, sometimes creatures will drop eggs that allow you to hatch and grow monsters. Each has a unique skill tree with affinities and weaknesses, and you can use collectable equipment and food to boost these. You can build support-based monsters that provide buffs to your party, damage dealers that wipe out enemies, or cannon-fodder to soak up the bulk of attacks. At a certain point, you can evolve monsters, too. Doing this opens a fresh skill tree with even more abilities.

There plenty of potential and different playstyles available through this system. It’s not entirely deep, but there are enough different ways to assign skills and maximise powers to keep strategy interesting. I found using Catzerker as my critical damage dealer and a magic-based Vaero quite handy early on. As you delve deeper into the adventure, you’ll quickly learn that focusing on a few creatures isn’t a clever idea as elements and defences will heavily weight any fight. This does keep you on your toes, swapping around your party and on the lookout for new monsters always. However, there is an abrupt difficulty spike with certain Champion Monsters that have little to no vulnerabilities and deal severe damage. 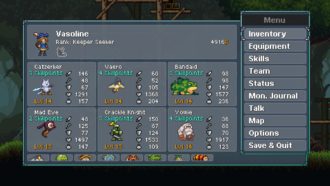 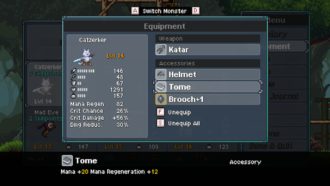 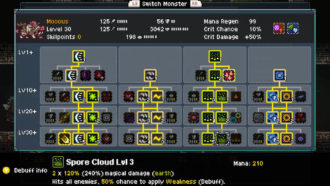 That brings us to Monster Sanctuary’s scoring system. In battles, you’ll be better rewarded for efficiency and taking less damage. This means taking advantage of enemy weaknesses and using combo-hits to rack-up powerful blows. While this mechanic does add a unique layer onto the monster-battle formula, it heavily focusses on winning fights quickly rather than winning them smartly. For example, you could buff your party with one creature, use another as a tank, and have another critical dealer.

Instead, you can get superior rewards for having three big-hitters and wiping out the enemies in three turns but receive more damage. To add insult to injury, all injury and status effects are immediately healed afterwards. Besides six-vs-six Keeper battles and Champion Monsters, there are no repercussions for maximising damage over everything else. It hurts the majority of gameplay as encounters with roaming creatures is most of the game. Admittedly, the scoring is a system that the developers have been tweaking over the Early Access period, but it’s still not right.

“…undoubtedly a game for min-maxers who love weighing-up the odds.”

Regardless, getting the right synergy of skills and monsters is tricky but satisfying. Once you have a decent understanding of all the elemental weaknesses, strengths, and using the right equipment or foods, Monster Sanctuary’s battles are extremely rewarding. It’s undoubtedly a game for min-maxers who love weighing-up the odds.

The 2D-platforming world thrives in regions that drive exploration and platforming puzzles. Each area has a distinct tone and style that makes reaching each one feel like a reward just to see how it may look. The detailed art of the blooming transformation tree in the Ancient Forest or the gentle fall of snow of the Snowy Peaks adds to that overall magic. Traversing these worlds is mostly fun with platforming controls that are fast and comfortable. Taking the time to explore is worthwhile and leads to hidden treasures or exciting fragments of lore, supporting the quest.

The Mountain Path and Blue Caves might be great looking environments, but the level design isn’t exactly perfect. While there is excellent Metroidvania gameplay, returning to parts of levels to unlock doors or complete puzzles that required specific monsters or player upgrades; some of the layouts are simply frustrating. Most puzzles revolve around pushing the correct sequence of buttons or levers to get to a new area or reach a chest. There are no hints for these challenges and they are purely trial and error until you get the right order. It can bring the journey to a sudden stop and feels more like unnecessary filler for otherwise empty parts of the levels. 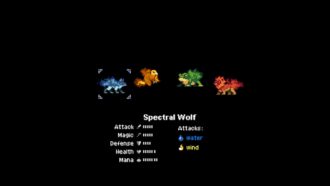 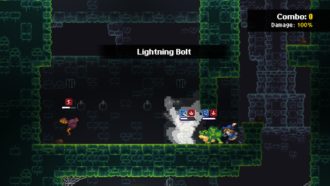 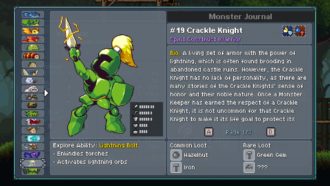 Other level challenges revolve around the use of creature abilities, like flying monsters that can lift you over areas or others that can summon objects to place on buttons. This mechanic is quite interesting initially. Encountering an obstacle and capturing the right monster to overcome it feels rewarding. Once you have a sizeable number of creatures, this eventually becomes tedious having to swap between creature abilities. There is a clear opportunity to mix and match abilities to achieve more complex puzzles, but that isn’t explored, unfortunately.

Post-game content has always been an exciting challenge in Pokémon and is the same here. The quest continues to become a true Keeper Master, rising to the highest rank in the order of Monster Keepers. The goal is to find and defeat all the remaining Champion Monsters, some of which are only available after finishing the main story. After you do that, an ‘Elite Four’ within the exclusive Eternity’s End area opens in the Keepers’ Stronghold; a task to indeed prove your worth.

Monster Sanctuary doesn’t shy away from XP grinding, and the post-game content is almost impossible without it. Monsters level up to godly numbers, and there will still always be another enemy that stomps on your entire party. Online play against friends is also available to put your party to the test. This difficulty will be fantastic for most players who cherish the art style and monster-capturing gameplay. For those who dislike this sort of game, it’s obvious you should steer away.

Many of us have been waiting for Nintendo and the Pokémon Company to update the formula. Well, Dennis Sinner and Moi Rai Games have gone ahead and done it for them. The unique mix of party-based RPG gameplay and Metroidvania style levels introduces a strangely enchanting combination. The hundred-strong roster of monsters is distinct with diverse skills and fantastic pixel art that compliment the outstanding environments they roam around. There are still a few changes needed to the combat systems, and some of the level design is sadly disappointing, yet the fascinating world of creatures gets its hooks deep with almost 30 hours of potential gameplay. Monster Sanctuary is a fantastic innovation on the monster-battling genre, creating a deeper and richer game.