My relationship to the written works of George Orwell is, like many other Australians my age, “those depressing books they made us read in high school”. Sure, I respected the ideas behind his novels even then, but I simply had no interest in engaging with Animal Farm when I had Mass Effect 2 to play.

It must be recognised that this point of view is evidence of the enormous privilege I enjoyed; to be given a book like Animal Farm to read and study. Co-founder of developer The Dairymen Imre Jele grew up in Hungary during the Cold War, during which many texts criticising the USSR were banned – including George Orwell’s Animal Farm. Adapting the book into a game has been a passion of theirs for many years, and with a partnership with Orwell’s estate, it’s finally been made possible. Orwell’s Animal Farm – the game – is a visual novel with light resource management elements, developed alongside the creators of Reigns. It features a simplified version of the story and even multiple endings to the game, so you can experience a “what if” style ending to the original tale. And while this is a great premise for a video game adaptation of such a classic novel, its implementation leaves much to be desired.

A short summary of the novel for those who have never read it: The animals who live at Manor farm become sick of working all day while their human farmer reaps all the benefits. After chasing him away from the farm, they set up a society of their own and decree that from now on, all animals are to be treated equally… so long as they stand on four legs. They call this system ‘Animalism’, and are sure that their new way of life will be better for them all. Spoiler alert – it isn’t.

The game takes you through the events of the novel, starting from the revolution that evicts Farmer Jones from the farmhouse. Your task is to direct the farm animals in their daily tasks, managing their strength and morale, and ensuring they don’t die of hunger or cold. While it initially seems easy, it isn’t long before harsh winters and aggressive neighbours make keeping everybody happy impossible. Depending on what you choose to do, characters may die earlier – or live far longer – than their book counterparts, or the fate of the whole farm may change. 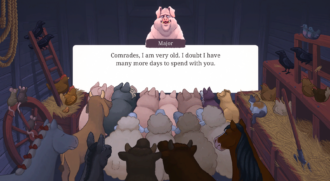 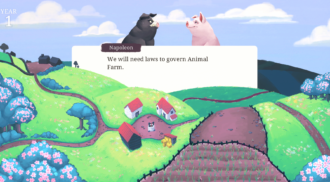 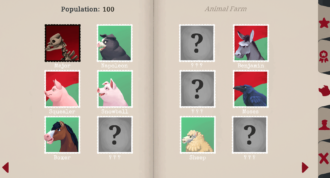 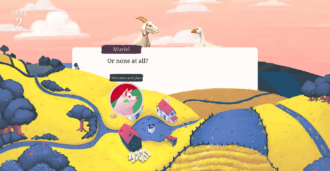 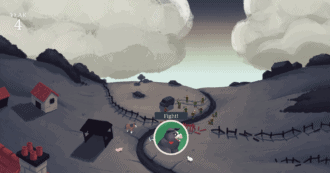 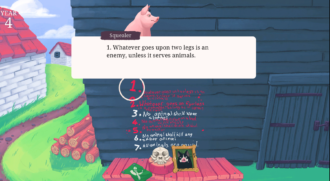 The decisions themselves are simple: the pigs – the allegorical leaders of the game – announce what needs to be done, and you click on the animal that proposes the best solution. Certain actions will affect the animals’ belief in Animalism, how much food and shelter there is for the winter, and how protected the farm is against human attack.

While the choices regarding food and shelter have apparent consequences, Animal Farm is not always transparent about many of the choices you make.  You’ll need to employ some trial and error across multiple playthroughs, but after more than three runs of the game, I am still not certain I understand which choices are important. Purposefully changing up most of my decisions seemed not to have any effect at all, yet on one occasion I got a different outcome for a reason I still can’t determine. Part of me is sure that this is part of the point, that the game was showing me that my choices would not win out over Animalism’s fundamentally broken system. But if that is the case, I wish they made their point in a way that was more poignant and less vaguely frustrating.

“I wish they made their point in a way that was more poignant and less vaguely frustrating.”

The visuals of Animal Farm is easy on the eyes, with each scene illustrated in a detailed picture-book style. But there are very few unique illustrations, and as the years go by they become old quickly. The same can be said for the narration when reading out an event that occurs multiple times throughout the game.

As you become familiar with the routine of the animal’s daily lives, it’s easy to blaze through the game in an hour or less. It also becomes hard not to wish for more complexity from either the gameplay or the story.

The text of the book is simplified to suit the new visual novel style, which makes for a shorter, more streamlined version of the story. It gets across all the most important points, like Animalism’s seven commandments and the iconic quote “four legs good, two legs bad”, while replacing most of the text with short descriptions of events. Descriptions are narrated by the lovely voice of Abubakar Salim, who is the voice for Assassin’s Creed: Origins protagonist Bayek, which gives the feeling of relaxing with a nice audiobook for the evening. The animals themselves aren’t voiced, which is a shame for such a dramatic tale.

I hoped that the game would spend more time exploring the novel’s themes in-depth, but much of the novel’s nuances and details are lost in this adaptation. That mightn’t have been such a bad thing if the game’s only mechanics, branching paths and resource management, were engaging enough to carry the game on its own, but they aren’t. It really needed to have at least one or the other – an in-depth exploration of the story or engaging gameplay – but with neither, it’s not likely to hold your attention for very long. I hoped that I might at least be able to recommend the game as a ‘lite’ version of the book, perhaps even useful to give to school students as an introduction. But due to various bugs and continuity errors, I can’t do that either.

The errors occurred too many times across my playthroughs for me to dismiss them. These included continuity errors – which is a cardinal sin for visual novels as far as I’m concerned – and plain old graphical bugs that made the character portraits act strangely.

In one instance, I noticed one day that Napoleon the pig had quietly died without so much as a peep. Strange, I thought, for one of the major characters of the story. It was stranger still when his funeral scene was suddenly triggered after a battle in year 3, as if he had been there all along. In other instance, several animals died in a battle only for the game to trigger dialogue for those characters as if they had merely been wounded. There are less grave errors, too, that involve lines of narration being triggered in odd places, and character portraits failing to appear. All things considered, it doesn’t look like the game’s structure is 100% solid.

At the very least, Orwell’s Animal Farm made me want to read the original book after a decade of resenting its inclusion in my high school curriculum. I can see what the game was trying to do, and I had a passing amount of fun with it, but it’s just not engaging enough to play for more than a few hours. I can recommend Orwell’s Animal Farm only as a curiosity for fans of the novel. If they’re able to fix the scripting errors and glitches, that recommendation might be extended to a classroom as a great introduction to the novel to younger students. As a game, it falls far too short to be worth your while, even with the relaxing tones of Abubakar Salim to narrate the experience.