The Atelier series is an RPG series that is now 22 games deep with Atelier Ryza 2: Lost Legends and The Secret Fairy. Despite being nearly two-dozen games in, this is only the second direct sequel in the entire franchise. The developers at Gust don’t need to establish new characters or a world to explore. Instead, Atelier Ryza 2 extends the titular protagonist’s adventure and introduces improvements to abilities, exploration, monsters, and dungeons. While the gathering and synthesis gameplay remain solid, many of the Atelier series’ flaws still break down an otherwise fun JRPG.

The sequel to Atelier Ryza: Ever Darkness & the Secret Hideout picks up where the story left off. All the familiar characters return after three years of studying, questing, or travelling as their journeys dictate at the end of the last game. Ryza receives a strange orb and is asked to leave her alchemist studies to return to the capital city of Ashra-am Baird to reunite with old friends Tao, Klaudia, Lent, and meet some new allies. From here, she and her friends set out to investigate this orb’s origin and expand their knowledge of alchemy.

The Atelier games’ story is very stock-standard JRPG fan-fare, and Atelier Ryza 2: Lost Legends and The Secret Fairy is much of the same. Ryza is an optimistic and determined character who radiates ‘protagonist syndrome’ – she is morally good and dedicated to her friends and quest to a boring fault. While the focus is always on Ryza, other characters often have more interesting quirks and personalities that don’t get enough attention. A quite intuitive quest journal details precisely what has happened in the story and an interesting exploration diary tool that supports the main quest. Otherwise, the story is unfortunately bland.

There is a decent amount of anime fan-fare in Atelier Ryza 2. Compared to the first game, the narrative has a stronger focus on the ‘slice of life’ elements with plenty of tropes. For example, playful hints at Tao and Ryza being so close of friends that they could be intimate, followed by a bashful and awkward moment. Don’t forget an abundance of close-ups of Ryza’s backside when she crawls through small spaces and jiggle-physics when she runs. Admittedly, there’s an exact target audience who will love these features and more power to them. From a wider-perspective, these clichés are way overcooked.

“The deep JRPG gameplay systems and combat are the lucky elixirs to the underwhelming plot.”

The deep JRPG gameplay systems and combat are the lucky elixirs to the underwhelming plot. When fighting monsters, unique turn-based combat that incorporates real-time elements adds an energising twist. Time moves continuously while the players choose to attack or defend with the characters in their party. It’s similar to Ni No Kuni: Wrath of the White Witch’s combat and previous Atelier games, with time-based actions within the real-time battle.

The difference in Atelier Ryza 2‘s battle system is in its fluency and action. Ryza and her friends can now combo attack monsters, by repeatedly using standard attacks, to add a bit more excitement to fights. Special moves can be combined for devastating combos, using up AP points generated from standard attacks, and matching with allies requests for powerful team specials. Animations are also shorter, and the user interface has a more straightforward design. The changes make combat more thrilling, although slightly less tactical than previous editions. Taking care of the party and thinking about which attacks to use won’t be an issue during combat unless the group engages a brutal boss enemy, which may be too simple for some players.

After defeating enemies, Ryza and friends will find materials for alchemy and synthesis. This is where the Atelier series defines itself from other JRPGs. While exploring the vast world, gathering resources with different equipment is the main task of the game. Players will need to use a staff, scythe, axe, fishing rod, bomb rod, hammer, or the new emerald band to pick up materials from sources. These are found literally everywhere.

Remember when you first start an MMO and get your first fetch-quest to collect five berries from bushes? Atelier makes that quest the basis for the entire game. There’s so many various resources to gather from and ways to do so from many environments. The game boasts new ways to explore as well, including diving underwater, climbing vines, and magic ropes to travel between areas. These honestly don’t change the gameplay too much and just feel like nice additions to add variety, which is unfortunate for how much it’s emphasised, but a welcome addition in an otherwise dull gameplay-loop. 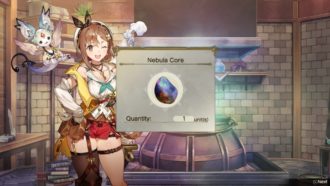 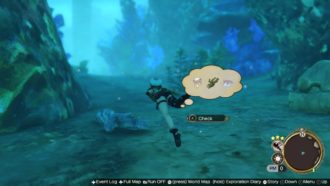 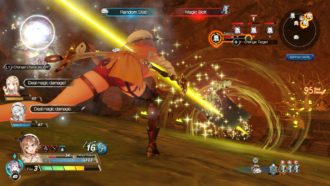 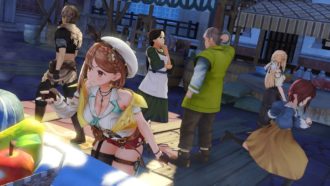 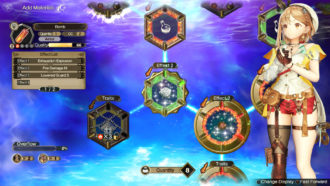 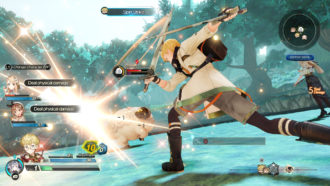 Ryza, who became a master of alchemy in the previous game, has somehow forgotten all the recipes she learned with no explanation. Instead of reaching certain Alchemy Levels to unlock recipes, players will generate SP throughout the adventure which they can use to reveal recipes on a large skill tree selectively. Grinding synthesis to generate experience points and create the next key story item is no longer a painful task with this change in Atelier Ryza 2.

Synthesis is the process of mixing resources to create these new items the characters need. Understanding which materials work best, how to take advantage of individual traits, and the method to do it all in is a fine art. The tutorials are relatively dry, but will walk new players through the whole system. However, the mixing mechanics in Atelier Ryza 2 are much more simplified and intuitive than usual, making it easier than ever to comprehend what is going on.

Gust has evolved the Linkage Synthesis system from the previous game with greater depth. Players can now simply fill Material Loops with the needed ingredients and synthesise everything they need, whether that be equipment or medicines.

“Synthesis is indeed the most fascinating part of Atelier Ryza 2 and fans new and old will enjoy the new features with delight.”

Essence is a new feature allowing Ryza to alter an item’s elemental trait during alchemy, essentially transforming the Material Loop and the final product can take on new qualities. Synthesis is indeed the most fascinating part of Atelier Ryza 2 and fans new and old will enjoy the new features with delight.

Running on the Nintendo Switch, there are almost no performance issues throughout the entire journey. The game runs excellently for how large most of the colourful and diverse environments are.

There are dense cities of bustling streets with fountains and lamp-lighting at night. There are bright forests with trees and gaps to traverse, sparkling lakes to dive into, and dark caverns to explore. Coupled with the detailed fantasy character design, this anime universe is absolutely fantastic to see. The animations can often be a little funky, particularly with stiffness during in-game cutscenes; however, it doesn’t hurt the gameplay by any means.

Atelier Ryza 2: Lost Legends and The Secret Fairy is an adventure for all JRPG lovers. The game undeniably has a niche audience and many of its features won’t appeal to the majority. The obsessive anime tropes, repetitive gathering, and a somewhat plain story will surely stop some players from picking this game up. Although, there is still something special brewing in Atelier Ryza 2. It features an outstanding art style with a deep and unique alchemy system that can only be found in this franchise. This edition certainly makes it more accessible than others while still appealing to the die-hard fans. Atelier Ryza 2: Lost Legends and The Secret Fairy will not be for the average gamer but will undoubtedly be a great 20-30 hour adventure for series veterans.