Scott Pilgrim vs. The World: The Game – Complete Edition Review – Welcome back, Scott

Scott Pilgrim vs. The World: The Game is a strange case. Although it released to generally positive reviews in 2010, its claim to fame has more to do with its disappearance from storefronts than any award or achievement. Generally believed to be a case of an expired license, it was removed from stores in 2014. Now we’ve finally got it back for Xbox, PS4, PC, and Switch. Worthy of note here is that this is not a remaster nor a remake – this is a rerelease, virtually the same as the original but with all DLC characters and game modes included. This is it: what we were missing out on all those years.

I played the original game briefly while it was still available, and I vaguely remember it being very good. I remember how good the game looked and the great soundtrack, and I remember me and some friends having a great time despite getting our asses kicked. So I was obviously stoked to get a chance to own the game for myself and play it again. Well, now I have. And while it’s a solid staple of the classic 2D Brawler genre, I can’t help but think that absence made my heart grow a bit fonder than is perhaps due.

The Scott Pilgrim comic series follows the titular 22-year-old’s journey to win the girl of his dreams by defeating all of her evil ex-partners. It’s set in a world that’s a hybrid of video game fantasy and real life, where Scott can use overpowered attacks to battle his enemies who explode into coins when defeated, and yet he still needs to get a crappy job to pay rent. The constant references to video games are used as an illustration of how Scott sees his place in the world, which is why Scott Pilgrim vs. the World: The Game is such a perfect choice for a video game tie-in.

The game could be an item snatched right out of the comic’s universe itself. It is unapologetically video-gamey, with bit-crushed sound effects and secret cheat codes. It does everything in its power to look and feel like a classic 2D brawler you could find at a 90’s arcade. When it comes to the look and feel, this is amazing. The stylised designs are a perfect pixelated adaptation of Brian O’Malley’s characters, and each level is stuffed full of background details that make the stages come alive.

It’s decently hard, too; and I mean old-school tough, where even the easiest difficulty can and will kick your ass. I’m sure experienced brawlers will appreciate the genuine challenge, but it’s incredibly unfriendly to newbies. There is very little in the way of a tutorial, nor much of a chance to grow used to the controls before multiple enemies start throwing themselves at you. If you’re a newbie flying solo, you’re in for a punishing time. Playing with others will give you more of a fighting chance, but it’s still no cakewalk.

“Even the easiest difficulty can and will kick your ass.”

Each playable character has their own moveset and abilities, which you can unlock by levelling up. You can also increase a character’s stats by buying food in shops. In theory, this should be a reward for playing a character for a long time, but in practice, it ends up meaning that characters are severely underpowered until you spend enough time grinding them for XP and money.

Apart from that, the only gripes I have stem from its dedication to emulating a classic beat-em-up, which is a genre that I never really resonated with. Player movement is annoyingly slow, and hit detection can be finicky; often deciding that your attack completely misses because you weren’t exactly in line with your target. 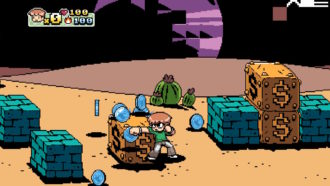 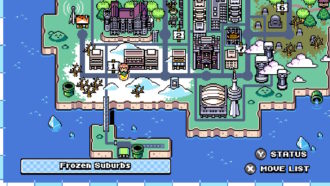 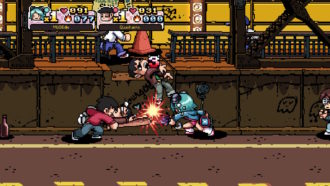 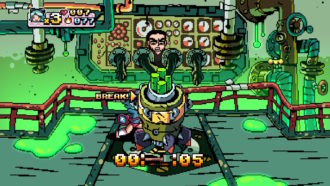 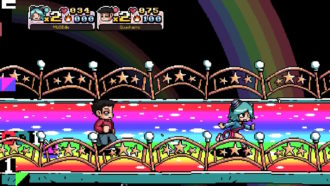 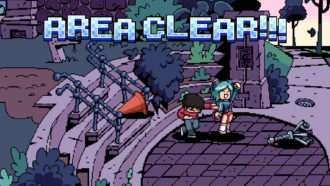 Despite these gripes, Scott Pilgrim vs. The World is still fun. There is some creativity in the stages that go beyond what I expected, and the bosses are satisfying to take on. The extra Boss Rush mode lets you cut the fat and just take on those cool bosses is particularly fun. Playing with friends erased some of the frustrations that I suffered playing solo, and there are various abilities that are in fact only usable with another player character in the fray. The soundtrack, a masterpiece by chiptune band Anamanaguchi, kicks into high gear right away, and it’s catchy as hell. And despite the fact that I resented having to level up the characters make them useful at all, I can’t deny the satisfaction I felt upon getting that that sweet level-up mid-battle, restoring all my HP and rewarding me with something new.

The game is undeniably intended to be played with at least one friend, which is why it’s great to see the addition of online multiplayer. Couch co-op is still on the table of course, but now you can jump online and play with others whenever you like, which is all the more important these days. Once online, all stages are unlocked regardless of how far you’ve gotten in single-player mode, meaning that a new player can host a play session just as easily as a Scott Pilgrim veteran. On a curious note, the game requires you to have a Ubisoft account to play online for some reason, which is just yet another online account that you’ll need to sign up for and never touch again.

If you played the original release to bits and have sorely been missing its absence, this rerelease will be everything you wanted. For those of you like me who perhaps have let your nostalgia for it run away with you, it’s still a good game – but it’s no masterpiece, especially for those who are not fans of old-school beat-em-ups. It’s a little dated now since games like Streets of Rage 4 have raised the bar for the genre, but Scott Pilgrim vs. The World: The Game – Complete Edition is still a fun, nostalgic title that’s great to play with friends.