Curse of the Dead Gods Review – An affliction of fun

A calling beckons you deeper into the accursed temple. Your hunger for wealth and power grows. Formidable foes try to stop you at every turn as you move through the twisted and trap-riddled dungeon. You battle curses and learn to harness the powers of light and dark to your advantage. You uncover powerful runes and weaponry as your journey takes you deeper and deeper into the realm of the gods. Do you make it out alive or do you go down swinging, ready to start your descent anew?

Curse of the Dead Gods is a Roguelike Dungeon-Crawler releasing out of Early Access on PC alongside its simultaneous PS4, Xbox One and Nintendo Switch releases. It challenges players to brave its labyrinthian dungeons, battle its gods and hopefully come out triumphant with new riches and rewards in tow. The action-centric gameplay will feel familiar to gamers who have played similar titles such as 2020’s breakout hit, Hades. Although even in a genre of games that already contains so many amazing releases, Curse of the Dead Gods still finds a way to feel impressive and exciting.

The game has been in Early Access on PC for about a year and you can really feel the benefits of that extra development period. The game is polished with a lot of depth to its systems and mechanics. The movement and combat instantly felt good. You’ll be hacking and slashing your way through enemies utilising a range of different weaponry, all with their own unique attack patterns. Dodging or parrying enemy attacks is a must because health is a finite resource and not one that’s often easy to replenish. The game also allows you to carry three weapons at once, a primary, secondary and two-handed weapon. Utilising these intelligently will grant you options in combat and facilitate the use of powerful combos and finishers. Charged attacks, critical hits and clever use of your environment will also play a part when facing deadly enemies. Safe to say combat in Curse of the Dead Gods is varied enough to give players all of the tools needed to deal with whatever dastardly obstacle comes their way.

As you progress through the game’s many rooms you’ll not only fight enemies and dodge traps, but you’ll also find powerful upgrades and items that will help you grow stronger and keep up with the ever-increasing threat. New weapons and runes can be found, stats such as health and attack can be increased, weapons can be upgraded and more. Like many Roguelikes of its kind, the game requires a good amount of strategy when deciding which path you’ll take to plot out your route to success.

Everything about Curse of the Dead Gods feels really good. The game is clearly well designed with every system and mechanic working together to create a balanced and thrilling experience. There’s a level of polish here that’s above commendable with not a single bug or inconsistency dampening my play. The difficulty curve feels really good too, with early dungeons being much smaller and easier, easing players into the experience. The more you play, the more you’ll unlock. Permanent upgrades will be essential to your success as the game’s dungeons get more and more challenging. New weapons can be unlocked for future plays, passive abilities can be unlocked that assist you in your runs, and alters can be purchased and upgraded that let you select your starting weaponry.

Unlike some other games in the genre, Curse of the Dead Gods definitely feels like a journey. It’s not a game you can beat the first time you play it, with progression and unlocks playing a big part in your potential success. I was a bit concerned by how easily I was able to complete the first few dungeons, but by the final one the game was undeniably kicking my ass. This is great because the game is finding a way to provide a challenge without ever feeling like you hit a sudden steep learning curve or difficulty spike. It guides you through the experience and gradually forces you to play better and better and learn its systems. By the end you’ll be attempting to play every room to perfection, avoiding as much damage as you can whilst you strategically plot your path and amass the weaponry, runes and upgrades you need. You’ll be comparing every single passive stat and balancing your needs for gold, health and more.

“Where the game distinguishes itself from similar titles is in its unique and often game-altering “curse” system.”

Where the game distinguishes itself from similar titles is in its unique and often game-altering “curse” system. As you play you’ll build up your curse meter by entering new rooms or getting hit with some enemy abilities. Once you accumulate enough, you’ll be hit with a curse that can change the way you play the game from that point on. These curses are often powerful double-edged swords, with both advantages and disadvantages depending on the situation.

The curse system is great and clearly instrumental to Curse of the Dead God’s identity, given that it’s part of the game’s name. It’s one extra thing for players to focus on, requiring them to balance how many curses they are willing to accumulate before they’ve gone too far. It adds yet another layer of strategy whilst also suddenly altering the play space and forcing players to adapt to an ever-changing environment. As much as I do love this system, I also think it’s probably the area that would most benefit from even further expansion. After a few runs you’ll be afflicted by the same curses fairly frequently, with some curses in particular feeling more common than others. It’s also one of the only systems in the game that doesn’t really evolve the more you play. I like unlocking new weapons, seeing new gods, fighting in new dungeons. So if the developers ever revisited the curse system and gave it more depth, I’d be a very happy gamer. 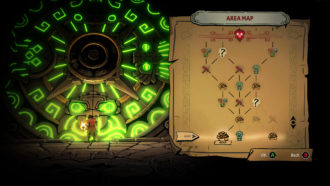 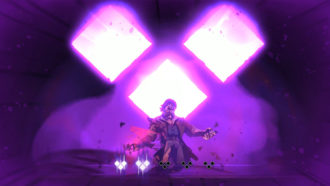 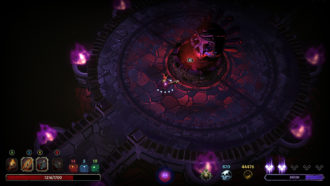 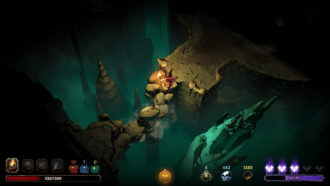 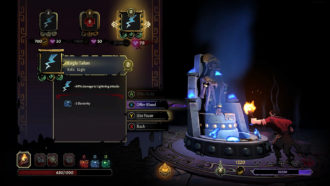 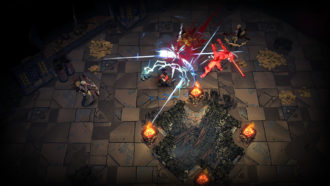 Stylistically the game is impressive and more than functional. You won’t get the personality or the narrative of a game like Hades, although to expect that in every Roguelike Dungeon-Crawler would be a bit rich. What you will get however is a praiseworthy, dark and daunting aesthetic that’s easily readable and allows for precise and satisfying gameplay. Weapons hit with some oomph and the myriad of different enemy attacks and environmental hazards will have you zipping around the dungeon in a frantic yet controllable manner. Battling light and dark also comes into play with different buffs and debuffs impacting the way you use or don’t use light to your advantage.

Altogether there’s a lot to love in Curse of the Dead Gods. It’s a challenging action experience that’ll have you playing run after run, hungry for the taste of sweet victory.

I really really enjoyed my time with Curse of the Dead Gods and am happy to call this a great game. It’s an idea that’s been done before, but Curse of the Dead Gods executes on that idea almost flawlessly. The game is polished and deep with a really solid amount of content that’ll keep players entertained for hours. For those seeking a challenging combat Roguelike game, you won’t be disappointed with this release.