Encodya Review – A point and click in the wrong direction

Encodya is a point and click adventure game set in the grim cyberpunk world of Neo-Berlin in the year 2062. The game is developed by Chasmonger Studio, and follows nine-year-old orphan Tina as she, alongside her robot companion SAM_53, try to learn more about her past and the state of the world she lives in. Like most point and click games, the backgrounds are pre-rendered, but unlike more traditional entries in the genre, the character models are 3D cel-shaded, instead of 2D.

When it comes to story and themes, it feels like Encodya gets a little lost and muddled. Like it isn’t sure whether it is taking a playful jab at society or if it wants to get on a soapbox and teach a real lesson. The city of Neo-Berlin is currently run by Mayor Rumpf, a poorly tempered, corrupt politician who is up for re-election. The similarities between real-life events that happened literally a few months ago will not be lost on anyone. This caricature of America’s very recent president is used almost entirely for laughs, which would be fine if that was the direction the game wants to take its tone. Though it also uses virtual reality as a substitute for hard drugs and says that the government is using it to control the populace, which is presented completely straight. It’s hard to know which parts of the world are meant to be a joke and which are meant to be serious.

Mayor Rumpf also isn’t the only use of referential humour in Encodya. This is a personal bias, but I just don’t find these kinds of referential jokes funny, so it grinds my gears to see them used with such frequency. There’s an NPC clearly meant to be Bill Gates and very frequent jabs at the tropes of video games as a whole. At one point a character straight up dropped the name of well known terrible song Darude – Sandstorm and I had to stop playing for a few minutes to calm down.

A lot of the voice acting also feels incredibly unpolished. Usually this wouldn’t be an important criticism, but in a game that tries to make jokes as frequently as Encodya does, it’s necessary for your voice actors to be able to get the comedic timing right. A lot of jokes that might have been actually funny fell flat due to poor execution. 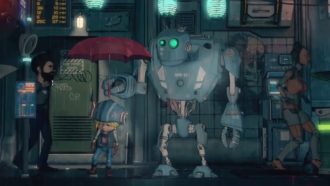 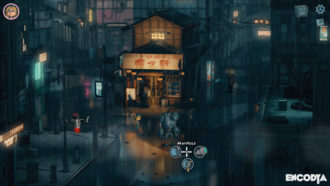 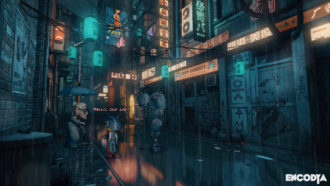 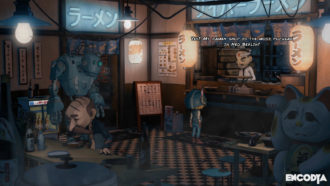 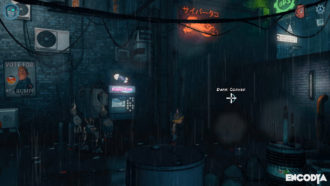 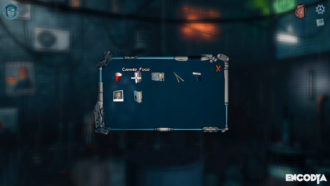 Encodya’s gameplay has some problems as well. The UI makes clear sense, and there is a handy mechanic to highlight all items on the screen which negates any pixel hunting if that’s an issue for you. Despite this though, I still had a few issues where the game did not correctly telegraph what I needed to do. On one occasion I was trying to reach something with a stick. Although when I tried to do it, Tina said “that doesn’t work”.  At this point I assumed the solution would be a completely different item I hadn’t found yet. As it turns out the stick was the correct solution, it just needed to be longer. A small change of dialogue to “if only it was a little longer” or something similar would have pointed me in the right direction. There were also two times when I entered a large apartment building and had to check every single door until I found the correct one. This is not a puzzle, this is my own personal hell.

A couple of elements I did really enjoy though include the relationship between Tina and Sam. It’s really good, and switching between the two of them to complete different tasks is clever. The backgrounds are also gorgeous, all wet asphalt with neon lights bouncing off it. The game does an amazing job of making Neo-Berlin feel vivid and alive. Music is also a key element that is used very well. The soundtrack is understated, but very moving when you take the time to listen to it while trying to figure out a puzzle.

My favourite part of Encodya is when you find a diner performer suspended inside a glass tube and she tells you that she lives underground until someone requests a song, then she hops in the pipe and is brought up to the diner. Such cool world-building. I was so invested in her and helping her escape. I wanted more of that. I wanted more of these moments. More original concepts that I hadn’t seen before that engrossed me into the world and the narrative.

Encodya undeniably has some great elements that if expanded upon could have made for a really touching and special game. Although as it stands those moments are a little too few and far between.

I’m a big fan of point and click adventure games, and Encodya was such a genuinely earnest attempt at capturing the magic of the genre that I’m disappointed I didn’t enjoy it more. I wanted to like it, the whole time I was playing I was waiting for a moment when I would realise that I was loving the game, but it never came. It was too referential and the puzzles too simple for it to capture the feeling of a King’s Quest or Monkey Island. I can see elements of what is a very good game, but as a whole, it falls a little flat.