Mutropolis Review – The ghosts of memes past

It’s the year 5000, you are an archeologist discovering the bygone wonders of Earth. Mysterious objects like credit cards and power plugs confound you. Your name is Henry Dijon, and you and your team are searching for the legendary Mutropolis. Though, it seems that you are not the only ones.

The game follows the story path from the perspective of the protagonist Henry Dijon. He is more than a little enthusiastic about archeology and is very protective over his trusty trowel. Henry, along with the rest of his teammates, follow along under the guidance of their professor, Totel. After the cataclysm of Earth almost three millennia prior, the survivors fled to mars to start a new way of life.

Now, humanity and its curiosity has lead adventurers and academics back onto the Earth’s surface, to study and solve the mysteries that lie therein. One of these mysteries is the whereabouts of the legendary Mutropolis. Though, like in every good story, things don’t go the way they had planned.

Before you are even playing Mutropolis, you are hit with the familiar face of Grumpy cat on the loading screen. This sets the stage for the kind of game this is going to be. One thing that Mutropolis does NOT do, is take itself too seriously. In fact, one of its greatest points is that it wants to make the player chuckle. If not for its comedy, then for its absurdity.

Starting the game, you are thrown into the first act with no real explanation. This is where one of the elements of Mutropolis begins to already shine. The game doesn’t hold your hand at all. Instead, it encourages you to get into the mind of Henry, to uncover the story around you. Just like a real archaeologist would… although it needs mentioning, that unlike real history, Mutropolis is about as historically accurate as an iPhone in an 80’s movie, and it thrives on that fact.

The controls are very simple, as they are for most point and click games. All you have to do is mouse over an object or person in the game, click to interact, and voila. Interact with a left-click, deselect with the right, the scroll button for inventory, and the eye symbol to investigate your items. These simple controls help leave more room for your brain to work, and you’re going to need it.

Mutropolis is full of riddles and mysteries you’re going to have to solve in order for you to progress the story. One thing I loved about Mutropolis’ puzzles is how challenging yet fresh they felt. Some areas would be easy to solve, while others left me scouring the room 30 times in frustration. It was never a bad kind of frustration though. The light-hearted charm of the game kept me going and motivated to find a solution. If not for the story alone, then for the chance to find a pop culture easter egg or great memes of the past. Trust me when I say you will be cracking a smile more than a few times while playing Mutropolis. 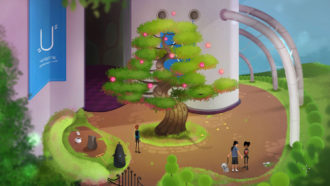 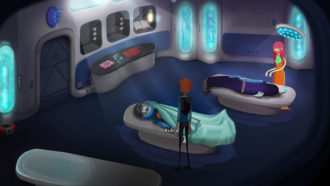 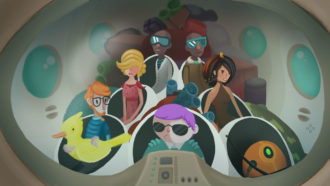 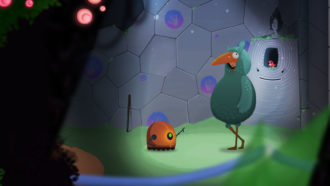 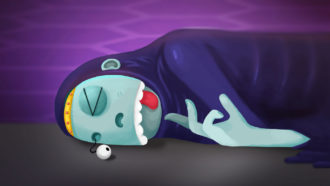 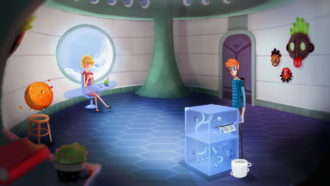 If the story and adventure alone aren’t enough to get you into the game at first, then the visuals will. Mutropolis is a colourful wonderland of beautifully hand-drawn illustrations. There is simplicity meeting detail in all the right places. Each character wears their personality in their design and is brought to life by wonderfully fitting voice acting. What felt like hours playing in Mutropolis could well have been minutes or vise versa.

The atmosphere and puzzle-solving kept me so involved in finding clues and solutions that time just flew. By the time I had realised it, the game was over. It was a little disappointing that it felt like such a short experience overall. Though it may just be that my puzzle-loving brain powered through the content much faster than Pirita Studios had expected.

Mutropolis is such a pleasant surprise of a game. It holds within it so much charm and character that I was not initially expecting. There is a good balance between simple and challenging puzzles, so you feel rewarded instead of exhausted when solving them. It doesn’t take itself seriously, which I just loved. It let me just relax in the silliness and absorb myself in finding solutions and thinking of ways to use items.

Though I really loved playing Mutropolis, it just feels like they left so much space for there to be more content. My hunger for puzzles wasn’t fully satiated. Though who knows, maybe this will leave Pirita Studios with more room for DLC or perhaps even a sequel. Either way, I would love to see more of Mutropolis in the future.