When I first heard of Orange Cast: A Sci-Fi Action Game, I was excited. For one, it was advertised as being “inspired” by one of my all-time favourite sci-fi shows, The Expanse. The world of The Expanse is part dystopian, part cyberpunk, part Star Trek, all badass. The badassery extends to the narrative, the space combat and also the show’s characters, who are multi-faceted and are easy to fall in love with, even though they are all very flawed. Also, the devs in their press kit said the art design and narrative structure “tries to be similar to the first Mass Effect installation” which of course, was also an exciting prospect.

However, I should have also been sceptical, as these two franchises are massive not just in their popularity but also in their scope. Unfortunately, my excitement was crushed pretty quickly once I started playing Team Rez’s third-person shooter.

There are a number of issues with Orange Cast, but the first that really sticks out is the broken English subtitles throughout the majority of the game. These grammatical errors are literally everywhere and make the game seem like it’s in BETA stage and not a finished product. This made the narrative of the game extremely hard to understand, especially seeing as the protagonist would automatically move to different locations without any real explanation.

Most of my understanding of the game’s plot comes from its press kit and not the two random NPCs who tell your character what the hell is going on… or try to anyway. The kit says: “As humanity’s elite space trooper, you take on a heroic, action-packed adventure throughout the galaxy. Explore planets, protect colonies and be the first to meet the unknown!” Really what you do is go around shooting anything that shoots you, even though I’m not quite sure who they are or why they want you dead. There is one alien-looking NPC who you talk to and answers your questions, but the narrative is so convoluted I was more confused than enlightened by the end of our time together.

Combat is pretty straight forward though clunky at times and the short prologue doesn’t give you enough time or information to really understand the weapons on show. When throwing a grenade for the first time, I thought it would explode and hurt nearby enemies, but instead it opened up some sort of force field and did nothing at all to the enemies surrounding me.

A helpful mechanic is the shield, which you can put up anytime during battle. This adds a lot of health to your protagonist and makes shooting a whole bunch of bad guys a lot easier. When you down enemies you can pick up their discarded weapons, but it doesn’t do anything other than give you extra ammunition for your current weapon. It would have been nice to be able to pick up and play with different weapon types, but the game just doesn’t seem to want to be that ambitious. This brings me to how Orange Cast has labelled itself an “RPG”, yet I couldn’t find any RPG elements throughout my time with the game. There is no progression system and the protagonist doesn’t seem to level up at all. It plays like a straight third-person shooter and there is nothing at all wrong with that – it’s just annoying that the devs have advertised it as something that it isn’t.

Another confusing aspect of the gameplay is the “messages” that pop up as giant 3D holograms throughout the world. You can read these messages but once again they don’t make much sense. They seem to be about side missions, but there is no way to access a list of missions and the game doesn’t prompt you to start them. The world, though pretty empty, can sometimes be interesting to look at, especially when in the cityscapes surrounded by what seems to be Russian propaganda. However, for the most part, the graphics come across as cloudy, like someone has literally taken their finger and smudged them. Again, a massive element of the game that suggests it wasn’t ready to be released and made it frustrating to play and enjoy. 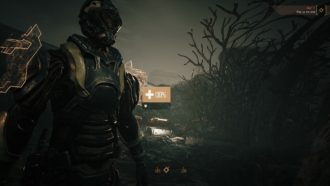 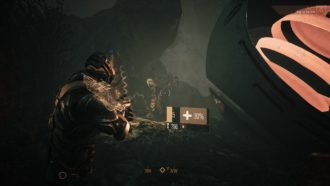 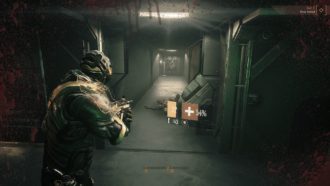 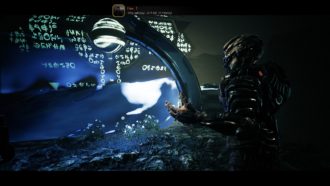 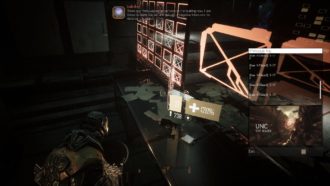 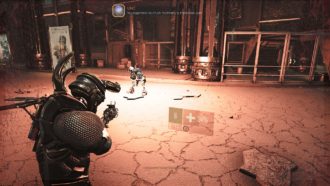 Orange Cast: Sci-Fi Space Action Game feels like a bunch of Beta games have been loosely sewn together and presented as a finished product. One of its biggest drawbacks is the broken English subtitles, which makes the game feel like it was rushed to completion. It may just be the English teacher in me, but if there are that many grammatical errors in one game, it feels as though not enough TLC was put into making the game the best it could be.

If you want a good shoot em’ up in space then stick with the Mass Effect trilogy, or Arkane Studio’s Prey, because Orange Cast is one bland, nonsensical mess that doesn’t contain the elements that every great sci-fi shooter should – excitement, fun gameplay, interesting ideas and memorable characters and narratives.