You’re on your morning train to work, doom-scrolling through Twitter. The door to your carriage opens: a dishevelled, broken person hobbles slowly on board before collapsing. Instantly, dozens of armed soldiers rush onto the train towards you. You pull out your gun and start running, bullets flying. This is Speed Limit, and you’d better be fast.

Speed Limit plays like an extended chase sequence in an action movie – think the parkour scene in Casino Royale, or pretty much anything from the Terminator franchise. You begin on a train, running between carriages and dodging grenades, bullets, and knives launched your way and shooting anything that moves. Next, you’ll climb onto the train’s roof and outrun a helicopter, before jumping into a moving car and roaring down the freeway. Each level is seamlessly connected to its previous one – no loading screens or gaps in gameplay to disrupt the pace. Once you’ve selected New Game, you’re running full-pelt to the end. There’s even an unkillable wall of enemies chasing you down that encourages you to keep dashing forward or face certain death.

The variety of enemy types in Speed Limit keeps things bombastic and fun, with a sense that the enemies could have all been designed by teenage boys in the 90s. In the run-and-gun sequences, there are commandos with guns, knife-wielding impostors, and a dude with a bazooka that looks suspiciously like actor-come-meme Chuck Norris. While driving, you’re swarmed by motorcyclists, ramming Mafiosi, and a giant Mad Max-style truck with a big spike on its front. You get to take down a helicopter from your motorbike before jumping into it and out-manoeuvring jets and missiles. It’s chaotic, frantic, and hella fun. While not every level maintains the same amount of variety and explosive charm, there are definitely more hits than misses.

Presentation-wise, Speed Limit takes the faceless pixel-art models of early adventure games and twists them through a variety of creative filters. There’s a heap of beautiful designs going on in so many nostalgic ways – the colour palette shifting with each level, the modern lighting effects splashed over two-dimensional sprites, the layers of parallax scrolling. There are even sections that appear to simulate the SNES Mode 7 aesthetics from early 3D console titles, and the effect is breathtaking – even as you speed through the game’s stages, you appreciate the variety in visual design. Clever use of letterboxing also gives the entire experience a cinematic feel. The audio is similar in its vintage flair, pairing bullet noises and enemy death groans with a high-octane action thrash metal soundtrack.

There was once a clear generational divide between classic arcade games and modern games when it comes to motivations for completion: where the former has players aiming for the highest score or fastest time, the latter will measure a game as “beaten” when the player has finished the main campaign. This divide is now largely blurred in the age of the speedrun, with players applying external scoring measurements to plot-driven games, and modern arcade titles featuring campaigns to complete. Speed Limit treads that beautifully indie line between the two schools of thought. While presented as a classic, high-score-driven arcade title, its short campaign provides just enough narrative structure to give players a satisfying experience without shooting for perfection. You could spend hours competing for faster times and hunting for achievements, or you could smash through the campaign in a single sitting and set it aside. Either way, it’ll be a blast.

Classic arcade games were renowned for being notoriously difficult so that players would keep spending their hard-earned coins to try again and again. Speed Limit’s difficulty is faithful to its arcade roots but provides some very welcome modern quality of life adjustments. Checkpoints are positioned with precision throughout each level, maintaining the challenge while ensuring that you won’t be slogging through the same section after each of your many deaths. Death is also painless, with a quick rewind to the previous checkpoint. There’s also a generous “easy” mode that reduces the amount of enemies and changes some of their behaviour – however, using this mode prevents you from unlocking many of the game’s achievements, as well as accessing the game’s actual ending. Beating the final boss on easy mode leaves you with a rather patronising “The End?” banner before the credits roll, which I feel misses the point of providing an accessible difficulty option in the first place. It’s not nearly as bad as the DOOM franchise’s toxic gamer-culture “only babies play easy” attitude, but it did rub me the wrong way as someone who appreciates accessibility options. 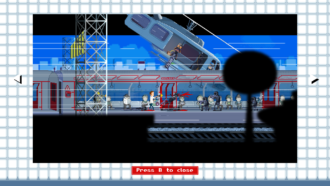 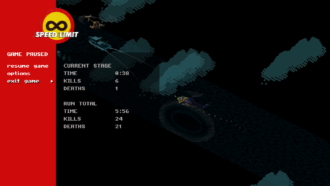 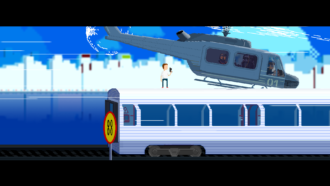 Speed Limit isn’t a long game by any measure. With ten levels (plus the aforementioned “real” final level) that go by in the blink of an eye, an exceptionally skilled player could theoretically finish the game in less than half an hour. It does what it needs to do and doesn’t linger, which is perfect for such a fast-paced experience. In this sense, it reminds me of something like the playable visual album Sayonara Wild Hearts: a short, theatrical romp that never outstays its welcome. Speed Limit provides a great time for a very reasonable price, and is a stellar example of how to bring modern design conventions to classic arcade gameplay.

An incredibly exhilarating and playful experience, Speed Limit is a love letter to the action-packed blockbusters of decades past. It blasts you through its quick campaign at lightning speed and will leave you with your heart pounding, your palms soaked, and a massive cheeky smile across your face. Though it could be a bit kinder to players unfamiliar with arcade-style difficulty and some of its levels aren’t as bombastic as others, Speed Limit is still a sweet and short neo-retro explosion of fun. Fans of the arcade-era and folks looking for something fast-paced and unique will find a lot to love here.