Sword of the Necromancer Review – Undeath becomes her

“What would you do to bring back someone you love?” is the tagline of Grimorio of Games’ rogue-lite dungeon crawler Sword of the Necromancer, and spoiler alert: the answer is “learn necromancy”. With the unique ability to turn enemies into pals via a little occultism and the strong motivation to un-dead-ify someone very close to you, you’re sent into the necromancer’s lair with an enchanted blade and a vendetta.

The forbidden powers of the titular Sword of the Necromancer are the focal point of the game’s premise. Tama, the protagonist, has travelled to the necromancer’s dungeon in the hope of reviving her companion. She was employed as a bodyguard by the gentle priestess Koko, but failed to protect her along their journey and is now attempting to bring her back from the dead. Retrieving the accursed blade, Tama finds its powers useless at healing Koko, until a demonic voice taunts her from within the dungeon and dares her to enter and defeat the necromancer within: only then will the sword be truly powerful.

Thus follows a pretty standard hack’n’slash rogue-like RPG. Players enter the procedurally-generated dungeon and fight monsters on each floor, search for the key to the boss room, and then proceed to the next floor once the boss is dead. Progress is mostly reset upon death: you lose all of your items, half of your levels, and must restart from the first floor. All par for the course for a rogue-like.

Update: We’ve been told the game has since been patched with a new option that allows the character to respawn from the last dungeon rather than from the beginning of the game, making things a bit easier for those struggling!

However, the game’s main gimmick adds a twist to the regular monster-slaying formula. The Sword of the Necromancer allows the player to revive defeated enemies along the way and make them fight for you. That slime you hacked to death? Now it’s your pal. Archers giving you trouble? Unleash a skeleton warrior on them. It’s an intriguing concept and one that adds some much-needed depth to the moment-to-moment combat. The weapons you find are mostly weak (barring a few overpowered rarities) and so you’ll be relying on your monstrous allies to dish out the damage.

Unfortunately the interesting premise of Sword of the Necromancer is let down by its execution. Would-be small issues become compounded in their abundance, starting with its presentation: it’s super low-res. At first I thought something was wrong with my PC since the text is really blurry and the gorgeous artwork in the cutscenes is full of jagged edges, but it seems like a stylistic choice to keep consistency with the pixel-art style of the main gameplay. The unfortunate effect of this choice is an overall lack of polish in its presentation. This is also the case with the voice-acting, which is enthusiastically performed but poorly recorded. I’m not sure if the developers accidentally included compressed assets designed for Nintendo Switch in their PC release.

This makes engaging in the game’s collectible content a little unappetizing, since much of the extra lore tidbits scattered around the dungeon require you to read chunks of blurry text. I did however enjoy looking back on the various monsters I encountered and recruited, as well as collecting (if not using) the wide variety of weapon types.

The monster-taming mechanic is a cool piece of design enhanced by the wide variety of enemy types. Different enemies have elemental types and weaknesses to exploit. Sometimes you’re fleeing from a horde of skeletons that refuse to die, and other times you’ll be spamming the summon button to shoot lasers with your giant magical one-eyed bat.

Combat with Tama, however, is where things fall apart a bit. Your available options at any given time include using an item, weapon, or monster, or pressing a shoulder button to dash. The dash is… unsatisfying. It costs a point of “soul” (stamina) to execute, doesn’t always provide invulnerability, and feels like it lasts a few frames too many to be as useful as it should be. I took a lot of damage trying to wield this awkward manoeuevre. It’s probably not fair to compare games against such a lauded title as Supergiant’s Hades, but I couldn’t help pining for Zagreus’ speedy dash while playing Sword of the Necromancer.

A choice was made to map all items, including summonable monsters and consumables, to the four face buttons (ie. A, B, X, and Y on an Xbox controller). This means that you can only ever carry three things at once when you account for the Sword of the Necromancer. While the intention behind this seems to be a “restrictions create freedom” kind of deal, it makes actually interacting with the world of the game an incredibly narrow dive. Since you can’t drop the titular sword, it feels like a waste to have a second weapon taking up a precious slot that could go towards a destructive monster, a protective shield, or a healing potion. This means I rarely experimented with anything except for the magic zombie sword. Weapons do barely any damage unless upgraded and monsters level up with constant use, making switching up blade combat even less desirable.

Update: We’ve been told the game has since been patched to equip 8 items instead of 4, giving players more freedom in their choices.

Speaking of upgrades, there’s a forging mechanic, but it’s so unbelievably inconvenient that I barely engaged with it. You can store items in special chests that appear around the dungeon, which makes them available between runs at your home base. You can also gather materials by smashing pots and crates in the dungeon. Then, at the base, you can apply effects to your items at the forge. However, the effects are so minor and so costly that none of this seems remotely worth your time: especially since your pet monsters will do much more damage than you once they’ve levelled up a bit. 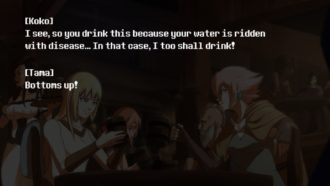 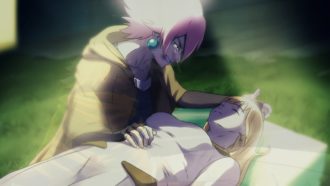 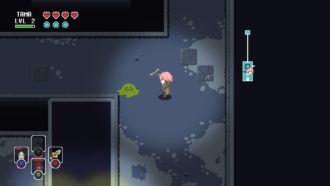 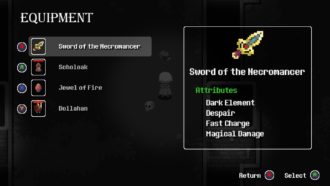 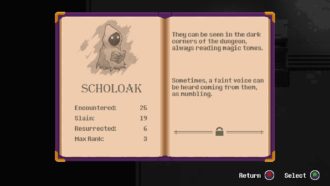 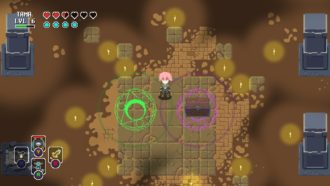 It’s worth noting that there’s an option for two player co-op which is neat, although the second player doesn’t get access to the Sword of the Necromancer so their enjoyment of the game is severely limited. My co-op buddy was not super impressed that he couldn’t run around collecting slimes like me. Still, it’s something, and it does make dungeon-delving a little less lonely. I should also note that you can spawn items, weapons, and monsters into the game via a kind of QR-style code system. The developers have posted some of these on their Twitter and Discord, and they can either help out or add some difficulty to your quest. It’s a nice touch, as is the game’s classic (and wonderfully detailed) PDF manual.

Regarding the story in Sword of the Necromancer, I was initially underwhelmed. Tama, the game’s protagonist, begins the game with an incredibly impassioned monologue about rescuing Koko from death – the melodramatic voice-acting coupled with cringey writing and bad recording quality turned me off right away, and I figured I would just skip through future cutscenes quickly and focus on the gameplay. But then it got gay.

Yes, the main relationship in Sword of the Necromancer is queer, and burns with the passion of a teenage fanfiction writer shipping their OCs circa Tumblr 2009. I honestly wasn’t expecting much after the first scene, but as Tama reveals more of her history with Koko via flashbacks, I came to genuinely care about the pair’s relationship. Tama, a former bandit, is initially disdainful of priestess Koko’s piety and gentleness, but as you progress further through the story you see them becoming closer in each flashback. Their romance is riddled with clichés and I loved every minute. Although the dialogue is verbose and the sound quality gets grating, these little scenes provide a nice layer of context for the player’s otherwise generic dungeon crawl, and help flesh out the world of the game. I’m also a huge sucker for queer romance in games – more gays, please.

As much as I wanted to love Sword of the Necromancer (particularly after getting further into the story) it’s held back by so many annoyances that I didn’t have an amazing time playing through it. There are definitely some cool ideas, and the enemy design in particular is excellent, but issues with its core gameplay keep it from being the fun little experience I was hoping for. Since release, developers have been responding to community feedback and have already patched in various features requested by fans – hopefully this means it will become a bit of a hidden gem given some time.

Sword of the Necromancer is certainly no Hades, but it does stand out in the “dungeon-crawling rogue-lite” genre via its novel monster summoning system. Without this mechanic (or when you’re unlucky enough to be Player Two) you’d be left with a pretty standard hack’n’slash experience that never quite comes together. Between awkward inventory management, frustrating controls, and an overall level of polish that comes under-par, Sword of the Necromancer ends up leaning heavily on its summoning gimmick to stay enjoyable. Thankfully, launching an army of max-level Impchors at a boss is pretty entertaining if you’re willing to put in the work to get there.