Werewolves have never really received the same love and attention as other creatures of the night. Often they’re featured as side characters to their fair-skinned vampire kin. But being a werewolf must also be exciting and fun, right? Mix in a bit of lore about Caerns and spiritual energy and you may just have the recipe for an interesting mythos in which to set your werewolf action game.

Werewolf: The Apocalypse – Earthblood is a video game adaptation of an extremely popular tabletop game, although you wouldn’t have guessed as much after playing through the game’s opening few hours. Exposition and flat dialogue plague what should have been an interesting setting for the merging of fantasy and modern-day struggles such as climate change. However, what is presented is a fairly cliche story about rebellion, with villainous characters whose motivations are paper-thin or nonexistent.

Werewolf: The Apocalypse – Earthblood is an action game, and so even with a rather dull narrative, the game can still make up for it with exciting combat/stealth gameplay. Sadly, these aspects also pale in comparison to other titles in the genre and fail to deliver on the fantasy of being a hulking werewolf that can ravage enemies on the battlefield. While limited in terms of options, the stealth elements of this game actually proved to be the more rewarding style of play and were the primary way I dealt with most encounters. But again, the actual stealth gameplay was fairly light and didn’t add much challenge aside from automatic fail states upon detection in a few missions.

You assume the role of Cahal, a warrior of Gaia and a member of the Fianna tribe. Cahal is a Garou, a person who has the ability to shapeshift into various wolf forms. The main form being the Crinos form, which is by far the most devastating. Already there is quite a lot of verbiage to process and understand, and I haven’t even scratched the surface of what makes up this world’s mythology.

This universe is based on the World of Darkness tabletop universe; which is the same universe the popular Vampire: The Masquerade series of games are based on. While those games are praised for both their world-building and characters, Werewolf lacks all the elements that made those ancillary games so popular. While the initial premise is intriguing, the ongoing struggle turns into an assortment of cliches that is even further held back by weak writing and a poor graphical presentation for the type of experience Cyanide is aiming for.

As somebody unfamiliar with the universe, Werewolf’s world felt extremely surface level and didn’t leverage any emotional connection to the overarching plot to get me invested in any of the characters or their struggle. It’s a real shame as there are moments that have the potential to really set the tone of the game, but are instantly undercut the more time you spend playing as you begin to notice the cracks in the overall facade. 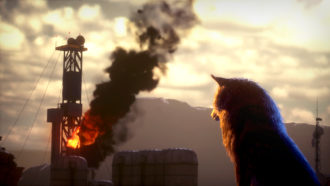 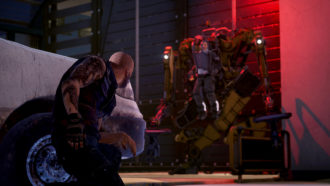 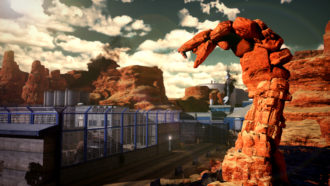 The action combat and stealth gameplay are all seemingly half-baked and rarely reach their fullest potential. Controls have that slight jank to them, that can sometimes get in the way of play. When it comes to combat, dodging is more likely to hurt you rather than save you. Enemies seem to shrug off most attacks and will continue to shoot at you whilst attacking, which will occasionally stun lock you. Stealth on the other hand is almost too easy. Guard detection is hard to determine due to there not being enough signposting of a guard’s awareness state. The guard’s on-screen symbols are rather small and when not looking directly at them, tend to disappear within the user interface. The lack of any real audio cues of rising awareness also means you’ll be detected a lot accidentally in the early stages of the game. Once you become accustomed however, the game is easy to exploit and I was almost able to speed run my way through most stealth sections.

I think the main issue that really damages the overall experience of Werewolf: The Apocolypse is the game’s scope. Much like films that only really come together in the final edit, Werewolf could have potentially cut some aspects of its design as well as reign in their aspirations for the overall graphical presentation. I think the action combat could have benefitted tremendously from having more time and polish dedicated to really making the combat feel satisfying and feel more responsive during those key boss fights in particular. While the stealth elements and pseudo side mission/sandbox areas added some variety, neither were strong enough on their own to make for a compelling addition to the core gameplay loop.

Werewolf: The Apocalypse – Earthblood seemingly tries to bite off more than it can chew. As cheesy as that sentence sounds, it certainly meets that description. There are moments that stand out amongst the mediocrity of it all, that elevate the overall experience, but it’s not enough to justify playing it solely for those moments. The main “selling point” for the game being the ultra-violent combat could actually be its weakest element. So much so that the added inclusion of stealth mechanics is preferable to the main attraction. And it’s this secondary gameplay loop that is left feeling shallow and easily manipulated because of this split focus. Within the stealth systems, there is the potential of something interesting when mixed together with in-universe powers, but the current execution failed to capture the full fantasy.

Had the team been given a bigger budget with perhaps more experienced staff within the genre, there lies the potential for something interesting and different enough to set itself apart from its contemporaries. But the knock-on effect of subpar character models, flat voice acting, clinical scriptwriting, and a forgetful narrative all combine into a package that leaves you feeling supremely disappointed. At some stage during development, there was a condensed more narrowly focused experience that had the potential to excel within its budgetary limitations. Unfortunately, this game fails to pick the right battles and ends up losing the war.