Right from the get-go, Lust from Beyond doesn’t pull any punches. You start the game by ripping a Lovecraftian alien spawn from a monstrous, graphically detailed womb, and soon offer that very offspring up to fellow cult members for a ritual. Before long, blood is consumed and the room erupts into a messy, sweaty orgy with little left to the imagination. It’s clear the game is marketing itself as a sexually liberal and horrific affair. Though, only in an edgy way that is never explored all that well. Finishing my time with the game, the biggest thing it needs is a lot more subtlety. Actually, frankly, the biggest thing it needs is to never be released at all.

*Lust From Beyond is an incredibly explicit game, pretty much all for worse. Reader discretion is advised from here onwards.*

Tripping and stumbling into a sex cult hell

In-game, players take the control of Victor Holloway, an antiquarian that suffers from sex addiction and sees visions of another world that’s Lovecraftian in nature. This other world? It’s plagued with deeply lecherous imagery, be it phallic alien flora or cave openings zealously detailed to resemble vaginas. It seems old Victor has more baggage than the deleted web browser history and sexual paraphernalia he hides in cupboard drawers. Also, he rapes his girlfriend in an early scene of the game. Yep. That’s a scene that happens and is barely touched on.

Wanting to understand the root of both these visions and his being a nasty, unworthy partner to his girlfriend Lily, he takes her advice and seeks out a sexual therapist in the distant town of Bleakmoor for help. Following this comes a narrative full of mixed messages, needlessly over brutalised themes and uninspiring twists and turns. Lust from Beyond is very NSFW and quite the hot mess.

As you can predict, the not-so-subtly named town of Bleakmoor only brings trouble. Finding himself ripped between two sex cults that argue they’re more justified than the other (I’ll fill you in, they both suck, one’s just less violent), Victor has quite the dilemma on his hands. He’s soon revealed to be something called “The Seeing One,” an individual able to reach this other world, called Lusst’ghaa, via sexual climax. Often this comes in the form of poorly designed QTE moments during sex scenes that leave nothing to the imagination – full penetrative sex is shown in all its ugly, clunky glory. Other times, you’re brought to this Lovecraftian world against your will. As in, you’re sexually assaulted – twice within a 20-minute increment, and more times throughout. Despite evidently being used to shock the player, it’s barely addressed in-game, likely because you’re a male character. This serves as an equally bad evil to the tired trope of rape and abuse of women as a means to overcome. Don’t worry though! There’s still plenty of depictions of abuse against women to be disappointed and grossed out by.

Before I continue I want to preface that I’m far from prudent. I advocate for sex exploration in games quite avidly. The caveat is it has to be done well, in taste and it better damn well serve a purpose. Honest tellings of sex has been achieved before in games. Life is Strange 2 in particular has quite the honest approach to intimacy when a young male character loses their virginity. This is an example of sex being explored well in video games. Lust From Beyond on the other hand never knows what it wants to do with its depiction. It’s too busy throwing countless severed naked bodies (almost always cis female ones) at you, or sexual violence at you while hammering down on you “be offended. Be offended. Be offended.” It doesn’t matter that the game alternatively offers a censored version that pixelates these images, they’re still there and uninteresting, never shocking in a unique way. The game never has anything of substance to say.

In another world, this is a horror game that could’ve had more tact. Quite easily a story could’ve been told that plays on the guilt and temptation of the protagonist à la Silent Hill. Sex can be very alluring, and the game would’ve done well with showing this through temptation towards a more ‘sexually liberal’ life. Turns could’ve been taken throughout this hypothetical narrative that maybe show the downsides or dangers that can come from this. Instead, Lust From Beyond confuses players in its attempt to both shock players with horrific sex acts and also throw QTE sex scenes your way mid-orgy to glamorise the very fact these moments exist in the game.

Lust From Beyond is never all that alluring

In the moments when the game isn’t trying to offend (or entice?) you, it’s inviting you into a world that is never all that exciting to bear witness to or explore. Developer Movie Games Lunarium clearly wear their love of Lovecraft on their shoulders. The environment of the otherworldly Lusst’ghaa could be wondrous and eery to explore, but it’s too busy inserting cheap jump scares, or their ninth or tenth crude cave opening, or some other imagery that is trying to convince you so hard of its edge. This leaves the player with a lack of investment in all of the world Lust From Beyond has to offer. When it does take the time to slow down the pace for exposition on the cults’ history and what it means, it’s hard to take seriously and engage with it when the game was, just minutes ago, insistent on showing you some plants that looked like dicks. I mean, come on.

“The game never has anything of substance to say.”

Largely, running through the game’s six-hour runtime can similarly feel like a slog. In Lusst’ghaa you’re able to use powers that largely boil down to telekinetically powering bridges and paths over cliffs and gaps. Maybe you’ll occasionally get the variation of powering pillars to guide a creature to help gain passage in another way. That’s about the gist of the puzzles in this game – quite lacklustre. Other inspirations are clearly drawn from the Amnesia series. Players have a sanity meter that can be managed by tonics and stealth is often encouraged, though it doesn’t go as extensive as it needs to. There’s no peering through doors or around corners, just blind faith you can make it through on crouch walking alone. If you don’t, fleeing on foot isn’t easy and slow as hell. 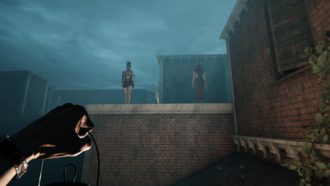 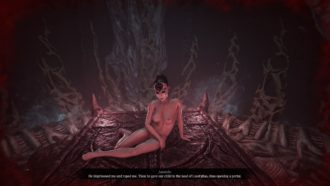 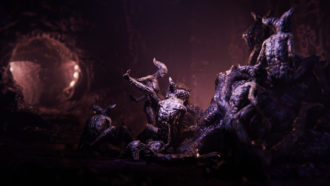 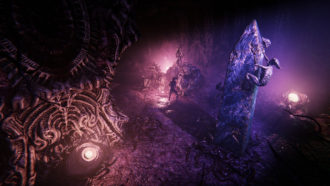 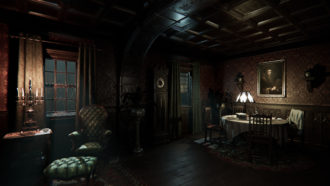 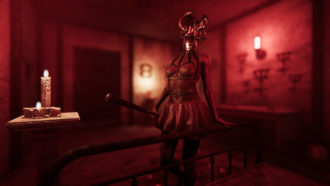 The latter half of the game also brings combat encounters that feel like a watered-down version of a recent Resident Evil FPS game. Gunplay is clunky and you’ll find yourself in late boss battles that feel very much like they’re from the early 2000s. What this can be summed up with is that Lust From Beyond tries to take and borrow from a lot of beloved franchises, though it’ll come off with a more master of none effect.

With the dust settled, Lust From Beyond feels like a cautionary tale to the darker side of storytelling. This is a game that bafflingly currently has a ‘Very Positive’ rating on Steam. It’s unabashedly more on the side of a sex sim game with a horror story in-between which seemingly is something wanted. Trawling through the feedback I’m exposed to a corner of the internet that the game actively accommodated towards.

With the guise of a game releasing as uncensored and unabashed in its sexually violent imagery, it’s celebrated. Make no mistake, it shouldn’t be. Just because a large section of the games industry isn’t going to specific grounds, doesn’t mean it needs to in less traditional titles. I’m not even offended with Lust From Beyond (something that may very well be thrown at anyone with remotely any criticism of the game). I’m tired. Games are better than this. People should be better than this. This game should never have seen the light of day.

I never enjoy flacking on an indie game that clearly had so much work put behind it. Still, so much time was put into areas that shouldn’t have been focused on at all. Lust From Beyond is a terrible game with weak ideas so juvenile they’re laughable and exhausting. This is a game that will entice quite a vocal minority of gamers but nevertheless a minority that shouldn’t be given the time of day.

If you’re sensible, please, for the love of God spend your time and money on literally anything else. Lust From Beyond will derive no joy, only misery and lethargy.