Maquette may not have been the best choice for me to review. I mean, you wouldn’t expect a person whose dog just ran away to review a dog walking simulator, would you? So really, this gal who’s suffering a recent broken heart probably shouldn’t be playing a romantic narrative puzzle game. At the moment, I can’t even listen to music because nearly every single song is about romance. So yeah, deep diving into this game which is also voiced by real life Hollywood couple Bryce Dallas Howard (Jurassic World/The Help) and Seth Gabel (Fringe/Dirty, Sexy Money) probably wasn’t the best choice.

However, during its opening cutscene, I realised that the game’s narrative is about Michael, the narrator, looking back on a relationship. Memories of his romantic endeavours with a girl named Kenzie come back when he finds the sketchbook they used to both draw in. This video game that breaks down a past relationship using the aid of puzzle mechanics was either going to make me ugly cry or give me closure. The best I could hope for was to experience a mixture of the two.

The opening scenes introduce players to the brilliance of the Maquette soundtrack with an ode to the setting of the game with Gabor Szabo’s cover of the Animal’s song San Franciscan Nights. It sets the mood as Michael begins reminiscing about his relationship with Kenzie when he finds “forgotten objects from our time together… A jumbled timeline.” The narrative in the game comes in two forms – one is in Michael’s inner thoughts that are shown in white font. These usually appear as signposts that tell you you’re on the right track or when you’ve cleared a particularly difficult puzzle. There are also voiceovers, which gave me more of an idea of Michael and Kenzie’s personalities due to the inflections and tone of their speech.

However, to uncover the full story of Michael and Kenzie, you need to earn it and that’s where the puzzles come in. The idea of the ‘maquette’ is introduced pretty much straight away. A maquette (and yeah, I had to look this up) is a small scale model made of a structure or object that will become much bigger when it is finished, like an architectural model. In Maquette, there are three models in play. The first is the teeny tiny model that you, in first person, can play with like an elaborate dollhouse. The second maquette’s size is true to life and the final maquette is huge, dwarfing the player and making it a challenge to traverse and move objects about.

There is always a movable object in the world that is part of the next puzzle or series of puzzle solutions. For example, a key may open a door in the life-sized maquette, or it can be used to bridge a gap in the tiny maquette. The kicker here is that everything you place in one model appears in the other models, scaled up to the appropriate size. So suddenly that tiny key bridge creates a bridge in the regular world that allows the player to reach a house where Kenzie and Michael experienced their first house party together. A captivating audio function is when you drop a tiny object in the small maquette and hear the thud of the larger replica slam behind you and echo through the other two maquettes. It’s a mighty satisfying sound to experience.

Maquette isn’t an easy puzzle game. It will leave you scratching your head some of the time, but it also keeps things fresh. It changes up the puzzles so one minute you’re fitting together tiny bridges, the next you’re proportionally miniscule and having to navigate through a massive landscape or figuring out how to juggle crystals through the doorways that correspond with their colour. The experience was in no way boring as there was always something to keep my brain active and switched on, something that’s often a struggle for me after a full day of teaching teenagers. 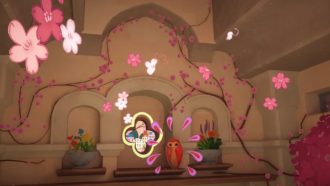 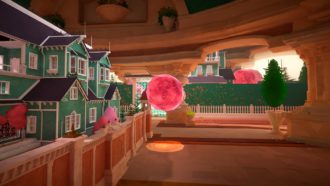 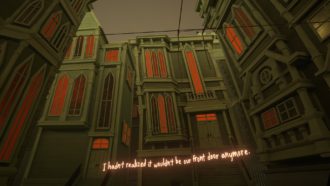 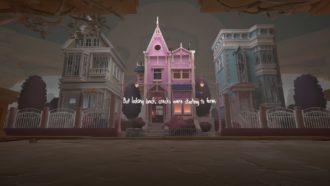 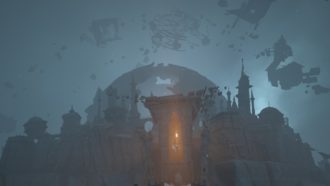 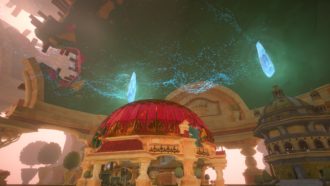 Though it was super fun to play around with all these different sized objects, what wasn’t fun was how finicky the game mechanics were. I spent about five minutes trying to position a block just right and getting frustrated that it seemed to be magnetised to a certain unwanted position. Also at some points I found myself unable to walk up certain objects that I had put in place to scale larger structures. Using methods such as jumping and moving forward would occasionally get me stuck on the terrain and unable to move, forcing me to reload the game. These moments were rare, and though annoying, they did not take away from my overall enjoyment of the game.

Though the puzzles kept me entertained, the narrative, unfortunately, did not. Playing this game heartbroken needn’t have worried me, as the character development of Kenzie and Michael was not enough for me to feel too attached. I wanted to know more about what made these characters tick and why I should be sad when they started having troubles… instead I was just confused to what their troubles actually were. The story side of this game is way too vague for me to have gotten triggered by anything within its narrative.

“Playing this game heartbroken needn’t have worried me, as the character development of Kenzie and Michael was not enough for me to feel too attached.”

I also feel as if the puzzles themselves should have been more symbolic of what was actually occurring in the narrative. There were lovely moments, such as Kenzie showing Michael a special spot she has never shown anyone else and the player gets to experience this space for themselves. However, a lot of the puzzles just seemed to be… puzzles. They didn’t really connect with the love, or heartbreak, or grief that Michael was telling us he was experiencing. It seemed as if the puzzle elements and the narrative elements were too separate entities most of the time.

A lot of it was also very surface level relationship stuff and was a story that has been told a thousand times before. There is a song in the game that’s lyrics contain the words “I’ll wipe your blood off the concrete” – that is what I was hoping for, a raw, heart-breaking romance that would put my personal story of heartbreak to shame. It was disappointing that the devs didn’t delve deeper when other games such as What Remains of Edith Finch dared to take the plunge into “uncomfortable” territory and use their puzzle mechanics to go hand in hand with the narrative. If only Maquette had done the same, using its puzzles not just to entertain but also to provide a symbolic element to its narrative, it would have been beautiful on a much deeper level.

Maquette is a beautiful puzzle game with a catchy soundtrack that really sets the chill yet heart-breaking vibe of the game. The way it messes around with space and depth keeps things fresh throughout and the game looks damn fine, making it an overall positive experience. However, it had an opportunity to make much stronger links between its puzzle world and its narrative world and it saddens me that this didn’t occur. Using the puzzles to create stronger symbols of what was occurring within the relationship would have been a powerful way to communicate the emotions that Michael was feeling within the game. Though the game did do this to some degree, I found it could have really provided an extra layer of narrative analysis by connecting stronger ties between puzzle and story. This heartbroken gal didn’t end up shedding one tear. Or maybe I’m just not as heartbroken as I thought I was…