Neurodeck Review – An interesting premise in need of more depth

Neurodeck is a deckbuilding card game developed TavroxGames and published by Goblinz Publishing. It sees you playing as a patient trying to defeat their phobias through treatment.

The first thing that drew me to Neurodeck was its amazing art. Colourful, mysterious, and beautifully rendered, the screenshots of the game’s interface immediately piqued my interest. Everything from the art on the cards to the depiction of enemies looked gorgeous and incredibly detailed.

On the surface, the premise of Neurodeck sounds fascinating too; I found the idea of bringing themes of mental health to a card game original and, if done well, I thought it could create a powerful gaming experience. When I got stuck into the game, however, I quickly became disillusioned. The writing in the game was clunky across the board, and the game’s story felt more like an afterthought than anything else. You play as a woman named Lei, although you don’t get much insight into her back story as a character, who she is, or why she is seeking treatment. Instead, the game is peppered with strange diary entries that contain a multitude of grammatical errors and very little character development. I found this especially troublesome since the game tries to tackle the incredibly layered topic of mental health, but instead has a story that seems to gloss over the complexities of it, making it feel like a thin veneer for the card game mechanics.

When it comes to gameplay, Neurodeck takes cues from titles like Slay the Spire, Ring of Pain, and Banner of Ruin. Like Slay the Spire, a playthrough is made up of a number of encounters: some battles, some events where you can add, unlock or remove cards from your deck, and others where you can upgrade your permanent character stats. In battle, you get three actions each turn and there are two main stats to keep your eye on: sanity and stamina. Stamina functions like mana, allowing you to play cards in exchange for a certain amount of stamina, and sanity represents your health. When you have no stamina left, the phobia wins, and you lose the game. Apart from stamina and sanity, Neurodeck also allows players to equip items that can grant the player certain modifiers during a battle. Rested, for example, will restore a small amount of stamina and sanity at the start of your turn, and wrath will increase a player’s damage. Both equipping and using items and playing cards will cost you one action, which means you’ll usually play about three cards in a turn. 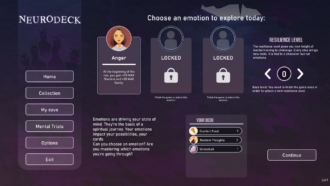 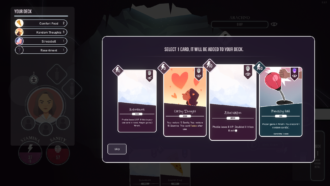 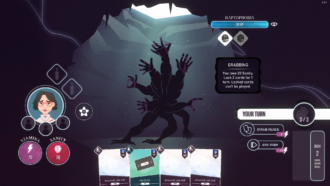 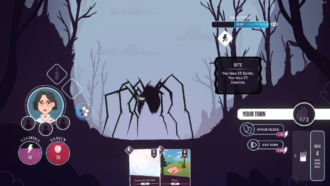 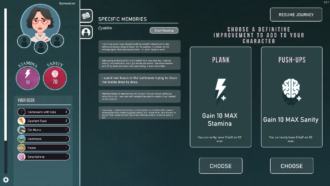 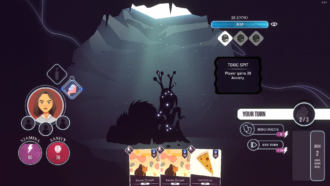 When it comes to enemies, you’ll have to fight monsters that each represent a specific phobia: for blennophobia, for example, you’ll be fighting creepy slugs, while arachnophobia sees you taking on a spider, and agoraphobia will have you battle a crowd of laughing strangers. In total, the game boasts over ten different phobias to face off against, all with different quirks and abilities in battle. While each phobia does behave differently in battle, it quickly became clear to me that a phobia’s behaviour is always the same, turn to turn. While equipping items and collecting more cards can make the gameplay slightly more dynamic, overall it doesn’t match up to the energy of titles like Slay the Spire or Ring of Pain. In addition to this, you’ll often encounter the same phobias multiple times throughout a run, and the encounters outside of battle are also often the same. For me, this took a lot of the spontaneity out of the gaming experience, and I found myself always looking forward to what was next, only to be disappointed again.

“…what was missing in Neurodeck for me was more depth, detail, and sensitivity.”

Overall, what was missing in Neurodeck for me was more depth, detail, and sensitivity. Enemies, card mechanics and story all showed great potential, but the whole game just felt like an Early Access release at best. It failed to address the delicate topic of mental health with any finesse or tact. The use of the term ‘sanity’ feels old fashioned and tone-deaf, and the game makes no real attempt to incorporate the nuances of mental health struggles into its story. As a result, there are many moments in the game that are clumsy and ill-considered.

There are also plenty of bugs, writing with grammatical errors and repetitive areas of gameplay. Neurodeck might keep you entertained for a few hours, but not longer. If the developers decide to persevere and add more content as time wears on, and engage a sensitivity reader, I could see this becoming a worthy entry in the deck-building genre. For now, however, if you want to sink hours and hours into a card game, there are more worthy options.

Neurodeck offers up an interesting premise and beautiful visuals. Story-wise and gameplay-wise, however, the whole experience feels like an Early Access release; many areas of gameplay are repetitive, and it’s easy to encounter the same enemies multiple times in a single run. I’m convinced this could be a stunning game if given a bit more love by the developers, but it doesn’t match up to the giants currently dominating the card-game genre. If you’re looking for a deck-building challenge, it’s best to keep looking a little longer.