The story behind the creation of Shattered – Tale of the Forgotten King was more than enough to get me excited for this action/adventure RPG. The developers, Redlock Studio, are a group of French geeks who met years ago playing Dungeons and Dragons. Their D&D campaign went on for years and inspired many different paths and characters. The team, who would play D&D at a tavern called Redlock, decided to start their own studio and turn their fantasy creations into a video game. The studio was not only inspired by their own imaginations but also “dark fantasy, sci-fi and Lovecraftian horror” with their video game influences spanning from Dark Souls to Journey to Shadow of the Colossus. The team started a Kickstarter back in late 2016 and the game has been in early access since mid-2019. With these genres and video games as influences, plus nearly two thousand people backing them on Kickstarter, Redlock definitely had something to live up to.

The protagonist/playable character of Shattered is The Wanderer, a muted soul who wakes up in the collapsed world of Hypnos unaware of who they are. This world is missing their king, who just happens to be the only one who can tell you who you are and give back your voice. Along the way you meet characters who can help you on your journey and uncover information about the history of the limbo lands you find yourself traversing. One of these characters is The Whisperer, a tiny little skeleton dude that gives off some major Jack Skellington vibes, except he is tiny enough to sit on your shoulder and whisper sweet nothings to you every now and again.

To be honest, I’m not quite sure what the point of The Whisperer is. I also had a similar feeling of confusion with many of the other narrative elements in Shattered – Tale of the Forgotten King. I know that I have to find the king, but any other narrative is quite vague. It seems as if the devs want the player to piece together the mysteries of the world themselves, but the information provided is too cryptic. The cryptic narrative also stretches to item descriptions and a few hours into the game I had a number of items that I didn’t understand what to do with. Some were labelled “saleable” but it wouldn’t let me sell them at the sparse number of vendors I came across. The lack of adequate descriptions may be because devs Redlock Studios are based in France and English isn’t their first language. There is no spoken dialogue, only written, and when The Whisperer speaks to the protagonist, their speech is kind of broken.

To reach the next level, you will have to collect essence fragments that are scattered around the world and evaporate from enemies when you kill them. These essence fragments are hard to come by as the game has a Souls-like game system where once you die you also drop all your accumulated essence fragments. It also has a Souls-like save system which means you have to find and activate the nearest “limbo well” to save your progress. If you die before coming across one of these wells, you’ll be resurrected at the last shrine you activated.

All the enemies you killed will also be brought back from the dead, but if you slaughter the enemy who killed you, all your essence points will once again be yours. To actually level your Wanderer up, however, is a more challenging task than any Souls-like game I’ve played previously. You can’t just do so from your character profile or from a limbo well or easy to access location. You instead need to travel to one particular area of the map and only then, from a certain shrine, can you level up. This is extremely frustrating as it may take you quite a while to backtrack. 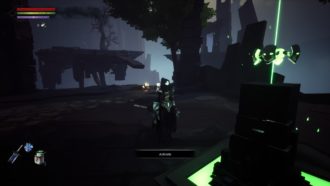 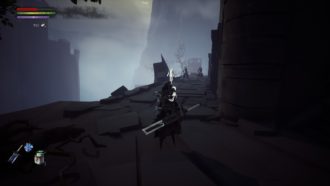 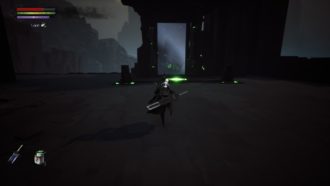 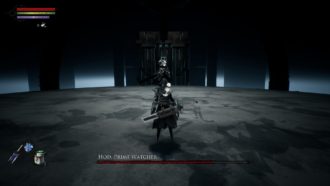 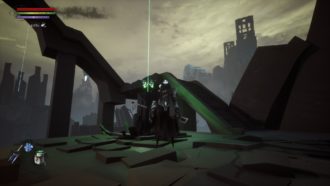 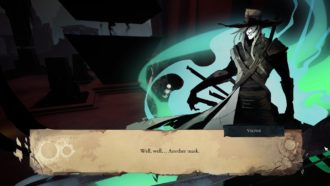 “…the art style of Shattered… tricked me into thinking I was in a safe space… without its mind games I wouldn’t have been as chill about dying as much as I did.”

Though Souls-like games usually make me nervous due to their unforgiving gameplay, the art style of Shattered, along with the peaceful acoustic guitar soundtrack, tricked me into thinking I was in a safe space. Yeah, this game totally messed with my head, but I think without its mind games I wouldn’t have been as chill about dying as much as I did. The world Redlock have created is varied, not only in its level design but also in its playstyle. I actually enjoyed how the game would switch from a 2D to a 3D platformer and how terrain would change from scaling dilapidated buildings to jumping from one fragmented rocky platform to the next. Every twist and turn is intriguing in all its monochrome glory.

Gameplay is a bit clunky but very straightforward. You only have a handful of different controls including normal and heavy strike, roll/drift, pick-up and of course the standard movement and jump controls. You have three status bars to maintain with health, stamina and ether. There is unfortunately not much variety to the enemies you’ll face, although the enemy designs do add to the overall beautiful, eerie nature of the game. Though the game may look like a work of art, there are many things about it that make me think Redlock have released this without adding the finishing brushstrokes.

Shattered – Tale of the Forgotten King has so many things going for it. It looks absolutely stunning with its protagonist filled with jagged edges, its melancholic soundtrack with its twangy acoustic guitars, and the story behind its creation is super sweet and inspiring. However, this is a game that has been in early access for nearly two years. Steam is full of players offering suggestions in their reviews of what needs improving, but a lot of these repeated suggestions have not been taken on. Shattered needed to be worked on a bit more before it was smashed into pieces and served up to its audience.