Story of Seasons: Pioneers of Olive Town is another classic farming sim entry by the original Japanese Harvest Moon developers. After playing Friends of Mineral Town quite recently, I can say that this is definitely a more modern take on the genre with some of the accoutrements that we have become used to post the release of Stardew Valley. It takes a more personalised approach to the way your farm is laid out and has a lot more to do than some of the older Harvest Moon games, so it’s great to see the team branching out. If you’ve already burned your way through Animal Crossing: New Horizons after a full year with the game, or are just looking for something new to try, maybe Story of Seasons will be worth a look!

OUT ON THE TOWN

It didn’t take very long for Story of Seasons: Pioneers of Olive Town to suck me in. For the first few in-game days I felt adrift, like I wasn’t really sure what I was supposed to be doing other than maintaining my small farm. As far as I could tell there wasn’t really an overarching goal that I was working towards until I finally went into the town hall and completed a task for the mayor. I didn’t really understand what this would do until I returned to town the next day and found all the roads upgraded. Aha! This isn’t just a game about farming, it’s a game about city planning and renovation. Perfectly mundane in the softest and most pleasant way imaginable.

From here on out, everything made sense: you work on the farm to improve Olive Town. All of your planting, growing and raising money is all in the goal of making the town a more popular tourist destination, which is a great motivation to keep playing. Who knows in what way you’ll be able to help the town next, or what new task the mayor will give to you. This little addition does an amazing job of making the game feel focussed without taking away from any of the time you spend on the farm.

I do have one complaint though. Olive Town is quite large. When you arrive it’s already bustling with multiple stores, a museum and a beautiful beachfront that by all means should already be summoning tourists in droves. I wish that the town was more dilapidated and small when the player arrives. I wanted to be given so much more to fix. I wanted to start with three miserable shacks and a broken swing set and build my way up to a bustling city. It feels a little like the game starts already halfway done. Animal Crossing: New Horizons is a great example of what I want, beginning in tents on an island inhabited only by you and a scarce number of animals. In that game it really feels like you are instrumental in the creation of your town, not just its upgrade, and I think that is what Pioneers of Olive Town is really missing.

The cast of characters that you can interact with in the town feels almost intimidatingly large, despite not actually having that many more characters than other farming sims. One of the reasons for this is that there aren’t any character portraits. From a distance and with the low detail 3D models, some of the characters can be hard to tell apart, especially ones with similar hair colours and styles. The lack of character portraits also means that there is less emotion visible from the characters during conversation, especially considering the character models don’t emote very well, and outside of cutscenes they’re too far away from the camera to really see. Some portraits to show the character’s expressions would have gone a long way to make each of them feel individual and more complex. With such a large cast, it seems strange that something this commonplace in farming sims was overlooked.

You are going to want to get to know the characters quite intimately. This is because there is the option of settling down and getting married. There are ten romance options to choose from and you’ll win their affection by, of course, talking to them and giving them gifts every single day. All of the candidates are well rounded and diverse, and the player is able to romance whoever they want regardless of gender! I have heard that in the Japanese version of the game, same-sex marriage is referred to as the “best friend ceremony” which is a little unfortunately worded. I myself was wooing someone of the opposite gender, so I can’t state definitively whether this is still the case in the English version or not.

HOME ON THE RANGE

Story of Seasons: Pioneers of Olive Town gets farming right almost immediately. It takes the more modern farming sim approach and allows you to till any empty space on your farm to create your garden plots. A lot of older Harvest Moon games had an assigned area that you could plant in and there wasn’t much room for self-expression, but Pioneers of Olive Town does not fall into that bracket. Being able to choose exactly how your crops are laid out and where they are planted does wonders for personal expression, which is a surprisingly important factor in a farming sim. 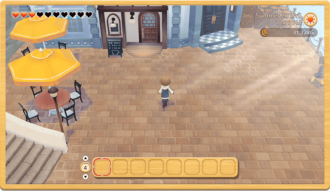 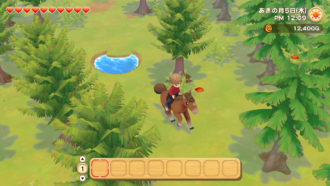 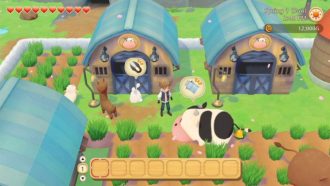 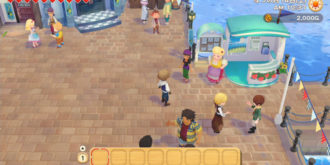 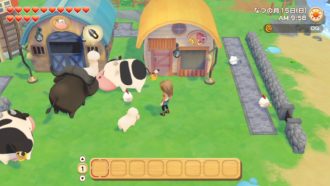 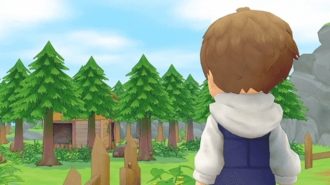 Watering crops does feel a little clunky to start with. You have to be quite delicate with your positioning before you’re able to water anything, but once you get at least the first upgrade and can water up to three plants at once it feels a lot better. The feedback on all of the chargeable tools is amazing and I particularly adore the charge on the axe. A fully charged axe swing lets you chop any trees within a four by four radius which is super satisfying, especially since your farmer does this wild little spin with the axe to hit all the trees at once. The second I got that upgrade I spent the next hour cutting down trees just for fun.

There are also options to plant trees in any untilled ground and to raise farm animals to produce milk or eggs. Before you’re able to do this, you just need to repair the coop and barn already located on the farm with resources that you can collect yourself. The aspect of repairing buildings is really good too. Often you’ll find a broken bridge or something similar that needs to be fixed in order to access a whole new section of farmland. It’s a really cool way to keep the game fresh because there is always a new area with a whole bunch of new resources to discover. What cool stuff could be behind that rubble? It’s up to you to find out!

Of course, it isn’t all perfect. The main problem I have with this latest Story of Seasons release is the use of ‘makers’. Makers are a series of weird, almost vending machine looking devices that are used to process materials. They’re used to create iron bars out of iron ore and the like. In Stardew Valley you would use a furnace for this, and you would use a loom for creating thread from wool. In Pioneers of Olive town, it doesn’t matter what you are crafting, it all comes out of one of these weird makers. They’re ugly and take up so much space on my farm, plus they really take me out of the world. I don’t understand why they all look like they’re made out of plastic. They also need at least one tile in between them from each direction, meaning they are going to take up a lot of real estate wherever you plan on putting them, especially since you’re going to need a lot of them if you want to get any meaningful processing done during a day. It seems like a weird choice to me. It may have been more work to create different objects for each maker, but it would have felt a lot more organic.

Another issue is the game’s load times. Transitioning between any area, indoors to outdoors for instance, brings you to a very long loading screen. I often found myself pulling out my phone and just waiting until it finishes. This has apparently already been addressed with a patch, but I honestly didn’t notice the difference, it was just as slow for me as ever. For the most part, the slow loading times weren’t a big deal, that is unless you’re donating items to the museum. If you thought handing Blathers one fish at a time in week one of Animal Crossing: New Horizons was bad, I have some grim news for you. You donate everything in Pioneers of Olive Town one by one, and after donating you go to a loading screen. Once the loading screen finishes you get to decide where to display your donation, then it takes you into another loading screen to take you back to the game. I said ‘oh no’ out loud the first time it happened. I was shocked at how poorly this was designed in a game made by experienced developers. I still can’t believe they didn’t realise how infuriating this would be.

The art style of the game is really cute. While I am usually a fan of traditional 2D farming sims, the bouncy animations and the way the hair moves does really add a lot to the cute aesthetic of the game. The classic round Harvest Moon cows make an appearance which is great because they are the most adorable thing you will ever see. The colour pallet is soft and calming, almost looking like watercolours in some aspects and it does wonders to make the world feel inviting and zen which is always the goal with a farming sim.

I do have a few issues with the soundtrack though. For the most part it is nice, the music that plays after dark in the town is especially good, but there are a few tracks I would consider almost grating. First is the shop music. It is the same in every shop you go into and it’s a little overbearing with this loud first note that feels like the game is trying to wake me up every time I want to buy some seeds. The song does stop being so jarring after a few loops, but then you’ll leave and enter another store only to have it get you a second time.

The worst offender is the music in the mines. Horrible. Awful. It’s this short, irritating loop of music that you hear the entire time you are searching for minerals in the mines. A task already arduous and boring made even worse when you have to listen to this terrible song the whole time you are down there. I turned my speakers off every single time.

While I do have a few complaints with Story of Seasons: Pioneers of Olive Town, overall I really enjoyed the time that I spent with the game. The actual meat of the gameplay is really satisfying with a lot of more modern gameplay ideas to freshen up the already well-loved franchise. The characters are very sweet and lovely and the cows are so round and adorable.

I will no doubt be coming back to Olive Town in the near future to see what new things there are to discover on my farm.