I have to admit, there was a time in my life when I was put off by games that didn’t have strong narratives. I’m used to always prizing narrative above all else in other mediums such as books and TV shows. It’s not surprising then that a similar mentality would creep into my gaming habits. However, playing games like Clan O’Conall and the Crown of the Stag help remind me that sometimes fun gameplay is more than enough. It especially helps when the game’s gorgeous to look at too!

This 2D platformer initially drew me in with its amazing art design. It reminds me of 90s Cartoon Network shows like Powerpuff Girls and Johnny Bravo, yet with a slight retro 60s vibe. The game’s added Celtic mythology is also super interesting and all the rage at the moment. You just have to look at games like Hades and the Assassin’s Creed series to see that we gamers love a bit of mythology mixed in with our gameplay.

The story takes a backseat in this action-adventure puzzle game where you play as three siblings: Killcanon, Clakshot, and Haggish, all heir to Chief Ardan’s throne. They are on the hunt for Caoranach, the Mother of Demons, who has possessed and kidnapped their father and King. His capture means that the world of Hibernia, the classic Latin name for the island of Ireland, has been thrown into chaos. Only by rescuing their father and the Crown of the Stag will peace once again fall between the mortals and Aos Si, the faerie folk. You traverse around this faerie land and come across foes and many obstacles to overcome for the Crown.

To successfully traverse the land of Hibernia you’ll need lots of mad skills, and that’s where the game’s most entertaining and iconic mechanic comes into play. You can easily switch between the O’Conall clan on the fly, utilising their special skills to solve puzzles and kill baddies. Kilcanon, the beefy swordmaster, was my go-to battle guy. He has quick swordplay and the ability to blade dash through enemies, so he was often the best choice for skirmishes. Clakshot, the female of the group, wields a bow and arrow and is great for shooting down distant or flying enemies. She also can jump super high so she’s great at platforming and getting to hard to reach places. Haggish is the brawn of the group and probably my favourite overall as he seems to have the most personality. His unruly beard and one bulging eye make him look like he’s seen his share of bar fights. However, one of his skills is the ability to “twirl” which acts as a dodge mechanic. Twirling into baddies whilst he literally screams “weeeee!” definitely feels like a “screw you” to gender norms. Not only can this dude twirl like a pro, but he can also smash down blue walls (his character colour) and break the armour of enemies wielding shields. 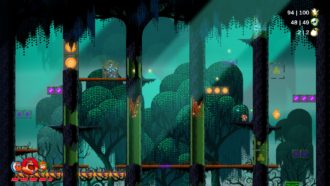 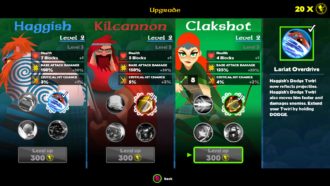 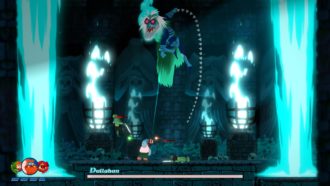 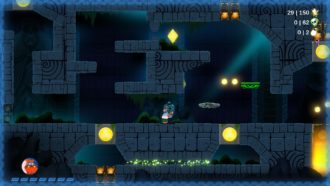 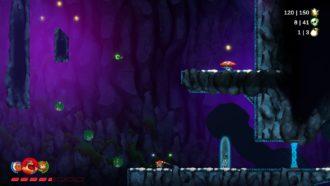 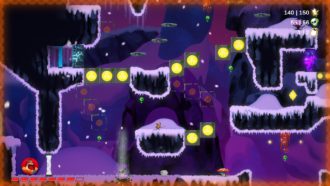 The game is sectioned off into three chapters with a number of levels in each. Each level sees you collecting faeries, which are sparkly golden and tiny. These creatures are sometimes right in front of you and other times in hard to reach places. There is a count on the top right side of the screen that shows how many faeries you have collected compared to how many faeries there are total. There’s a similar count for how many enemies you’ve killed and how many secrets you’ve collected. Secrets are represented by a gremlin looking dude with a knapsack over his shoulder that is always hard to get to. Once you do reach him, however, he disappears and you gain his knapsack, aka his “secret.” After each level, you receive extra faeries for the amount of “secrets” you’ve collected and enemies you’ve killed. These faeries then go towards levelling the three O’Conall’s and also giving them extra skills. These skills include Clakshot being able to double jump and Haggish’s twirl being able to beat away projectiles.

Not only do you earn skills via faeries, but throughout your journey, each of your characters will be “gifted” a new skill by a kind spirit that helps you make your way across new areas of Hibernia. For example, red vines appear and Kilcanon now has the ability to dash n’ slash through them. Due to this new skill, red vines are now introduced to Hibernia’s flora and they become gradually harder to reach, further testing out Kilcanon’s slashing abilities. Sometimes the mechanics, like Clakshot’s ability to grapple onto hooks, can be a bit fiddly. In some parts of the game you need to switch between characters mid-air and pressing Clakshot’s grapple ability didn’t always work. It took a few times to get it right, but once I did, I entered a flow state and was on my merry way.

“…you’ll need lots of mad skills, and that’s where the game’s most entertaining and iconic mechanic comes into play.”

The game keeps things exciting by constantly including new enemies and obstacles that your O’Conalls have to work together to overcome. After a level, you may come across a boss fight, such as Jack-in-Irons who’s based on a Yorkshire myth of a giant covered in chains and the skulls of his enemies. He whips these chains at you throughout your battle; at one point he covers the screen with them and you only have a small pocket of free space to escape his wrath. Also, there is the Twrch Trwyth, a wild enchanted boar that runs right behind you through one level. You have to swap between the O’Conalls and think fast as different enemies and environmental obstacles come at you with the boar still on your tail.

A number of hours into the game a new mechanic is introduced that only lets you play as one character at a time. When you walk through a barrier containing the colour associated with one of the O’Conall’s, it will switch to that character and you will be unable to switch to another unless you find the barrier containing their colour. This barrier can be accessed by using the skills of the particular O’Conall you are stuck as. It’s these kinds of changes throughout the gameplay that keeps the experience fresh and far from boring. It also helps to make this one of my favourite games of 2021 so far.

I didn’t think I’d love Clan O’Conall and the Crown of the Stag as much as I did, but it’s really hard to fault this game. It’s fun, it’s bright, it’s beautiful, it doesn’t take itself too seriously and its constantly changing mechanics keep it from being repetitive. It’s easy to see this game as superficial due to its graphics and light-hearted humour. However, so many of the characters, bosses and environments have been painstakingly researched to make sure it connects with Celtic mythology. All up, playing multiple badass characters as I traversed around a gorgeous, vibrant world was a lot of fun and I highly recommend this action-adventure indie.