NieR is a franchise with an interesting trajectory over the last decade. The original game released in 2010 and interestingly had two versions circling. To appeal more to Western audiences, players controlled a buff, brawny older character in the Gestalt version while Japan controlled a much younger version of the protagonist, Nier. It itself was a spin-off of the series Drakengard and despite a later indirect sequel in the hugely popular NieR Automata, it never saw vast commercial success and has instead been a cult classic of the past eleven years. All these years later and Western audiences are finally getting a taste of the Japanese version of the original game, now titled NieR Replicant ver.1.22474487139….

Getting to play the game this past week ahead of release, two things are abundantly clear. Firstly, it won’t break out of the niche the game has carved for itself over the years. And secondly, this is a game absolutely more for the fans, or at least those into weird as hell RPGs.

Save the girl, make some friends

NieR Replicant ver.1.22474487139… is a game that feels like an epic journey of the truest nature. Players assume the role of titular hero Nier, thrust into a vast fantasy sci-fi world. An illness known as the Black Scrawl has spread across the world he inhabits, eventually even afflicting his younger sister Yonah. Desperate for a cure, you set out across the lands, meeting some companions and many a foe (in the form of ghastly ghostly Shades) along the way.

Where Replicant’s narrative is strongest is in the bonding between friends along with the lore that unravels along the way. Wander around the village that you and Yonah inhabit, and you’ll gather quite the sense of community. Sure, it’s not the most gorgeous of sights (the remastering does its best to update a very early 2010’s environment), but you’ll at least see that everyone in your home village cares for one another. Nier and Yonah were essentially adopted into the village, gathering friendships within the city including its prominent twins, Devola and Popola. You can even get insights into how regarded you are just in the interactions you have with the town’s NPCs as you take up odd jobs. It’s charming and warming to see.

Though none of that compares to its charming cast of main support characters. In NieR Replicant you’ll meet and be guided by Grimoire Weiss, a literal companion in the form of a magical floating book that helps you cast spells. They’re deadpanned and sport a very British, regal voice. Then there’s Kainé, a crude talking and lewdly dressed character voiced by the ever-talented Laura Bailey. I cannot begin to tell you how delightful it is hearing expletive after expletive come out of that character’s mouth. It makes for fun respites from the very serious anime storyline the game has going for it. Adoration can also be shared for your younger sister as well as the living weapon that is Emil, a young boy able to cast foes to stone with his eyes. Simply put, there’s a lot of white-haired anime characters in this game. I’m charmed by them all and want to protect them. 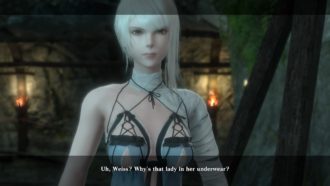 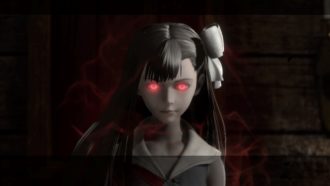 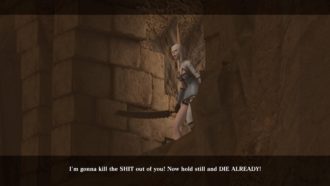 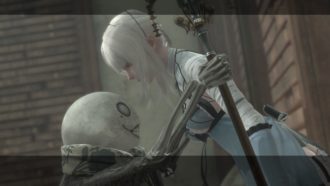 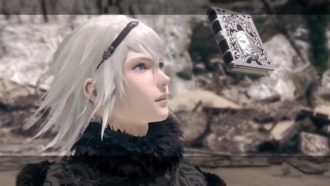 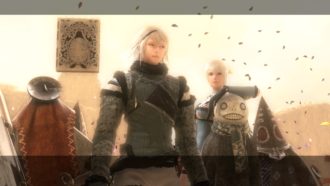 NieR Replicant is a wickedly detailed game, often for better or worse. Long time fans will be pleased to know the game has multiple provided playthroughs on offer. Each subsequent playthrough kicks off from the original second half and will net you a different ending along with some new tidbits along the way. Beat your first playthrough of the game and there’s even a mode with a bonus series of dungeons labelled ’15 Nightmares.’ These allow you to jump into the shoes of the brawny Gestalt version of protagonist Nier. All of this feels like a good wink and a nudge to the loyal franchise fans, but it undoubtedly will leave newcomers behind.

The fact that NieR Replicant is obviously more for fans of the series is hardly a revolutionary observation. Though I can’t help but wish things were different. Where the game shines in its character work and environment setting, it is hurt by its obsessive attention to detail of every aspect of its world. Replicant is a game full of busy work and padding, often more egregious than 2020’s Final Fantasy VII Remake. Going back and forth between locations to a high degree to complete quests, and checking in to see each character’s thoughts on x event, are both something very common between the two Square Enix games.

However, with VII Remake, it at least felt all the more worth it by the end. That game is reshaped from its original in some really interesting ways by the time you roll credits. NieR Replicant doesn’t quite reach that degree that I so desperately wanted it to. Combine that grind with upwards of five replays to get the full story, and it’s a tall order for newcomers.

While there are bogged down moments of going on a wild goose chase for characters, there are rarer moments where the game benefits from slowing its pace. Enter interiors of buildings and you’re often transitioned to a 2D plain where you can have nice chats with locals or just admire the dollhouse-like views. Certain dungeons take isometric approaches, allowing you to see all of your surroundings while you explore corners and crevices for goodies or undoubtedly engage in some bullet hell style combat.

Dashing and slashing through some foes that fire projectile after projectile at you, all while you’re viewing from above, make for some of my more favourite moments in Replicant. It’s just a shame they’re a bit more few and far between.

Enter Replicant with patience and wonder and you’re also rewarded with some bizarrely curious designed environments. The Aerie offers a grim village carved into two opposing cliffsides, linked between rickety bridges and pathways. Knock on doors and you’ll hear terrified wails from the locals, begging the Shades to go away. The desert city Facade provides absurd architecture in the form of labyrinthian stairs mixed between buildings. At the centre of it rests canals with moving sands that can only be travelled across with rafts. Its inhabitants wear tribal costumes with masks obscuring their faces, constantly talking about the hundreds of thousands of rules they as an isolated civilisation have. Absolutely weird and wonderful!

Slicing and dicing, farming and fishing

NieR Replicant is without a doubt a solid Action-RPG. The combat is hack and slash in nature, allowing hero Nier to deck themselves out with varying weaponry be it swords, lances or spears. Here, you can wrangle up some pretty sweet combos as you juggle fighting large groups of enemies. Where the enemies aren’t so varied, they make up for it in the handiness that comes with taking them down. Eliminate your first gigantic boar and not only do you take home its tusk and meat but the ability to later ride boars across fields as means of travel. Taking down Shades on the other hand eventually grants you new ‘words’ to add to your weapons or magical attacks granting buffs.

As for the magic you can partake in within Replicant, it’s warmly welcome in mixing up the combat. With the guide of the powerful Weiss by your side, you can conjure magical fists to slam down and disperse groups. Alternatively, the magical lance comes in plenty handy for lining up and piercing through a long line of foes. Skill players will combine both the physical and magical methods of combat to pull off neat and ever so stylish attack chains in no time.

There are no particular detailed skill trees in NieR Replicant, only mixing and matching how you want to play. While you will gradually level up, it just adds to stats that make you stronger such as the damage you deal and your health meter. That doesn’t mean there’s not much room to grow. Swapping out my weapon and spell of choice to something more ranged for example proved beneficial in toppling some of the more monolithic bosses with very specific points that need to be hit. Mod these with words that’ll boost magic damage and maybe physical damage resistance and I’ve now covered my attack and defence for when a giant Shade made up of hundreds of small parts comes tumbling down on me.

Add on top of this the fact that Replicant also offers farming, trading and fishing and you’ll feel right at home in your little RPG world. These too can prove beneficial. The growth of certain plants and resources can be used in healing. Fish are often sought out highly in those dastardly fetch quests. Master trading and you can come away with a pretty penny if you sell some of the rarer items you find. If you’re one of the more patient RPG consumers, NieR Replicant does offer a little tantalising world to slip away to for hours on end. 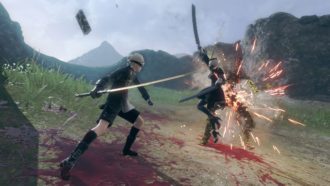 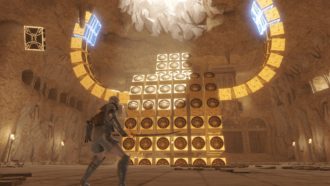 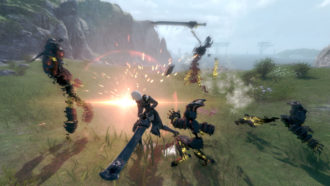 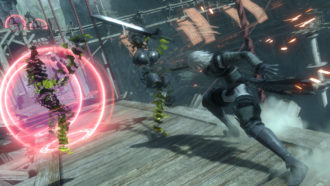 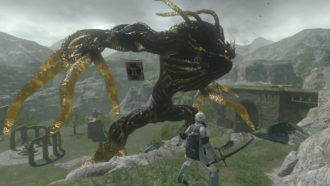 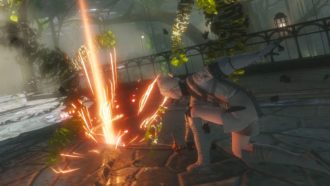 NieR Replicant is undeniably a good game. Problems aside, it does offer a fun and emotional adventure full of twists and turns, tragedy and death, betrayal and redemption. While this has ascertained that NieR as a franchise may not 100% be for me, I’ve come away from it understanding the fondness for both it and the absolute madman that is series director Yoko Taro. I’m so glad games like this get to exist.

It’s not hard to imagine NieR Replicant ver.1.22474487139… being the ultimate game that franchise fans were always begging for. On offer is an absolutely wonderful amount of world, lore and story to digest and fully absorb yourself in. It’s undoubtedly a magical game also, though it’s hard to picture this venture breaking the original out of its niche.

NieR is a wonderful, intriguing franchise that a select number are dearly devoted to, and rightly so. The game’s not entirely for me, especially considering all the backtracking, but it’s a weird and wonderful ride nevertheless. Keep doing you Yoko Taro. And let’s embrace the weird that is NieR.