Oddworld: Soulstorm is an action-adventure game with heavy platformer, crafting, and stealth elements. The title comes to us from Oddworld Inhabitants Inc. Originally founded by Lorne Lanning and Sherry McKenna, the Oddworld franchise has been around since 1997. Its story, lore, and visuals have come a long way since then, but the quintessential Oddworld experience has remained steadfast. With its trademark mix of platformer and stealth mechanics, the Oddworld games offer challenging levels for the most dedicated puzzle fans.

Some of Oddworld’s most popular titles are Oddworld: Abe’s Oddysee, Oddworld: Abe’s Exoddus, and Oddworld: New ’n Tasty. All set in the fictional Oddworld universe, these games feature the same protagonist: Abe. Abe is a Mudokon, a race native to the Oddworld planet that was enslaved by the Glukkon race to work on industrial farms known as RuptureFarms. In the very first Oddworld game, Abe discovers that the Glukkons are planning to turn Mudokons into an edible product to sell after their usual agricultural cattle-like species had gone extinct. Luckily, Abe is able to escape from the farm in question and, after discovering that he has unique powers, is able to save his fellow Mudokons from their fate.

The second game in the franchise, Oddworld: Abe’s Exoddus, sees Abe enjoying life after escaping the farms. His peaceful existence is quickly shattered when he discovers that the Glukkons have now started mining Necrum in the sacred Mudokon City of the Dead. They’re using Necrum to collect Mudokon bones and make super-addictive SoulStorm Brew, which makes the Mudokons that drink it violently ill.

With Oddworld: Soulstorm, the developers have created a retelling of Oddworld: Abe’s Exoddus. While it loosely follows the same structure as set out in the 1998 game, the tone in Oddworld: Soulstorm is remarkably more serious. While the series’ trademark dark humour and cheek are still very much there, it also feels like the developers were a lot more intentional about the chord they wanted to strike with the game’s story. With the updated visuals, Abe’s trademark big round eyes look more endearing than ever, and it’s easy to get invested in the fate of Abe and his fellow Mudokons after watching the very first cutscene.

Gameplay-wise, Oddworld: Soulstorm delivers the same solid formula as other Oddworld games in the series. Strongly focussed on platformer gameplay, Oddworld: Soulstorm sees you sneak past enemies, destroy obstacles, and save your fellow Mudokons as you complete tricky segments of gameplay. The levels, which are presented as highly detailed 2D landscapes, are divided into dedicated areas to complete. After each area, you get an overview and a badge score depending on how many Mudokons you managed to rescue, how many secret areas you were able to find, and how many lockers you were able to search. Depending on your score, you’ll be awarded with a bronze, silver, gold, or platinum badge. If you’re a dedicated completionist, you can choose to retake a certain area to unlock a better badge.

“…it’s easy to get invested in the fate of Abe and his fellow Mudokons after watching the very first cutscene.”

Within each level, stretches of gameplay are marked by checkpoints at regular intervals so that you don’t have to start over from scratch if you die. This is useful, since plenty of Oddworld: Soulstorm’s levels are tricky to complete. Timing feels key here, as you lead Abe through sneaky stealth sections, utilising his abilities and your surroundings to allow our alien friend to survive. Figuring out the best path to take and timing your movement and jumps so as not to alert enemies is crucial. In this sense, levels feel more like puzzles than a straightforward platformer, where performing your actions in the right sequence will keep you alive.

One of the weapons in your arsenal is the ability to collect and throw water bottles or Soulstorm bottles, which can be found in lockers along the way. Soulstorm brew is a highly flammable concoction and can be used to start a fire to kill enemies along the way. In turn, water bottles can be used to put out fires blocking your path. When enemies are patrolling a certain path in the game, you’ll often find yourself having to throw a bottle precisely when an enemy has their back turned, before jumping off a ledge at lightning speed. The same goes for craftable weapons like grenades. Often, you’ll have to make sure to aim your throw in a very specific way to take out enemies. If you miss your chance, you’ll be shot by enemies in the blink of an eye and the game will mercilessly propel you back to the previous checkpoint.

This often results in nail-biting gameplay. The difficulty of levels and puzzles in Oddworld clearly takes inspiration from older games that were often unforgiving. It doesn’t hold your hand or sprinkle the interface with clues. Instead, the game’s hints and tutorials are sparse, leaving the player to fill in the blanks. This sort of freedom in games is normally something I really enjoy. Next to more modern games that can sometimes over-explain things, figuring things out of the fly can be refreshing. However, when it came to Oddworld: Soulstorm, it quickly became frustrating because of the controls and a whole range of glitchy bugs I encountered. The game crashed randomly at times. There were also a number of times I had to restart the game, only to find I had been put in a completely different checkpoint than where I had last saved the game. Sometimes I skipped a few checkpoints in the level, while other times I found myself having to clear areas that I had completed previously.

On top of this, the controls felt clunky, which only made the whole experience more infuriating. When I first booted the game up on PC, I was disappointed to see that there was no ability to view the keyboard mapping, and there was no option to remap any of the controls, either. Even in the game’s tutorials, keys were displayed with controller symbols rather than letters, which meant I mostly had to improvise to get past obstacles early in the game. The controls weren’t very responsive for me either, particularly in stealth situations, which made the overall gameplay experience sluggish and cumbersome. This was incredibly frustrating, especially as it meant that I was often propelled back to the same checkpoint over, and over, and over again. I found this incredibly unfortunate, particularly after seeing the work and care that clearly went into Oddworld: Soulstorm’s detail and level design. Because of this, it felt particularly disappointing to be left scrambling a lot of the time, especially in levels where the timing of jumping on or climbing over a ledge was critical. 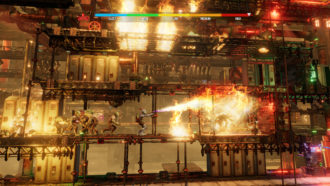 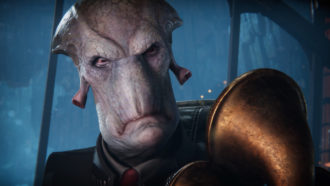 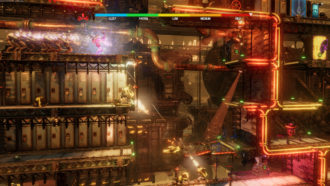 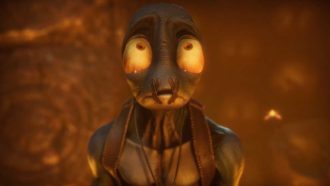 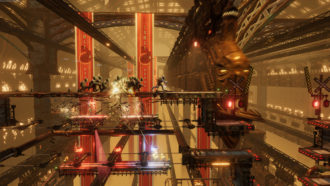 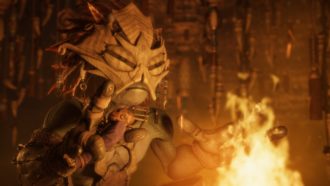 For me, Oddworld: Soulstorm’s redeeming quality is undoubtedly its visuals and narrative. While the Oddworld franchise has been around since the late 90’s and has dealt with some dark themes like slavery, the tone is notably more sinister and serious in Soulstorm, which comes through in its animation. Presented with stunning detail, it’s easy to get lost in its moody visuals and breathtaking environments. Time and time again, it was the story that pulled me back into the game when the mechanics let me down. The influence of Lorne Lanning and Sherry Brendan’s years of working in Hollywood is very clear. Watching the cutscenes, it becomes easy to imagine that you’re looking at a full-length animated movie, and the level of detail in characters’ animation is absolutely stunning.

If story is what you’re looking for in this latest Oddworld game, you won’t be disappointed. Abe is there in all his glory and better looking than ever. Just like Abe, the evil Glukkons are just as menacing as ever, too. In terms of a reimagining, the game masterfully delivers an immersive story with dazzling visuals. It’s just a shame the game’s messy controls don’t live up to the same standard.

Oddworld: Soulstorm is undoubtedly the best-looking entry in the series yet, with dazzling cutscenes and beautiful environments. However, when it comes to gameplay, Oddworld: Soulstorm comes with a lot of bugs, and clunky and confusing controls. This made the overall gameplay more sluggish and cumbersome than it ought to be, and, in turn, made tricky levels frustrating and tedious rather than pleasantly challenging. If you’re keen on the Oddworld franchise and are looking to get lost in Abe’s world once again, Oddworld: Soulstorm will have plenty on offer. However, if you’re looking for an immersive platform adventure with straightforward controls, Oddworld: Soulstorm might not be your best bet.