Quantum League Review – Not on my watch

What if you could take one round of an online shooter and play it from a different angle, knowing precisely what the other play was going to do? Quantum League attempts to revolutionise the first-person shooter concept with this unique idea. Players battle within a time loop, cloning your movement from the last round to get the upper hand on your opponent. With an interesting take on the competitive shooter formula, the paradoxical combat may have the chance to break through. Still, it will need the player base to support it.

As Quantum Athletes, players compete in 1v1 and 2v2 matches across nine different arenas. The colourful and vibrant stages are within stadiums, all with a level of verticality and movement, allowing for interesting plays using the time loop feature. The reality-breaking ability found within Quantum League essentially gives you three perspectives to kill opponents, capture points, and dominate the game. Set within a very Overwatch or Fortnite stylised universe, this sport is all about outsmarting the opponent with precision, speed, and time tactics.

If one of your clones gets killed, it gets desynced from the loop, and you can continue playing as a ghost. During this phase, ghosts can collect health pick-ups to join back in the loop or fire strategically at explosives or capture points. In the next round, you’ll start fresh alongside your previous clone. You can attempt to avenge a fallen clone by offing the old instance of your opponent before they killed you. As always with time manipulation, it’s not easy to explain – but somehow it works. The time-looping adds an original twist to competitive shooters. It requires a literal multi-dimensional strategy to win.

You’ll find players already discovering smart ways to get ahead of future rounds. Collecting health pick-ups as quickly as possible so they are unusable for desynced instances or bolting to the capture point on the first loop and protecting that clone for the rest of the game. These are legitimate plans that consider both the now, before, and after. It’s mind-bending at times when you encounter a new tactic, like a way of thinking you never would’ve understood unlocks in your brain. 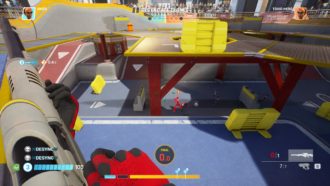 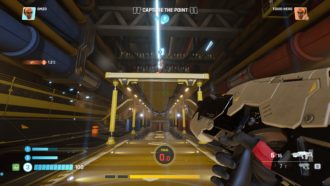 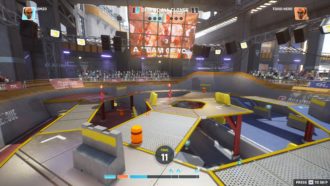 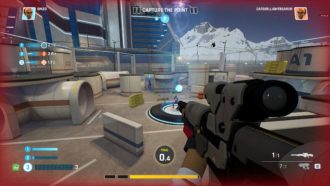 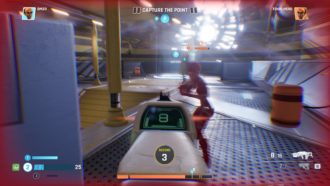 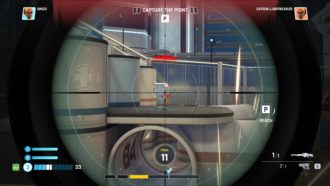 The game has six different characters to pick from, all with their own traits. Bjarne, from Denmark, can see clones with low health through solid objects. Jackie, a gymnast from New Orleans, moves faster when desynced. Unfortunately, their personalities are absolutely bland. While the UI and game present much like Overwatch, the actual character designs miss the mark. They are just ordinary people with no iconic features. Additionally, some are more effective in matches than others. Toure’s ability to take extra damage when sprinting is by far the best (at this time in the game’s meta), and characters like Levka who can briefly see desynced players seem utterly useless.

The arsenal is uninspiring, as well. There are six weapons to select at the start of each round; a standard handgun, machine gun, shotgun, and sniper rifle that work as expected. Joining them are a laser beam and a grenade launcher which are intriguing but woefully weak. Compared to the more straightforward weaponry, they take too long to kill or require too much precision to be useful. Quantum League clearly needs balancing and a stronger identity to survive.

And this is the strongest concern – longevity. Quantum League should be, and feels like, a free-to-play game, yet it isn’t. It has a small amount of content, a seasonal progression system, and an admittedly confusing concept; this game isn’t going to generate a big enough audience. Many players are already complaining about long wait times, particularly in ranked mode. For a competitive game to be successful, it needs an active and thriving community. Quantum League already feels like it needs a shakeup on its monetisation model or bring in new players through cross-play console support or it’ll suffer a similar fate as other multiplayer shooters like LawBreakers. 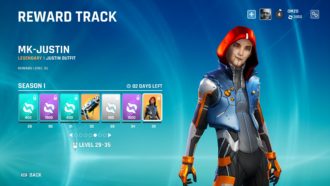 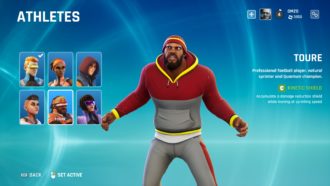 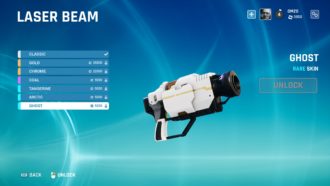 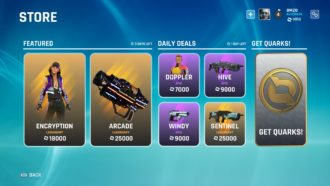 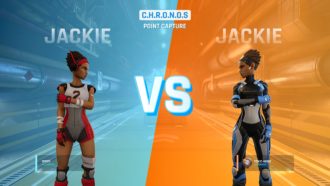 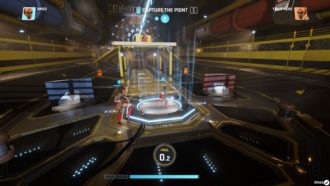 Developer/publisher Nimble Giant Entertainment are known for their involvement in vast MMO Champions of Regnum, a reboot of Master of Orion, and most recently and relevantly the fast-paced shooter Hellbound. All three are evidence of the studios quality, particularly for online multiplayer. Seemingly enough, Quantum League succeeds with excellent network quality. Playing one-on-one or two-on-two matches are nearly entirely rid of latency, somehow. Maybe the time loop mechanic affects this, running instances of players already saved on the player’s client. Some hit detection does need work, but overall gunplay is surprisingly tight.

Mechanically this is a wonderful first-person shooter that is fun to play with plenty of strategy and room to learn. Unfortunately, it adopts the popular smooth and colourful style, oversaturated by many other shooters already available. Lacking individuality to stand out, a significantly declining player base, and a potentially damaging business model; this game competes in the wrong league. If the developers can quickly reconsider their approach, maybe this shockingly distinct and sensational dimensional combat will get the attention it deserves. As it stands, Quantum League is an impressive shooter with a potentially wave-making time loop mechanic, but its style leaves it only a particle among the rest.