If you asked me what games in Nintendo’s backlog are begging for a Switch port, I wouldn’t even clock 2017’s Miitopia. The game serves as a very basic RPG adventure where players control a party of Miis, which are those little Nintendo custom avatars you first created all the way back on the Wii (a function scarcely used on the Switch). I honestly couldn’t think of a weaker fit for a Switch port. Just who was asking for a port of this random, average 3DS game? Certainly not me.

Miitopia’s first third at least often borders on being good. Then it outstays its welcome. Then it drags like hell.

Travel far and wide to save face

Miitopia has a very basic fantasy narrative going for it. Players are situated in the role of a hero Mii of their choosing (be it themselves or a ridiculous choice like pulling from the popular Miis from the original 3DS version such as King of the Hill’s Hank Hill). They then wander into the small, humble town of Greenhorne, a city populated by Miis. You’re asked to create Greenhorne’s members’ appearance, to match (or mismatch) the role they’ll play in the story. Before long, Miitopia’s main antagonist, the Dark Lord, comes and robs the Mii characters of their faces, placing them on supernatural creatures and foes you’ll have to fight on your journey to retrieve them. It’s not as gruesome as it sounds, I swear.

That’s about all the narrative covers. In Miitopia you’ll travel far and wide, gathering up party members and rescuing other civilisations from their ill fate of losing those oh so cute facial features. Where the Dark Lord is your primary antagonist, you will meet some secondary antagonists but they serve merely as a distraction and a way of ballooning the game’s length.

This is largely where Miitopia comes across its biggest fault: the constant moving of goalposts. Many chapters play out vastly similarly. Enter a city (be it a desert or fairy filled forest biome), gather up your party, return some Mii’s faces, and then be distracted by a side villain such as a genie. Defeat the villain and then get to the end of the chapter only for the Dark Lord to rob you of your powers and party members. You then start over again in a new environment, starting up with a new job and the need to create a new cast of party members all over again.

“This is largely where Miitopia comes across its biggest fault: the constant moving of goalposts.”

It’s also here that players will realise how mismatched for the Switch Miitopia really is. In the original version of the game, it felt at home on a lovely little handheld console where the use of Miis was as big as ever. Players could pick from any of their friends’ (or their own) vast library of Miis from the Mii Plaza. The novelty of adding your friends into an RPG experience was always there and always easy. In the Switch version, it isn’t that simple. That’s because hardly anyone uses Miis for Nintendo’s current generation.

Players have a number of options for adding Miis to the game, but none all that quick and efficient. They can go the slow, methodical way of crafting another Mii from scratch (it’ll get old, fast). Or, one can find themselves digging for gold in the often humourous trash that is the popular library of in-game Miis. The slowest means but perhaps the most eventually rewarding is to pull your phone out of your pocket and go online and find the code for some cool pop culture characters you’re after. All of these feel so much more tedious when you’re tasked with creating upwards of your 30th Mii for the game.

Yes, as marketing for the game and discussion around it may very well allude, modifying and working with your party is where Miitopia shines the brightest. The Mii creation tool is quite robust while maintaining a simple, cartoonish design and that’s only bolstered by the new makeup and wig features added in Miitopia’s Switch version. What’s on offer here is quite a diverse customisation suite. Now, players can really get into the nitty-gritty and create whoever they want in cartoon form to quite the close degree. The results of those more creative than I are actually quite impressive.

Alas, I’m not as gifted in the Mii creation arts, and so I largely took the route of finding neat designs of cute characters online and added them into my game. For the record, Hatsune Miku, Thor, Sans from Undertale, Rosalina and Zukofrom Avatar: The Last Airbender are just some of the Avengers-style team-ups I created in my time. Placing these beloved characters together only allowed me to be invested in their growth and bonding even more.

Miitopia allows for plenty of time for characters to develop their bonds via scripted interactions in the inns you’ll find along the way or going on small one-on-one trips. Not only is seeing Waluigi interact with Peter Griffin so dumb and amusing to all audiences, but it’s actually also rewarding. The higher your bond level, the higher suite of skills your party members will have to aid you in fights. Gather up enough of these skills and your fellow party members can at random moments jump in for a second hit at an enemy right after you, or give you words of encouragement to heal you just that little bit. 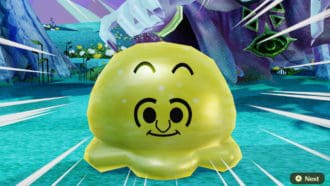 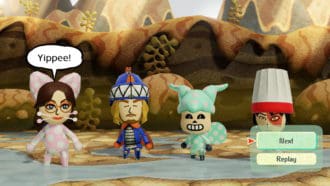 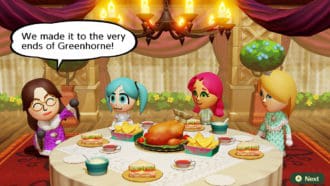 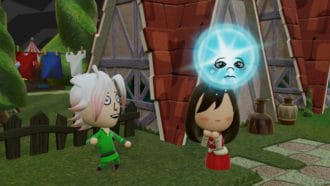 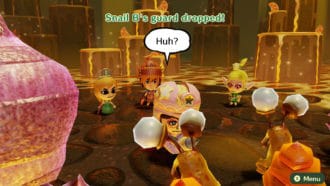 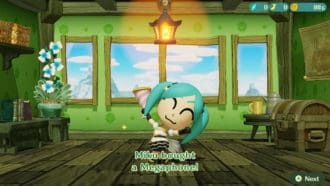 Other ways to bolster your party member is by gathering up enough gold that when they arrive at an inn and request either an armour piece or weapon with higher stats, you can give them the pocket money they need to go out and obtain such an item (or, comically, sheepishly return with something entirely different out of greed). Job types (Miitopia’s equivalent of classes) and character personality traits also play an entirely crucial part in developing your party. Both, like the skills that come from bonding, will do their best to mix up the combat. A higher level in jobs can really help to stack up some damage while I found great delight in my lead character’s air-headed personality trait, which often left her confused and forgetting what she was doing mid-battle. Still, try as it might, Miitopia’s Switch port can’t help but feel too much like a basic product of its time on the 3DS.

Miitopia also leaves much to be desired for its combat by today’s Nintendo Switch standards. I understand this is a game largely made for kids. It actually functions quite well as perhaps the first-ever RPG a child may get their hands on. Miitopia’s combat is, simply put, basic as all hell, even including the attempt at using other elements to mix it up. You’ll never break a sweat in the many upon many fights you’ll find yourself in, and before long will become quite bored at these encounters’ frequency and lack of evolution. It’s the very first RPG I went and turned on Auto-Battle mode for after a few hours, something I’m normally very disciplined at not doing.

This is entirely a game that can be played on autopilot and that’s okay. Sometimes you need that. In fact, Miitopia would be a great adventure for just that if it were but a fraction of its actual length. By hour ten of the game’s thirty or so hour campaign, it feels like you’ve already seen everything, both in regards to the story and combat. In each chapter you’re going to build up a team you start to find beloved, only for them to be taken away. Repeat. That’s it.

Miitopia isn’t particularly a bad game. In fact, the 3DS version did provide some solid fun. Come to the Switch however and it has enough flaws that stack up and make it an at times quite frustrating experience. It’s a shame too. Miitopia is frankly a previously under-appreciated title that deserves more.

I understand Nintendo seeing an appeal in releasing Miitopia on the Switch. It’s that kind of family-friendly adventure with social capabilities that’ll help it remain in the zeitgeist whilst also generating money. Still, I can’t help but be frustrated by the minimal additions the game has on offer with this new port. Miis are but a second thought on the Nintendo Switch, and that’s more apparent than ever in playing Miitopia and seeing how round-about your options are in obtaining those cute little avatars. This is a port that had very little runway and lead-up of integrated systems on the console to provide a comfortable home for it.

On a 3DS, Miitopia is a great and fun delightful integration. On the Switch, it’s only a decent adventure with some laughs and time-killing to be had. I wanted more.