An intergalactic voyage to a prohibited planet. An alien landscape shrouded in mystery. A loop that brings you rushing back to the moment of a harrowing crash. One woman exploring her past as she attempts to make sense of her present. Returnal is a monumental release from studio Housemarque and Sony Interactive Entertainment. It’s one of the first PS5 exclusive releases, a pretty sizeable change of direction for the studio behind it, and probably the biggest release the roguelike genre has ever seen.

This third-person shooter combines elements from developer Housemarque’s ‘bullet hell’ past to bring a uniquely stylised action title to the PS5. Exploring the surface of Atropos, players will encounter wild and dangerous beasts as they look to find answers amongst a sea of mystery. The world is adaptive and constantly changing as you search for upgrades and look to progress despite a time loop that sucks you back to the beginning of the game every time you die. It’s a game of intrigue and one that brings some serious challenge but also an adventure I can unequivocally recommend.

Returnal tells the story of a lone cosmonaut, defiantly drawn to a prohibited planet where she crash lands and finds herself stranded. The adventurer, Selene, finds herself intrinsically drawn to this ever-changing planet, searching for the source of what she dubs the “white shadow”. It doesn’t take long before Selene and the player uncover some bizarre and intriguing details of an intelligent alien race as well as what looks to be corpses of her former self. It turns out Selene is stuck in a time loop that resets at the moment of the crash every time she dies. The game’s narrative is mysterious, at times ambiguous, and definitely takes a back seat to the gameplay for the majority of the experience. Yet the drip-feeding of lore and story details is captivating and enticing from start to finish. Selene not only looks to find out the secrets of the planet, but she’s also seeing flashes of strange visions as she explores moments from her past and uncovers the meaning behind the time loop.

Roguelike games have famously struggled to tell strong narratives in the past as the ‘permadeath’ format inhibited the way a traditional narrative would unfold. The constant stopping, starting, and replaying meant that gameplay was always the focus above all else. Returnal finds a way to buck this trend by keeping the player on tenterhooks throughout. I found myself constantly fascinated and intrigued by the mysteries this game introduces. Whilst not all questions are answered in the end, the rollercoaster of reveals and plot advancements kept me engrossed.

Uncovering details of her past as she explores her childhood home that strangely keeps reappearing in the first area of the game is super gratifying and functions as a fantastic change of pace whilst providing more narrative details. One moment halfway through the game had me incredibly excited as the melancholy and inescapability of the narrative took full force. Returnal, above all else, manages to create a sombre, curious, and at times horrifying atmosphere that works marvellously in the game’s favour.

“Returnal, above all else, manages to create a sombre, curious, and at times horrifying atmosphere…”

I also never found myself bored by the game’s loop. Whilst you do replay areas of the game over and over again, the way the world changes keeps things fresh and unpredictable. You’re also likely to find new things every single time, whether it’s a new voice recording left by Selene or a brand new moment of narrative exposition. It always feels like progress is being made whilst you’re playing Returnal, and in a genre like this, that’s a mighty fine achievement.

The game plays like a typical third-person shooter, although this one has a major emphasis on dodging enemy projectiles and environmental traps. Foes will fire vibrant, slow-moving projectiles that Selene will need to avoid, less she starts her journey anew at the site of the crash. Dashing, jumping, and sprinting will be key here as standing in one spot for too long will no doubt lead to her grizzly demise and resurrection. The pace of the gameplay feels great and the visual style of the enemy attack patterns is super satisfying. Housemarque have obviously learned well from their previous work, bringing stylistic and mechanical choices from some of their past titles into a new format. I love how unique this game feels, with obvious inspirations coming from different areas of gaming history. It all works too. The gameplay feels frenetic and engaging with enough variance from run to run to help ensure things never feel stale. It’s also worth highlighting just how well implemented the DualSense’s Haptic Feedback and Adaptive Triggers are here too, as well as the use of 3D audio when I popped my headphones on. The immersion and feedback is mighty satisfying with the controller once again proving its worth for a “next-gen” game feel. 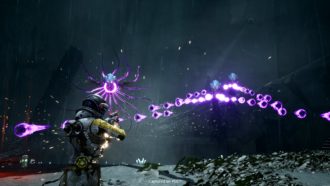 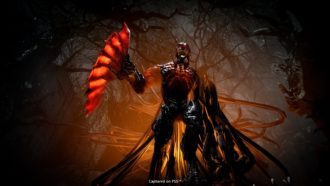 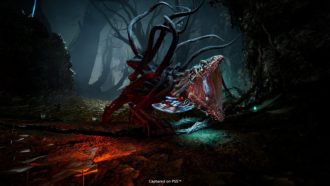 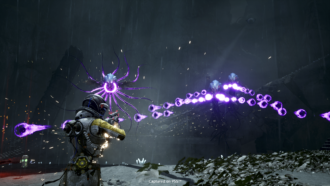 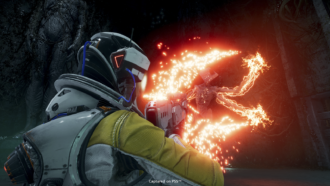 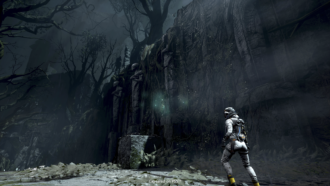 The interconnected world you’re exploring is daunting but well-thought-out. Preset “rooms” are stitched together in random patterns with small differences that keep things feeling polished yet unpredictable. It’s really interesting to see how Housemarque have managed to successfully combine quite immersive and serious narrative components and visuals with some admittedly very flippant “video-gamey” elements. Different doors will be marked to signify what’s behind them and glowing orbs will fill the screen as you dodge and weave between them. At first it’s a little jarring, but eventually it all feels quite normal and intuitive. Clever little details are found all throughout this experience too and it gives the game a real sense of polish and intelligence. I appreciate that collecting health pickups even at full health has its benefits and I love that you can see which doors lead to bonus rooms and which ones lead to progression. These examples and many more show an understanding that goes deeper than your average roguelike experience. I hope to see some ideas borrowed from Returnal and applied to more games in the future. It’s small but it’s genuinely quite impressive.

The game also handles progression really elegantly. As you play you’ll collect different weapons as well as artefacts that provide passive bonuses. In typical roguelike fashion, this means that each run plays slightly differently as you lean into the randomised tools you’ve been given and the playstyle that fits best with your setup. Upon death, you’ll lose all of this gear and have to start fresh. This doesn’t mean that nothing permeates between runs, however. A currency by the name of Ether is retained even through death, allowing you to buy small advantages for yourself whenever you see fit, should you have enough currency. You’ll also unlock new gear that will begin to show up on future runs as well as set tools that will retain beyond death. A sword, for instance, is unlocked early on but you never lose it. This not only grants the ability to perform melee attack but also allows you to slice through vines to reach previously inaccessible areas. Other tools just like this one are scattered throughout Returnal and unlocked after achieving meaningful victories. It means that there’s always a next step to strive towards and small goals to accomplish along the journey. It’s actually all very smart design that keeps the player achieving whilst not necerssarily finishing the game. It also means the game slowly but surely gets easier over time, allowing players of varying skill to feel that progression and reach the end.

The game is surprisingly long. 6 distinct areas are available with boss battles scattered between. The game will take you to different parts of Atropos and the constant changing of scenery is refreshing. It also just feels like such a journey with the environments you visit often tied to narrative elements as Selene ventures deeper into her journey and into her own madness. I comfortably got 20-30 hours of gameplay before “completing” the game, but even then there’s still heaps for me to unlock and see.

One of the game’s only detractors would have to be its lack of save functionality. It’s not uncommon for the roguelike genre to not allow players to save, instead wanting them to complete a run before they quit. Returnal has quite a unique problem here though because it’s quite large for a roguelike experience, easily taking 2+ hours to finish a successful run (assuming you take your time and explore like me). The increased scope is super satisfying, but it also means you’ll definitely want to save your journey at times and find yourself unable. The PS5’s rest functionality helps but doesn’t fully fix the issue. My heart goes out to those who got quite deep on a fruitful run but lost their progress due to a factor outside of their control. An annoyance for sure, but not something that ruined this otherwise incredible game for me.

Returnal comes in with some new ideas and finds a way to implement them incredibly well. The game has an attention to detail and a unique sense of style that goes beyond anything I would have expected from this comparatively small development studio. It’s a roguelike with a great deal of substance and scope and feels really good with a DualSense in your hands. Despite one decently sizable detractor in its lack of autosave functionality, Returnal proves to be a remarkably fun and satisfying experience from beginning to end.