Skate City is a side-scrolling skateboarding game developed by Agens and Room8 and published by Snowman. The title was originally developed as a mobile game for iOS, releasing on Apple Arcade in 2019. It’s now getting more love, releasing across multiple consoles and PC.

With its 4.8 stars on the App Store, it’s easy to see that the original release of Skate City on mobile was popular. Perhaps this isn’t surprising; after enjoying huge popularity in the 2000s, largely fuelled by the Tony Hawk franchise, things went quiet on the skating games front for a while. More recently, however, there has been a renewed demand for skating games. The release of Skater XL in 2020 was highly anticipated, and the remastered versions of Tony Hawk Pro Skater 1 and 2 were much loved.

For me, the pull of the Tony Hawk games has never gone away. Skating games are always something I look forward to, especially since, when done well, they bring a unique blend of relaxing gameplay and refreshing mechanics to the table. So, when I heard about Skate City and its positive reviews on the App Store, I was intrigued.

The aim of Skate City is simple: keep skating and perform as many tricks as you can – the more complex the skating tricks, the better. The game offers two modes: endless mode, where you can skate endlessly without any time limits, and challenge mode, where you’ll have to perform tricks within a certain timeframe to complete challenges. Completing these challenges will earn you skate cred, which you can use in the skate shop to customise your skating character or to unlock different skating locations in the game. While you start your skating adventure in Los Angeles, you eventually unlock two more locations: Barcelona and Oslo.

The first thing that immediately stood out to me when booting up Skate City was its graphics. Stylish and colourful, Skate City presents a wonderfully sleek and minimal aesthetic that pairs perfectly with a laidback gameplay experience. Combined with a great lo-fi soundtrack, Skate City effortlessly provides the chill atmosphere that makes skating games so enjoyable.

While Skate City’s design is very easy on the eye, the minimal graphics belie the game’s complexity. For a title that was originally released as a mobile game, Skate City comes with a surprising number of tricks ranging from spins to flips and complicated combos, all of which take a while to get the hang of. While the game makes tricks look easy, it took me two or three hours to wrap my head around the different kinds of tricks and how to perform them. 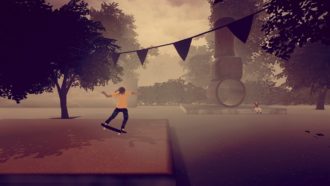 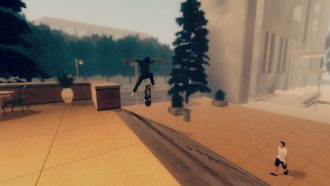 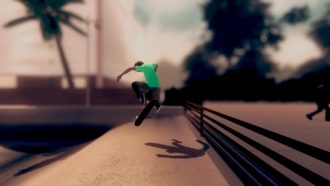 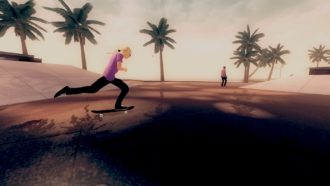 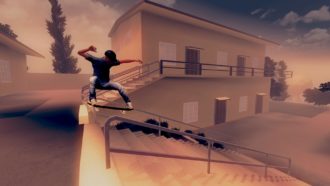 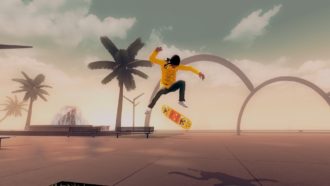 I found that Skate City provided a nice degree of complexity to make the overall game more engaging. The fact that it takes some skill to land a perfect combo makes it all the more satisfying when you finally manage it.

“…Skate City is a compact little gem in the skating genre that packs a surprising punch.”

The one thing that was hard to deal with were the game’s controls whilst using mouse and keyboard. While the overall aim of Skate City is straightforward — to perform tricks — the keyboard and mouse controls to perform them are much less so. Without a controller, you’ll find yourself using a combination of mouse clicks and keyboard keys simultaneously, which can be clunky. Having grown up with Tony Hawk, I associate skating games with mashing the controller to see what tricks your character can come up with. In Skate City, however, having to rely on both mouse and keyboard makes things cumbersome, especially considering challenge mode is built on improving your skill level. If you’re playing on Skate City’s challenge mode on PC, my one piece of advice would be to use a controller if you have one. Things can feel tedious and fiddly without a controller, which can easily puncture the relaxed gameplay environment the creators of Skate City have crafted so beautifully.

It feels like the purpose of Skate City is not to offer a big and engrossing skating world in the tradition of Tony Hawk. Rather, it seems to be centred more on providing casual and relaxing gameplay. If you’re looking for a chill skating fix without the pressure of scored challenges, endless mode will be perfect for you. I found that after a long and busy day, Skate City’s endless mode was the perfect thing to lose myself in. In this way, I could see the appeal of playing the game on the go. To me, it felt like the perfect way to unwind during the commute home, and judging by its great ratings on the App Store, this is a common sentiment.

Overall, Skate City is a compact little gem in the skating genre that packs a surprising punch for its size and scope. If you’re looking for a quick and casual skating fix with gorgeous graphics to relax to, Skate City will be right up your alley. Just make sure that if you’re playing on PC, you’ve got a controller at the ready.

Skate City is a visually stunning game with an incredibly catchy soundtrack. It effortlessly provides the chill gameplay environment that skating games are renowned for, complete with sleek and minimal graphics. The controls with a mouse and keyboard, however, can feel counterintuitive, and if you’re looking for a layered and complex experience like Tony Hawk, Skate City might fall short. However, if you’re looking for a relaxing skating game to help you unwind at the end of a busy day, you’ll find that Skate City does the trick superbly.