Solasta: Crown of the Magister Review – A natural 20

Dungeons and Dragons (D&D) players have long wished for a true representation of the popular tabletop experience in video game form and Solasta: Crown of the Magister seems to do just that. The turn-based tactical role-playing game uses the System Reference Document (SRD) 5.1 Ruleset to base how the entire adventure plays out. You’ll be rolling for initiative at the start of all combat, take attacks of opportunity, and roll saving throws and checks to complete quests.

Created and written by dedicated veterans of pen and paper RPGs, Tactical Adventures has developed and self-published this game with official licensing from Wizards of the Coast. The small but passionate team have been incorporating players’ feedback since October 2020 during an Early Access phase, and it seems there are many changes to refine the experience. Solasta: Crown of the Magister nails the D&D gameplay but still doesn’t quite match the high standard other CRPGs have set.

Lizards, crowns, and a party of snarky heroes

Players build and control four unique characters along a journey that starts within the capital of the Principality of Masgarth and ventures out into the dangerous Badlands. Construct each hero from the ground up, picking their background, class, race, personalities, attributes, feats, proficiencies, starting equipment, and of course their look. Once you’ve taken nearly an hour to create each character and develop their backstories intimately, they can now begin a quest of mysterious lizard people known as Soraks and a mystifying Crown that shares visions of a cataclysm.

“…if the 30-40 hour campaign isn’t good enough, there’ll be plenty of custom-made adventures to try.”

Character creation is precisely what any D&D player will expect from a game that boasts an SRD 5.1 ruleset. There is much to digest and customisation allows for full role-play immersion or a quick set-up with pre-made heroes. While it may seem intimidating for those who haven’t played an RPG like this, incredibly intuitive tutorials walk you through everything, from what a proficiency bonus does to how the user interface works. Building adventurers from scratch naturally establishes a strong relationship between player and character. You’ll want to pick responses and actions more relevant to their personalities than what’s beneficial for the playthrough.

However, this does hurt the directed narrative. With four customised characters, their backstories aren’t fully fleshed out beyond what you may externally provide for them. If you’re into role-playing, this will be great. Although, this means other NPCs, quests, and lore don’t directly connect with the crew. Your band of deputies are essentially dropped into a giant mess and The Legacy Council hire them to solve the exponentially growing crisis. Despite a charming introduction and tutorial sequence in the tavern where each character reminisces on an encounter, there isn’t any progression or deeper context for their personalities. Many dialogue options in the game are made as a collective, meaning individual personalities of each don’t often impact conversations. Divinity: Original Sin and other CRPGs develop distinctive pathways while still having player-created characters, so it’s disappointing Solasta: Crown of the Magister doesn’t do better.

Issues with the story won’t be of too much concern when the title releases. With an intuitive Dungeon Maker Tool and mod support, the potential for outstanding tales and challenging quests is impressive. Many players are already taking to the mode, planning full D&D campaigns using the tools the developers have provided. Notably, this remains in Beta upon release and needs improvements like more options for creatures and environment controls. In any case, if the 30-40 hour campaign isn’t good enough, there’ll be plenty of custom-made adventures to try. 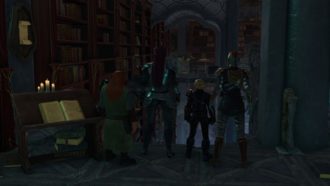 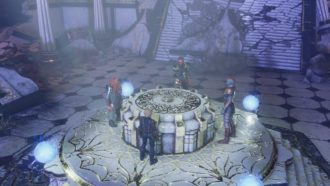 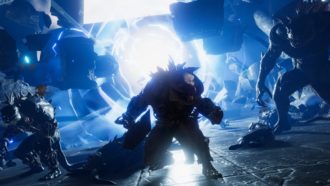 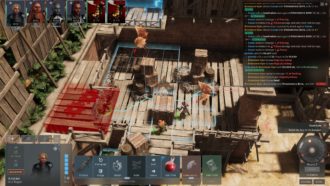 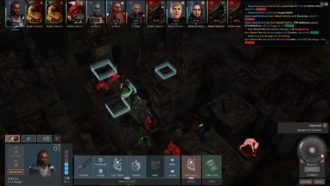 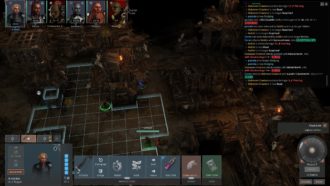 Combat is an outstanding representation of D&D SRD 5.1 in the virtual form. While the ruleset differs slightly from most CRPGs, it’s not hard to learn and understand the nuances. Each class has their playstyle and abilities for the player to learn, whether it’s how best to utilise a wizard’s spells before a long rest or to make use of a rogue’s extra combat actions each turn. The game also introduces a third dimension that traditional pen and paper experiences don’t usually provide; vertical layers, enemies that crawl on walls, and stealth options to help get an advantage. The extra dimension also enables interactive objects like falling hazards to exploit during combat, dealing considerable damage at the right time.

“The game takes liberties with the ruleset, changing specific mechanics to suit enjoyable gameplay… all welcome and reasonable choices to enhance the experience.”

The game takes liberties with the ruleset, changing specific mechanics to suit enjoyable gameplay. Players can swap weapons once per turn, on the fly, unlike most tabletop rules. The game also restricts players from using equipment they aren’t proficient in to help less knowledgeable players avoid frustration. Finally, quite a few changes are made to spell mechanics and specific spells themselves to work better in the video game format. All welcome and reasonable choices to enhance the experience.

The entire premise is based around dice rolls impacted by a character’s skill points and proficiencies. Every attack and spell needs a roll to hit and a roll for damage. For example, when using Dodge, all attackers have a disadvantage on their rolls to hit and you have an advantage on Dexterity saving throws to avoid damage. Often, the uncertainty of a dice roll ends in frustration when characters with great stats are swinging and missing, turn after turn. Yet, that’s part of the mechanic and something D&D players will be familiar with.

With so many dice rolls happening every action, sometimes they’ll be lost in the fray. While the tutorial tips help explain most of the mechanics, rolls can be unexplained or seemingly go off with no indication as to what it did or why it happened. There is a roll that happens when combat concludes, which didn’t make any effect. After looking it up, the roll was for a lore check on defeated enemies, and if succeeded, an extra tier of knowledge unlocks for that creature. Random rolls like this will happen which need more understanding or reason. 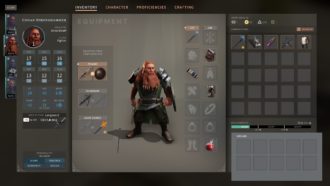 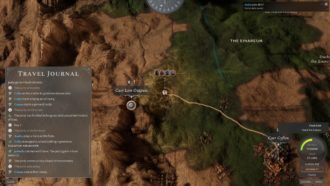 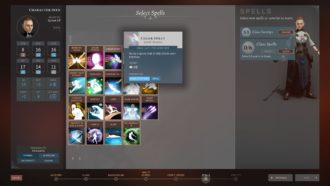 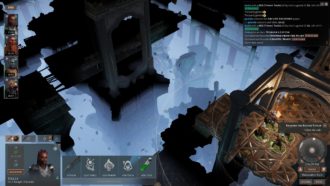 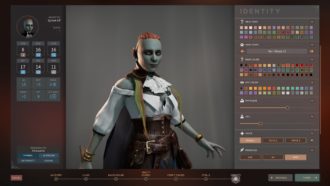 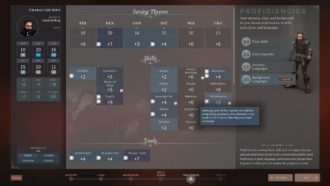 Roll for a saving throw

Crafting is available to help the crew forge new weapons or develop poisons to apply to arrows. While it is simple enough, it isn’t the best-described system in the game. Crafting requires proficiency with a particular kit, the recipe, a character who can learn it, and the right ingredients. Then, items take in-game hours to craft and only one item per hero, which can unexpectedly take some time. Crafting doesn’t always work as intended, with some spells being unmakeable for confusing reasons, such as not being able to create a Scroll of Cure Wounds despite the knowledge of the spell already known to the character. It’s uncertain if crafting issues are a bug or just not properly clarified.

Oddities like this happen too commonly throughout the adventure. During combat, enemies may freeze during their phase and result in a save reset. Sometimes characters will get stuck while exploring caves or structures with various levels or gaps and a bit of fidgeting is needed to get them moving again. Other times, quest items simply don’t show up, like searching for Sorak equipment after clearing out the Caer Lem Outpost. After being in Early Access for seven months, it’s a little upsetting to see so many bugs unsquashed.

Visually, this isn’t the most impressive RPG. There are moments of beautiful world design and art, such as the magical library where the party first encounters Priest Sorak. Yet, the character models themselves aren’t going to win any awards. They often look sick or clay-like with some stiff animations. The team at Tactical Adventurer are very much aware of this, even going so far as to say on the Steam Community Forums “…it is no secret that the characters in Baldur’s Gate 3 are absolutely gorgeous when you compare them to ours”. They are realistic about their mediocre graphics yet still demonstrate a lot of heart for their art.

Adversely, Solasta: Crown of the Magister has one of the richest and most memorable soundtracks of CRPGs to date. Somehow the developers have orchestral genius Maxime Hervé on the project to produce some outstanding music. “World of Light” is the centrepiece to the tracklist and a mighty symphony of expert musicianship and audio engineering. From the booming horns to the short and fleeting melodies of the woodwinds scattered throughout this one track, it’s undeniable how remarkable the rest of the score is. The original soundtrack is now a 2LP vinyl release with 23 tracks that will be a must-buy for anyone who digs deep into the game.

Dungeons and Dragons fans and CRPG veterans are going to love this game. Delving into forgotten dungeons with a cast of custom heroes who rely on well-planned character builds and combat scenarios is admittedly not ground-breaking. However, licensing the official tabletop ruleset and translating it so well into a video game will pique many people’s interest and pull them in for the long haul. The game also boasts an exceptionally produced score full of whimsy and spectacle, an outstanding Dungeon Making Tool that continues to progress, and a quite informative tutorial for beginners. Undoubtedly, parts of the mechanics need further explanation and plenty of bugs need addressing. Players who want a shiny coat of polish will not find it here. Regardless, it’s amazing the depth and quality this indie studio has ardently delivered. Solasta: Crown of the Magister is a sure critical hit.