The Companion Review – A flawed beauty

Swirling wisps of spiritual energy guide you through atmospheric landscapes in The Companion, a solo-developed walking simulator featuring gorgeous magical biomes and a time-shifting story. As a spirit that takes the form of a wolf, you’ll traverse the land collecting spiritual essence and activating ancient runestones, all the while piecing together the fragments of a human family’s hazardous journey.

The Companion is the latest in a wonderful tradition of atmospheric narrative-based adventures featuring spiritual animals, continuing in the vein of last year’s Spirit of the North and 2017’s The First Tree. Promising “a story of mystery, intrigue, and adventure” and an emotional experience that links your ethereal character with the family in the corporeal realm, just how does this lupine tale fare?

In true walking-sim fashion, you spend your time in The Companion wandering beautiful environments between story beats. Across the land, glowing bundles of light are scattered, indicating patches of Essence that need to be collected to power your abilities. The first ability summons a Wisp, which flies through the air and guides you to points of interest, which could be a discarded Artifact, a spiritual Vision, or a Runic Stone. The stones add to your spiritual energy (which is needed to lower the cooldown on your Dash ability once unlocked, as well as advance to later chapters) and also grant you a free Wisp to the next location. Since there are 90 Runic Stones in total, much of the gameplay is spent travelling between them.

Artifacts are different items left behind by the human family. Examining these items plays a short cutscene of a family member interacting with the item in some way, and also unlocks a nearby Vision. Visions are longer, unskippable cutscenes that elaborate on the family’s journey and relationships. You’ll occasionally be called upon to act during a Vision in different ways. Some have you appearing in the corporeal realm in order to make the family trust you, and others see you chasing off wild animals or monsters to keep the family safe. You unlock abilities as the game progresses that can be used in certain Visions, such as sitting to show friendliness or snarling to ward off foes. Visions can take place at any point in time and don’t necessarily have to be seen in any particular order within a chapter, making them feel like fleeting snippets of the family’s life.

The story told by Visions in The Companion is fragmented and non-linear, tasking the player with piecing together its details. The family – consisting of Mother, Father, twins Cody and Jess, and young daughter Daisy – have left their usual life behind so that the Father can perform a mysterious duty, involving protecting the world from “them”. Throughout the story, we learn that perhaps Cody fell victim to “them” while exploring the wilderness, and the subsequent chapters show snippets of Cody’s trials as well as the family dealing with losing him. It’s… confusing, to be honest. You never really develop an emotional connection to the characters since the time between Visions can be incredibly long, and there’s a lack of coherence throughout that never quite resolves. The voice acting is excellent for the most part, though heavy-handed writing doesn’t make the dialogue compelling enough to justify much interest in the family’s plight.

This is a bit of a problem in a game where the story is supposed to be the hook, especially since the moment-to-moment gameplay occasionally crosses the line from relaxing to absolute tedium. The issue is one of pacing, and frankly, it’s a major issue. Between Visions, you spend time chasing your Wisps across the landscape gathering Essence, which you spend on more Wisps once you’ve collected the next Artifact or Vision. This would be fine, if you didn’t need to use Essence for activating Runic Stones or using your other abilities, leading to sections where you need to run around effectively grinding for Essence. Following the Wisp itself occasionally feels like an early-2000s escort mission. I counted one journey from Wisp-to-destination that took over three minutes, with me needing to pause and wait for it to catch up every few metres. Add these issues to the unskippable dialogue in cutscenes, janky physics and camera that slow you down, and the ability to “fail” certain Visions that must then be repeated in order to progress, and it all leads to an experience that feels less like an ambient, emotional journey and more like a series of efforts to waste the player’s time. 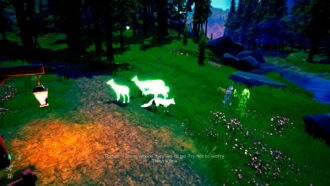 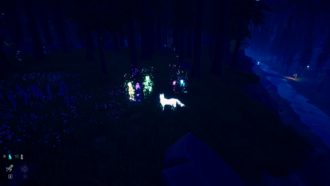 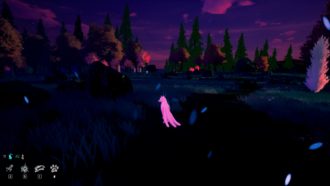 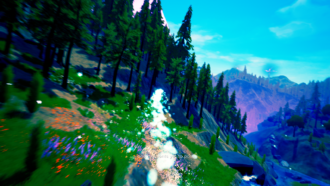 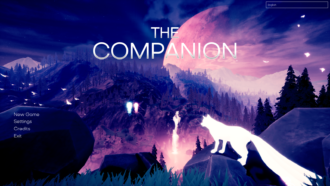 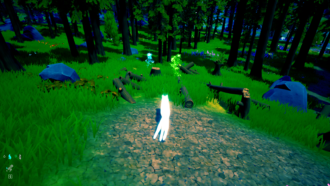 It’s a real shame that The Companion struggles with its pacing, since its presentation is so incredible. The beautifully ethereal colour palette, stunning particle and lighting effects, and lovingly crafted environments speak volumes of developer David Fazzio’s aesthetic prowess. Composer Hew Wagner’s soundtrack is similarly excellent, providing distinct thematic ambience to each biome and moments of tension throughout narrative sequences. The bones of an incredible experience are here, and encouragingly Fazzio is engaging with the community to elicit feedback – however, in its current state, it’s difficult to recommend The Companion as a compelling narrative adventure.

The Companion presents a compelling premise that just manages to fall short of an engaging experience. While it showcases some beautiful artwork in its visuals and creates a magical atmosphere with its environments and sound design, the actual gameplay becomes repetitive and frustrating over time. Issues with pacing interfere with what could have been a more streamlined walking-sim experience, and arbitrary padding makes the fragmented narrative difficult to appreciate. Those looking for a compelling story might want to wait a few months for some developer updates, while folks keen to lose themselves in a gorgeous fantasy realm might still find joy in The Companion in its current state.