Imagine Earth is a strategy simulation game developed and published by Serious Bros. The game was partially funded through a successful crowdfunding campaign and originally released on Steam in Early Access in 2014. It comes with a campaign mode, a competitive mode, and an endless mode.

Set in the year 2048, Imagine Earth depicts a world where all of Earth’s resources have been depleted. In search of further resources, big energy companies have ventured out into space to colonise other planets, in the hope of making more profits. Playing as an employee working for a smaller company, it’s your job to colonise new planets and create a liveable environment for your people. In the process, you’ll have to take on the big corporations, obtain enough resources for your people, and create good living conditions for your colony.

At first glance, Imagine Earth has a lot in common with games like Civilization and Age of Wonders. Starting out with a simple tutorial, you’ll build a city centre, place farms to cultivate food, and build coal plants to harvest enough energy to keep everything running. Just like other games in the genre, you’ll find yourself building structures on a hex-based map and slowly expanding the borders of your territory. Once you set up a warehouse and a trading post, you’ll be able to mine gold dotted around the map, and sell minerals, resources, and gold pieces to merchants. While the tutorial is a great way to grasp the basics of the game, I did find it unclear in some places and overly descriptive in others. The interface can be a bit confusing too, but if you’re familiar with other strategy titles, you’ll be able to grasp the essentials quickly.

The game’s two main modes are campaign mode and competitive mode. While campaign mode sees you completing the game’s story and getting promoted from one planet onto the next, competition mode sees you competing with rival companies in a very similar format to Civilization or Humankind. There are competing AI colonies on the map, and the game features a mechanic where you can buy shares in your opponent’s companies, giving you the option of buying a rival company out of the game completely. In total, Imagine Earth features nine planets with very different biomes to explore, all of which are visually stunning and a delight.

While I found the overall premise of Imagine Earth intriguing, it didn’t strike me as especially different to franchises like Anno, Endless Space, or Civilization. My interest was only piqued further once I got stuck into the smaller details of the game. Where things become more interesting is in Imagine Earth’s mechanics surrounding research, energy, pollution, and natural disasters. Similar to other strategy titles, new technologies and upgrades to existing buildings are obtained through a research tree, but there’s a catch: while you do have the option to obtain research over a set amount of time, you also have the option of unlocking it through a tech license, which will cost you. As the world of Imagine Earth is overrun with large corporations looking to capitalise on natural resources and research, you’ll quickly discover that most research licenses are already bought up and patented by larger companies. Instead of buying licenses with gold, you’ll be granted one as soon as you raise the overall score of your civilisation to a certain point. In story mode, you’ll need a new license for every new planet as well. Because of this, you’ll only have a limited number of tech licenses available to you throughout a playthrough, so you’ll have to be strategic on how you use them.

On top of this, the way you decide to produce energy and use the planet’s resources also affects the state of your environment. Create too much pollution and you’ll soon be experiencing all kinds of natural disasters; provide too few resources and goods for your people and happiness might drop so low that citizens will leave your planet for a better one. While there are similar mechanics in Civilization 6 — the Earth’s temperature changing and natural disasters, for example — what makes Imagine Earth different is that it places these mechanics front and centre. Unlike other games where you might be able to let certain cities wither away in the background when it comes to energy or food consumption, Imagine Earth isn’t as forgiving: if pollution and global warming is left unaddressed, you’ll quickly see sea levels rising and your shorelines receding. Not to mention other competing corporations are also keen on claiming as much territory on the planet as possible, so expanding your territory while safeguarding the planet quickly becomes a precarious exercise. 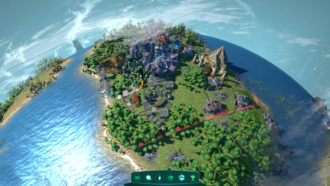 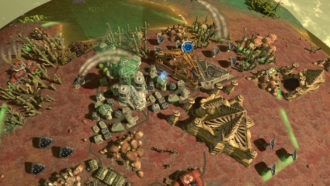 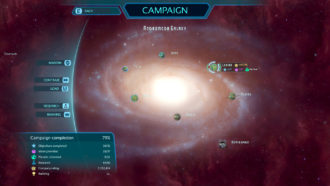 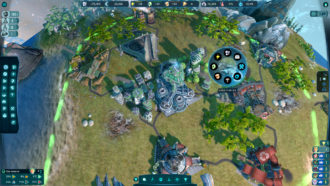 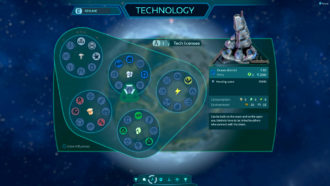 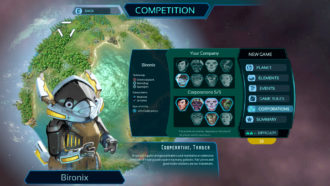 In this sense, Imagine Earth cleverly injects a dose of reality into its core gameplay. Without making the game’s story arc overly depressing, the game leans into the complexities of overpopulation, capitalism, and global warming and lets you experience these problems as quandaries that require flexible thinking in order to be solved. While this certainly makes for a nerve-wracking gameplay pace, this is what excited me most about the game; there’s a constant tension between expanding your borders — and thus needing more and more resources for an ever-growing population — and keeping your planet healthy. In this way, Imagine Earth adds depth and room for reflection to some otherwise well-known strategy game playstyles. An aggressive playstyle purely focussed on expansion may serve you well in games like Civilization or Age of Wonders, for example, but demands a lot more thought and consideration in Imagine Earth. You’ll feel the consequences of your actions very quickly, and depending on how they affect the environment, your choices can cost you the game.

Overall, Imagine Earth creates an immersive experience that forces you to reflect on your choices more than in your everyday strategy simulator. In these turbulent times, I found this a refreshing way to encourage players to think about their behaviour in relation to climate change and sustainability without defaulting to a preachy or oppressive narrative. If anything, Imagine Earth is a great example of how video games can be a tool for positive change. On top of that, it’s a fun strategy game, too.

Imagine Earth is a great strategy title with a meaningful underlying message. With original mechanics regarding natural resources, the health of your planet, and overpopulation, the game offers an immersive and thought-provoking experience that will satisfy both veteran strategy game fans and newbies alike. Its gorgeous visuals and story will be a great fit for anyone who enjoys city builders and strategy titles and is keen to try out something new.