What if DOOM Eternal was set in the Warhammer 40,000 universe? Necromunda: Hired Gun is a fast-paced first-person shooter that attempts to make this mashup game a reality. Streum On Studio offers an action-packed game with role-playing elements and a mechanical dog companion to rip and shred the gangsters of Necromunda. With middling reception on previous games E.Y.E: Divine Cybermancy and Space Hulk: Deathwing, can the developers finally deliver their ambitious promises and satisfy the fans of the tabletop world?

Players select a mercenary from 15 pre-designed looks. With a central goal to survive in this destructive hive by claiming bounties, the unnamed hired gun finds themselves twisted between House Goliath, House Escher, House Orlock, and several other rival gangs. With cybernetic augments to customise how and what you use to eliminate targets, versatility is wide with running on walls, double jumping or dashing, and a grapnel launcher in the arsenal.

A filthy and flawed world

A world polluted by ash wastes, resulting in thousands of years of heavy industry and corrupted gangs controlling territory, is a fitting setting for such a violent game. Within the hive cities that occupy the planet Necromunda, massive structures and other make-shift mechanical creations lay the environment of this setting. There are gigantic trains within seemingly endless tunnels, titan-sized mining drills and smelters, and an abundance of broken or abandoned machinery to navigate in this money-forward, dystopian underground society.

“…immense heat of gigantic flames crackling from furnaces or the level of moisture on the walls of damp underground tunnels are distinct.”

The visuals of this termite mound city are pretty impressive for a game of this stature, and despite occasional frame skipping, the game does perform well on a high-end PC. Lighting is superb, especially with RTX support. The immense heat of gigantic flames crackling from furnaces or the level of moisture on the walls of damp underground tunnels are distinct. Weapon models are excellent, and the various mods made to them set them apart. What doesn’t visually work is the characters themselves. They can look very ‘clay-like’ and the somewhat rigid animations don’t help.

While the world-building is awe-inspiring with how vicious and dirty it all feels, it cannot drive the entire story. Martyr’s End is the central hub serving as a spot to upgrade, choose new bounties, and progress the narrative. Despite their creative names, Jado, Wildsnake Priestess, Malacatcheon, and the other NPCs here are mediocre and don’t offer more than interactions for upgrades and missions. Kal Jerico, the leader who saves your character at the beginning of the game, has an established backstory in the Necromunda universe which would’ve been fascinating to explore but is belittled in this game.

Unfortunately, the problems with the boring and aimless narrative seep from the protagonist. As an unknown character in the hive, they genuinely don’t add much to the lore besides another hard-ass mercenary looking to make money to survive. There’s no development on who they are or why they are on this planet, not even any relationship building between them and the cyber-mastiff pet. There are no major decisions or role-playing elements that may influence the story to make it your own, and as such, the main character is forgettable. It’s a shame that Kal Jerico isn’t playable, as the developers would have the opportunity to delve into his history as an infamous bounty hunter and match it with the outstanding world-building. 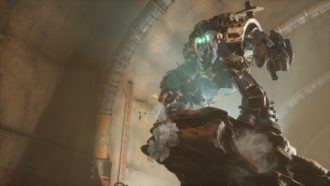 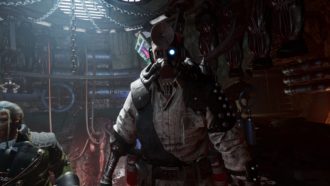 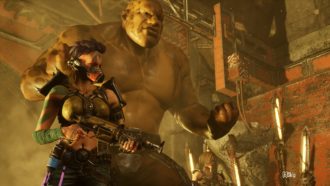 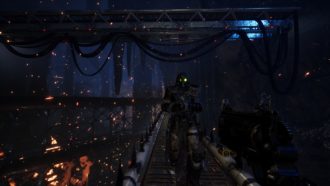 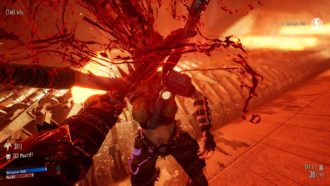 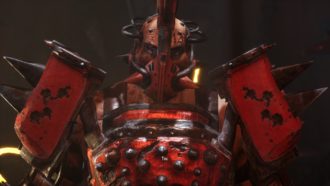 Intense action with a few misfires

Besides the main campaign, there are optional side-missions to grind and generate currency for upgrades, categorised by difficulty. They are necessary to complete, as each main mission is significantly more challenging than the last. Bounties are nothing more than bland objectives like eliminating standard enemies. Running through smaller sections of each level is a great way to explore further and learn the immersive stages, but it’s nothing more than tedious jobs to grind for upgrades.

“While the loot is a fun and satisfying way to progress and become stronger, the way it’s handled is clunky.”

Enemies will drop refractor shield regenerators, ammo, and loot consisting of equipment and weapons. The sprawling collection of guns is vast, including grenades, blades, shotguns, snipers, plasma rifles, and a few other explosive tricks. While the loot is a fun and satisfying way to progress and become stronger, the way it’s handled is clunky. When loot drops, items can’t be directly managed within an inventory besides weapons that are straight-swapped or stored. Otherwise, everything collected isn’t available until the end of the mission, where players can select which items to keep or sell. This interface itself isn’t as fluent as it should be, with a few too many clicks/presses to choose what items are worth keeping. Stat bonuses are seemingly random across the various collectable charms, meaning you have to meticulously inspect each to figure out what you may need.

Adversely, you can argue that the true star of the show is the gameplay. Necromunda is fast, dynamic, and mostly fun to play. In comparison to DOOM Eternal, movement speed is quicker and jumping is lighter, making firefights a battle of dodging rather than raw power. Players must use the world around them and their cybernetic abilities, like grappling and double-jump dashes, to defeat ambushes of enemies as facing them head-on is always a recipe for disaster.

Upgrading skills using currency can unlock impressive new tricks like shockwaves to disable shields or enhancements to the cyber-mastiff. When twenty or more mechanically monstrous enemies are charging your way, the only chance of survival is leaping from one end of the level to the other, firing away and witling down the forces before they can land enough shots on you. It’s certainly not a walk in the park on harder difficulties and does require some quick thinking in tight combat, but it’s thrilling action all the same. 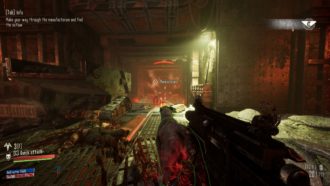 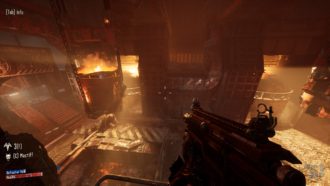 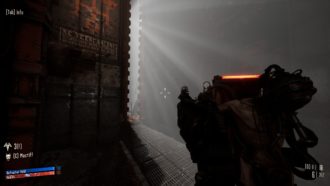 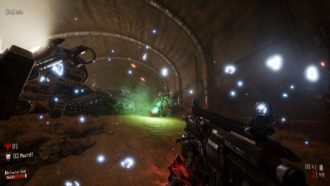 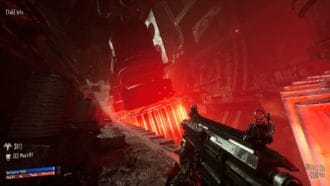 The trusty and a little bit janky cyber-mastiff needs some tuning. The dog activates on command and can distract and even kill enemies. Problem is that the dog’s AI doesn’t always work and often freezes or gets stuck on the objects in the environment. Using the mastiff also highlights enemies and friendlies with bright coloured outlines, similar to loot scattered across the world. Having all this on-screen at once is undoubtedly cumbersome and creates too much chaos with how frantic gameplay is.

“When you are supposed to be this unstoppable force of cybernetic nature, and the sounds of several rounds of a machine gun firing into a large brute are as impactful as a pen dropping, there is something clearly not right.”

When up-close with these gruesome foes, players can execute enemies for grisly takedowns. Unlike the inspiration material, they don’t flow as well as they should for many reasons. Firstly, the stiff animation makes them feel disjointed. These gory executions can be activated far enough away that the player model doesn’t properly connect with the enemy. There’s a lack of true impact that is derivative of the sound effects and reaction from enemies.

Sound effects are not crunchy or visceral enough to be effective and even firing at weak points on targets is poor. Instead of an enemy staggering or flinching, a simple “Critical Hit” message pops up. These pop-ups appear above loot as well, like ammo boxes and weapons. It distracts from the otherwise immersive world and stops Necromunda: Hired Gun from being as guttural as other FPS hits of late. Show, don’t tell.

When you are supposed to be this unstoppable force of cybernetic nature, and the sounds of several rounds of a machine gun firing into a large brute are as impactful as a pen dropping, there is something clearly not right. Outside of firefights, there is a lack of atmospheric music to back exploring stages. It’s almost dead silent, which means every single poorly mixed grunt or sound effect is front and centre. It’s not much better in fights, either. Much of the hard rock and metal instrumentals are tiresome riffs repeated with little flair or originality. Throw in something original to the universe, make it stand out above what we can find on some high school band’s demo tape.

Honestly, it doesn’t seem like the developers at Streum On Studio are improving much on feedback from their previous two projects, suffering a similar fate to the last Necromunda game. Animations are still weirdly stiff, gunplay isn’t as impactful as it should be, sound across the board is terrible, and the narrative is not fascinating in any aspect despite the compelling lore it’s backed on. There is some merit to how enjoyable the movement is in this game. The versatility of wall-running and jumping with the agility of Spider-Man with machine guns is undeniably entertaining. Traversing the excellent dark and brutal world with these abilities makes it all that much more fun. However, it’s clear there are polish and refinements required if this bounty hunter wants to make bank. Necromunda: Hired Gun is messy and not the game Warhammer 40,000 fans or FPS lovers will be speaking about in years to come.

At least you can pet the dog.