Chernobylite Review – Not as nuclear as it should be

Another Chernobyl set survival game is once more begging for your attention. No, I’m not talking about S.T.A.L.K.E.R. 2, that’s still some months away. What is at least attempting to tide you over until then is Chernobylite, a horror-action shooter developed by The Farm 51. With Alexey Sityanov on the team, who’s a game writer and story writer on the very first S.T.A.L.K.E.R. game, it’s no mistake the team is aiming for those comparisons.

Despite some decent attempts, this game makes for a hard sell in an already saturated market. Like the setting it wears on its sleeve, your time with Chernobylite teeters ever so close to doom and gloom.

An apocalyptic world, a crumbling nuclear plant and a girl in a red dress

Set thirty years after the Chernobyl tragedy, players take up the role of scientist Igor Khymynyuk, wandering the radioactive wasteland that is The Exclusion Zone. There’s a reason for your journeys in this dangerous territory. Haunted by visions of your fiancée, it’s clear she plays some role in the rumblings that are still occurring at the heart of the Chernobyl nuclear plant. Soldiers and scientists alike are invested in the alien material that has grown since the explosion. Your overarching mission becomes clear: survive in this apocalyptic hell by gathering up supplies, accumulating a party of wacky survivors and building towards a final hurrah in the game’s conclusion, hopefully rescuing the girl. It’s always about a girl, isn’t it?

I won’t go into spoilers, but both the story and character writing in the game do disappoint. While rifts between worlds gelled with a political conflict have a recipe for a good backdrop, hammy and stereotypical writing holds Chernboylite back. In your refuge, you’ll hear your companions wax poetic in ways that feel too tangential or abstract, leaving a vibe of a poor man’s Pathologic. A lot of polish is still needed for the narrative, and I’m not just talking about the typos you’ll often find in dialogue subtitles. The story boiled down still largely follows a male protagonist on a journey to save the girl. They’re all beats we’ve seen before.

“Choices you make in missions will take more effect than other games that wear the “choices matter” marketing on their sleeve.”

That isn’t to say there aren’t at least interesting attempts at storytelling devices. Choices you make in missions will take more effect than other games that wear the “choices matter” marketing on their sleeve. Wrong choices can leave members pissed off, inevitably fraughting your final mission. The way choices impact the game’s conclusion is interesting and rewarding. I just wish it was in a game that was capable of writing these decisions better and more cleverly.

Where this game largely differs from its inspiration from other games of similar settings is that it takes a heavier science-fiction tone. Sporting more than just your typical monsters, created by the nuclear explosion, the land is also plagued by an alien metal called – you guessed it – Chernobylite. What this material allows for is rifts between worlds, time travel and re-shaping of past decisions. Perhaps the most exciting in all of this is just how aesthetically intriguing the game is made by the damned stuff. Creeping through hallways of dilapidated apartment complexes, rifling through bunkers and witnessing walls ripped apart by this green, glowing material… it never got old in the fourteen or so hours I spent in-game.

This isn’t all that aids the believable world set in Chernobylite. Patrolling militants will be peppered through streets and buildings, hellbent on oppressing you and preventing you from receiving the goods and materials you so desperately need to survive. Backing all of this is a quite impressive and eerie soundtrack, ranging from droning noises in stealth sequences to twanging and tense guitar in combat.

Where its narrative and writing often lost me, I still couldn’t help but feel reeled in to witness the changing and crumbling world around me. Another way this is evoked is through the environments that you’ll undoubtedly revisit time and time again in-game. With each venture, they have the potential to change over time. What this looks like is often irradiated storms causing more rifts in the environment, teasing insights of the other ethereal world on offer.

More of this in your environment means more enemy spawns, and tougher ones. That’s all engaging on paper and another great idea in Chernobylite’s favour, but it’s hurt by the fact that the alien, mutated enemies (known as Shadows) in the game are less threatening than the military presence. Their design is quite generic and leaves a bit to be desired. They’re not so threatening, glowy gangly humanoids. That’s it. 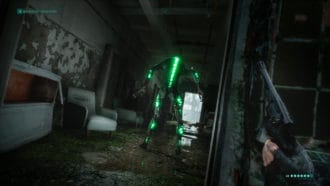 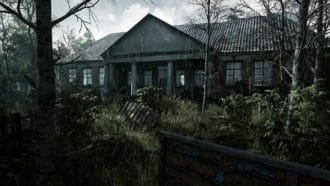 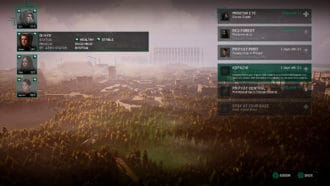 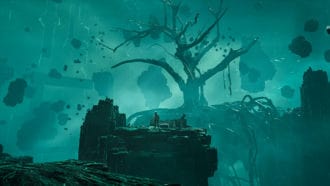 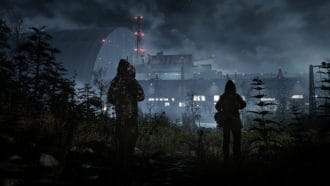 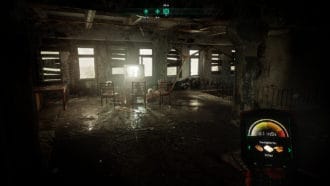 Making friends or enemies, surviving a hellscape and crafting to your heart’s intent

Chernobylite will be at least an intriguing enough entry in the genre for survival fans, even if it’s not the must-play title I so desperately wish it was. In-between missions you’ll be placed inside your shelter, an abandoned factory building. It’s here you’ll not only be provided with a view of the storm affected Pripyat ahead of you (another great example of its environment setting), but be able to pick your missions, chat with your party members to learn their backstory or acquire skills off them and engage in some good old fashioned base-building.

Base-building is thankfully a bit more minimalistic here. Characters’ comfort, power generated and food are just some of the stats you’ll need to keep track of when placing items around your hub. These are satisfied by placing the relevant item that’ll boost the stat’s levels. All your typical stuff in survival games sure, but the modesty is also something to be appreciated.

While you can craft and build items both in and out of the shelter, you’ll never be expected to build structures based on walls that just never quite snap together well (I’m looking at you Fallout 4, Valheim or just about any other survival game ever). Instead, you can just place items ever so delicately or carelessly as you like. You get out what you put in with Chernobylite’s base-building mechanic. Take enough care and you can organise and create something homely and great. Find yourself not invested in doing so? No harm done. It’s better than the alternative of being railroaded into a mechanic you don’t particularly care for.

On your journey out into varying areas of The Zone, you’ll find plenty to scavenge and discover in the several maps on offer. What will come in handy is a little electronic device that serves as an environmental analyzer. Trigger it and a pulse will be sent out, identifying resources of different types, whether it’s metal for crafting important amenities in your base, or mushrooms and herbs for healing. Other than that, there’ll be areas locked behind ores of Chernobylite that must later be destroyed, or simply doors to rooms that are locked. As simple as it is, there’s still something innately satisfying about finally having enough resources to finally unlock that door that’s been inaccessible for some time.

Also out in the zone are a plethora of merchant weirdos to find such as Evgeniy, a Slav squatting individual that blasts techno music and tries to sell you a ‘loot box,’ that is, a crate with the potential of containing either good or very bad items. All it costs is a very expensive food ration, something more scarce to come by. That’s a clever and fun joke at first, sure. However, his stereotypical schtick, like much of the game, will get old fast. That’s also not all that these ventures out into the zone can net you. While there are some thrilling opportunities to sneak into an isolated area and steal medical supplies right under military men’s noses, you can assign these tasks to your companions and instead focus on the primary missions which will net you either more narrative clues or just further progression of the main story, unlocking key party members and items for the game’s final mission.

As alluded to earlier, the main story isn’t all that enticing. However, it does facilitate some fun firefights and stealth play, and it satisfies that completionist part of your brain as you check off another box on your list of tangible things to do. I can’t begin to emphasise the tense gunplay I got stuck into in-game, swapping out my barely-holding-it-together weapons on the fly. More so, I loved the feeling of completing all the investigations, having all possible party members and gear and then entering the game’s final moments. It’s thrilling and leaves that last mission feeling as boisterous as ever.

Stepping away from Chernobylite, it’s abundantly clear that it’s not the S.T.A.L.K.E.R. style game it’s trying to be. The other thing that’s clear is that that’s actually okay. For survival fans, it’s at least a decent enough entry to blow away some hours in and enjoy the granular details of crafting, exploring and just battling the elements.

Have you ever played a game that has so many intriguing ideas that are begging to work but never quite reach that level? Chernobylite is that game for me. Never boring but never keeping me on the edge of my seat. Most of my investment here lies in the potential it shares. Donning your gear and risking your life for precious rarities may very well be worth it if you’re part of the hardcore survival fanbase and waiting on something new. If not, bunkering down and steering clear could undoubtedly do you good.