Death’s Door beautifully depicts both the mundane and not so mundane aspects of soul-reaping. You play as a crow, one of many reapers whose day-to-day tasks involve the assignment and collection of souls that have reached their expiry. But when one soul evades your grasp, you’ll find yourself going on a journey that unravels the very fabric of the soul-reaping institution. Souls beware, because this group of reaper crows is ready to earn their title as a murder.

In our preview of Death’s Door, we described the game as “a morbid mashup of Monsters, Inc. meets Dark Souls”, a sentiment that still holds true for the review build of the game. The comically bureaucratic depiction of the reaping business is so enjoyably bleak. You commute to work, punch in, get assigned your soul for reaping, watch as the crows around you fill out paperwork, then take a door that leads you to your assigned soul. The Reaping Commission Headquarters, as it’s called, serves as your hub of operations. Here you can chat to other crows, spend souls to level up certain attributes, and leap through doors that function as portals into the overworld. The Commission itself is devoid of colour, quite literally, helping to represent the rather gloomy and morbid reality of the operation. It’s also an area that doesn’t really take place in time and space as we know it, with time only marching once you make your way through a door and into the world.

The story here is one of discovery and pursuit. Your assigned soul has been taken and you’ll need to track it down because… well that’s your job. Various foes stand in your way including some large and powerful souls who have aged well beyond their expiry. Claiming these souls feels right, as if you were balancing out what was meant to be. But along the way you’ll also discover what arrangements and corruption may have lead to these souls not being claimed already.

“…by the end of the game, the entire map will be dotted with shortcuts like an oddly accommodating swiss cheese.”

Death’s Door plays a bit like a classic Zelda game, a bit like an isometric RPG, and a bit like a forgiving Dark Souls. You’ll have access to a few different types of attacks and a dodge roll as you explore the overworld and deal with the menacing critters in your way. It only takes a few hits to kill the player and force a respawn, so the timing of attacks and dodges is absolutely paramount. The world itself is full of exploration through a connected world with heaps of opportunities to create little shortcuts for yourself back to previous areas. This is crucial as progression often depends on those shortcuts helping you to get back to a deeper part of the map once you have perished and respawned. Puzzles are fairly frequent, as are secrets, and you will sometimes find obstacles that can’t be crossed until a certain skill is unlocked further into the game. I wouldn’t go so far as to call this a Metroidvania however, as these obstacles are used more to guide the player in the right direction and to allow those who are backtracking to find little secrets and rewards for their added exploration.

I do love the interconnected world design. There’s a feeling of tangibility to this world as everything links up to itself in one way or another. Yet there are never sacrifices made as to how diverse and surprising the world can get. Fans have praised Dark Souls for years in its ability to create an interconnected world and Death’s Door takes this idea and turns the frequency dial up to 11. At many points of the game, you’ll be unlocking shortcut after shortcut in ridiculously quick succession. Sure, the frequency of these shortcuts somewhat undermines the necessity of any given one and makes the moment a little less special, although I do love that by the end of the game the entire map will be dotted with shortcuts like an oddly accommodating swiss cheese.

As a person that describes themselves as directionally challenged, I will admit that at times I was a bit lost and would have definitely relied on a map if one were provided. Although with that said, I never reached a point of frustration with my geographical shortcomings, instead just taking more time to learn the lay of the land. I’m glad the game forced me to live within its world and not constantly open and close a map, as the world itself is beautiful in both its detail and simplicity. 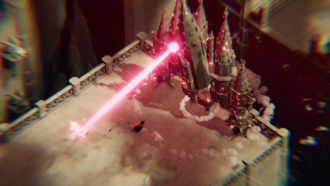 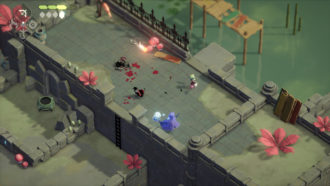 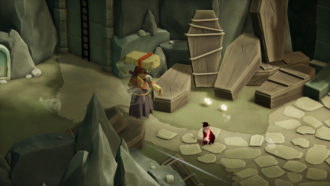 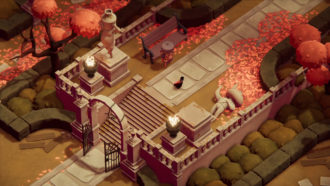 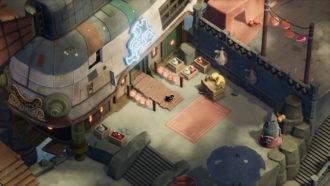 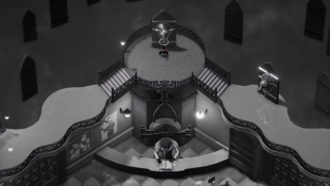 The combat found within Death’s Door is fairly straightforward and effective. A few different weapons can be found throughout the experience but they all function fairly similarly. Weapons will attack in patterns of multiple strikes with a charged attack and a rolling attack also on offer although rarely ever used (or so I found). Dodging is absolutely crucial to survival which means combat often comes down to responding to the well-telegraphed enemy attacks and good positioning. Different abilities unlock as you progress through the game too, all of which have functions both inside and outside of combat. These abilities have uses limited to an easily replenishable resource so they can’t be abused and spammed in a fight.

Sometimes you’ll find yourself fighting basic foes as you progress, sometimes you’ll be put in arenas where multiple foes spawn in waves around you, and sometimes you’ll find yourself in a boss fight arena, trembling at the intimidating foe in front of you. The boss fights were often quite engaging and inventive, even if they relied on established video game design tropes. The waves of enemies spewing from doors was probably my least favourite type of combat encounter, often feeling a little lazy, though it’s a rather minor issue in the grand scheme of things. Having more variety in the combat abilities and/or weaponry was a bit of a missed opportunity, with only a small handful of weapons to be found, none of which having a drastically different attack pattern. Although what the game does offer is totally serviceable. The game also has a terrific game over screen with the word “Death” stylistically and menacingly displayed across the screen. No seriously, it may be the best game over screen I’ve ever seen. The only time I was frustrated to see it was at one particular area in the game where small ledges and a mandated overreliance on dodge rolling meant my character was too frequently careening off the edge like an overexcited lemming. This area did feel like a slight oversight in design choices because the roll moves you a set distance that can’t be interrupted or redirected once started, and with no blocking as an option and tiny platforms as your battlefield, rolling to your death was an absolute inevitability.

Where the game undeniably thrives however is in its stylistic flair and rare depictions of humanity. The aforementioned game over screen isn’t the only small detail that stood out to me as a brilliant example of charm and pizzaz. Signposts around the world help point to areas of significance with the player able to examine the signs to bring up a readable image of the text. Attack that sign with your sword and when you go to view it you’ll only see an illegible set of words that have been sliced down the middle horizontally rendering the sign completely useless but utterly awesome. Rather than having a health bar, enemies will start to form visible cracks that grow in intensity as they decrease in health. It’s a fantastic way to represent vitality whilst still keeping information in-world. Plus it just looks really cool. You’ll also meet some really fun recurring characters along the way who are so likable and endearing and seen sparingly enough that they never feel overused. 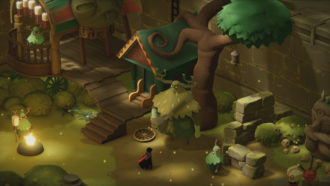 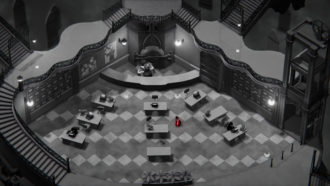 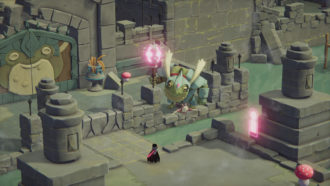 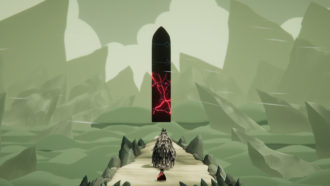 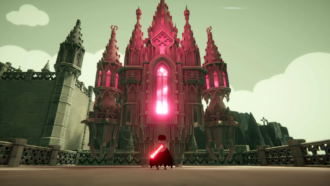 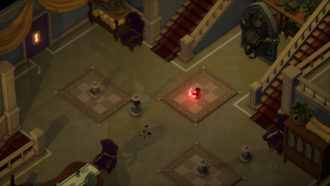 The game also features these moments of clarity and humanity peppered throughout the experience that beautifully help to balance the almost procedural task of soul-reaping and grounds the player within the world. The gravedigger, for instance, will show up after a boss fight to remind you that the big old ugly boss may have needed to be stopped, but that they’re also an important and meaningful part of the ecosystem that deserves forgiveness and will live on in our memories. It’s almost unfathomable how Death’s Door is able to juggle its playful and emotional sides so effortlessly.

“It’s almost unfathomable how Death’s Door is able to juggle its playful and emotional sides so effortlessly.”

I also have to give credit to one particular character that serves you delicious soup and gives insight into the world around you. Not only is their depiction in-game hilarious, but their words of wisdom point you to unexplored areas and secrets that would have been otherwise really hard to find. It’s a great way to give hints and encourage players to uncover all the bonus areas and secrets without dampening the discoveries themselves.

Without a doubt though, the best thing about Death’s Door is its sound design. The musical score so perfectly imbues the world with life and sets the tone of the scene. The tracks are varied and tailored to the world around you, with instruments like piano and flute bringing with them feelings of triumph, danger, hope, and melancholy. Ambient sounds like whispering help to set a mysterious mood whilst enemies animate with unsettling noises. I’ll never forget the journey to your first major boss soul when the music crescendos as the action of the game picks up. The level you’re in begins to come to life as machinery clangs and bashes around you, perfectly timing itself to the already amazing music to create a phenomenal moment of in-world and out-of-world cohesion.

It’s small moments like these that allow you to peek into Death’s Door and see the absolute passion and mastery that went into this project. A sublime experience from start to finish.

Death’s Door crashes onto the scene stylistically with an amazingly detailed, interconnected world full to the brim with personality and secrets. The game introduces great characters that bring with them charisma and humanity as it lovingly juggles both the morbid and the beautiful sides of its narrative. With simply phenomenal sound design that lovingly accompanies and amplifies the visuals and atmosphere, Death’s Door presents one door absolutely worth knocking on.