The world is black and full of cascading raindrops that fall fatly into translucent pools around you. You awaken as Lily, the protagonist of ENDER LILIES: Quietus of the Knights, in a deserted church on a funeral pyre. As you rise you won’t be able to make Lily awaken very fast, the game halts you to experience a slowness in Lily’s rise, emphasising the possibility that she has been at rest for a long time. What wakes you from your slumber is a voice, presented via text (Ender Lillies does not include voice acting) of what looks like an assassin but is called an Immortal Knight. You realise that Lily has lost her memory and this Knight is going to help you find the answers behind the ruined world of Land’s End that awaits you outside the church’s arches.

ENDER LILIES: Quietus of the Knights is a mixture of 2D platformer with RPG and dark fantasy elements. It also includes a number of Metroidvania features, which is a genre that traditionally starts players with limited access to a world map, making it a genre that revels in exploration. Ender Lilies incorporates classic elements from the genre, such as slowly providing the player with weapons and skills they need to deeply explore the game’s environment. I love this element of Metroidvanias. It always makes me smile a little when I see an area that can’t be accessed, wondering what skill or weapon is needed to dive into that area of the map.

The world you travel through as Lily is made up of dark tones and a hell of a lot of rain. Lily herself is completely white and looks fresh out of an anime, obviously designed this way to show how pure she is compared to the dark beings and scenery that surrounds her. The constant drizzle is the reason why the world of Land’s End is in its current state; the rain is cursed and has corrupted every living thing into horrific creatures called The Blighted. The rain provides the ambience when no music is playing, and for someone who is a pluviophile (a person who is comforted and energised by rainy days/nights), I loved the constant drizzling sound. The soundtrack itself is a mixture of Nintendo meets gothic fairytale, with Japanese alternative band, Mili, providing original tunes.

These tunes match the world of Land’s End perfectly, with the game’s anime style similar to that of Gosick or Sleepy Hollow. The dark fantasy setting has depictions of decayed shacks, underground water labyrinths and catacombs with skulls a mile high. As you traverse around these settings, you’ll be met with powerful enemies that will only take a few blows to send you reeling back, an animation showing you smashing into pieces. The enemies of the world are varied and come in all forms and sizes. Skeleton warriors, flame-throwing crows, and big blobby monsters will all try to get in your way and also deal a crapload of damage. There are also the “were-these-people-high-when-they-created-this” mushroom wizards that fly and let loose sparkling, damaging, purple fireworks or are grounded and let out green poisonous gas from their wands.

“The dark fantasy setting has depictions of decayed shacks, underground water labyrinths and catacombs with skulls a mile high”

Along the way you meet bosses that once beaten, or “purified”, allow you to gain their power. Once you do so, they are attached to Lily and become like her guardian spirits. Lily herself isn’t the one to attack those around her, it is the spirits and their powers that fight for you with their various skills and weapons. This element of the game kind of irked me. Lily herself is small and cowers whenever one of her spirits attacks. It kind of made me wince every time she made herself so small when being attacked and let her spirit do the attacking for her. I know that Lily’s power comes from her ability to purify and save the Blighted, so she’s the brains of the operation and not necessarily the brawn. But seeing her petrified every time something big and nasty comes her way felt too reminiscent of tropes associated with female characters that see them too weak to fight and in need of protection.

Despite these concerns, a number of her powers do admittedly come from feminine looking spirits. So it’s nice to see the trope is bucked in some ways. One of my favourite powers is that of the “Floral Sorceress” which sends a powerful tornado that throws enemies back and also depletes some of their health. These spirit powers have only a certain amount of uses per run and are able to be refilled at a “Respite” stop. From Respite locations, you can also save your progress, upgrade your weapons, restore your HP and fast travel to other Respite spots around the map. 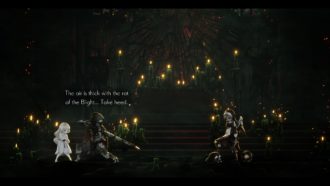 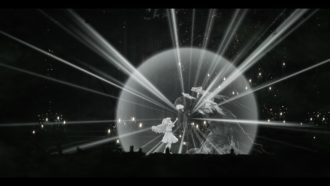 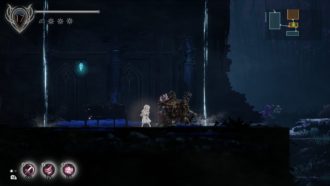 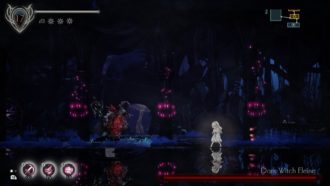 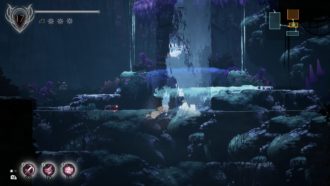 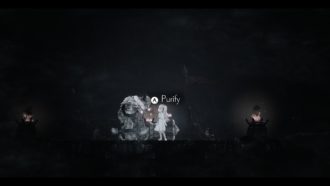 Though the game’s world is beautiful, its story is made complicated due to how bits of lore are given out sporadically throughout your time in the game. This way of dishing out lore makes the story hard to piece together and it’s part of the game that is lacking. The story could have been better executed so that the world could come alive on another level. If the player had access to further details of the world in a way that was more linear and slightly more frequent, I would have felt a deeper connection to the world that the devs have created.

As is, the lore pops up in random locations across the game’s map, which in itself is a bit of a mess. The map looks like a subway map and it’s difficult knowing exactly where you are, which can be frustrating. It’s cool how it colours in the area of the map in yellow if you have “cleared” it, but it’s hard to know which way to roam when it isn’t clear which way you need to go. This meant a lot of the time I was going around in circles when having a map that was easier to navigate could lead me to discover secret areas a lot faster.

Knowing the way is important in a game like ENDER LILIES: Quietus of the Knights as enemies can be pretty challenging. With no difficulty level, it can be a bit daunting for players who aren’t familiar or comfortable with Souls-like gameplay. I found myself going up against some bosses multiple times as only a few quick attacks from them would send me to my death. However, if you’re patient and learn what spirits to use against them, you’ll achieve their skills and therefore, have access to more of the game’s secrets. Believe me, from what I’ve uncovered of its secret paths, tunnels and enemies so far, it is very much worth your while to slaughter those bosses so that you can experience all the beauty this game has to offer.

Although it doesn’t bring many new elements to the Metroidvania table, ENDER LILIES: Quietus of the Knights kept me glued to my controller due to its gorgeous art style and its way of enticing players through exploration. The game is a bit of a contradiction – it’s relaxing yet challenging and damaged yet beautiful. Ultimately though, I very much enjoyed roaming the medieval fantasy world of Land’s End and seeing what spirits would join Lily and help her on her quest to cure The Blighted.