Last Stop Review – Some gaps to mind on this narrative ride

London definitely has a distinct vibe; a pub on every corner, black cabs, the tube. There’s also a sense of familiarity for us Aussies as English culture is so entrenched in our own. Last Stop does an amazing job of bringing that feeling of a vibrant, historical city like London to life by making the setting as rich as its narrative. For a gal’ like me, a good narrative is the cherry on top of the delicious video game sundae. So when I read that the devs behind Last Stop, Variable State, won the Writers’ Guild Award for Best Writing in a Video Game for their 2016 walking sim Virginia, I was pretty excited to check out their new narrative adventure game.

Last Stop is a sci-fi tale set in the thick of present-day (but not Covid-day!) London. The player has control of three different protagonists, each with six separate chapters. There’s Donna, a teenage person of colour who decides with her schoolmates to follow a mysterious looking man to see if he’s as strange as he looks. Meena is a spy who is working towards a promotion whilst also juggling an affair and a fractured relationship with her husband and son. And there’s John, a balding single dad who does everything for his eight-year-old daughter, Molly. Mix these everyday stories with the powers of an alien portal and you’ve got an exciting supernatural tale that works to make the mundane magical.

Last Stop follows the daily activities of our protagonists, like John walking Molly to school or Meena feeding the birds with her drug-taking dad. Though these moments are rather ordinary, the conversations that occur throughout help show the character’s motivations, fears and hang-ups. Even the chapter selection screen, which shows each character sitting next to each other on the train, captures a regular yet crucial part of life when you live in a big city – travelling from one side to the other surrounded by people who you are in some way connected with, but you may never know how.

You can play each character’s story in any order you like. I started with Donna and worked my way through her story in its entirety before moving on to the next. I’m glad I took this approach as each story brings very different themes to the table. There is the theme of the supernatural that links all the stories together, but underneath there’s a lot of everyday drama that the game makes just as exciting as its mysterious aliens and portals. At its core, Last Stop is about human connection, how we treat others and how our actions and choices can impact those around us. These more mundane ideas and concepts end up being just as powerful as any of the game’s supernatural occurrences such as a portal to another dimension that has been oozing under London. To be honest, the way humans interact and react is much more complex and deep than any alien could be anyway.

Though Meena originally has the most interesting life as a government agent, the circumstances that John and Donna find themselves in also make their stories just as interesting as any spy tale. The combination of themes such as betrayal, obsession, power and love make the character’s narratives exciting to play as they struggle to do what is right for themselves and those they care about. 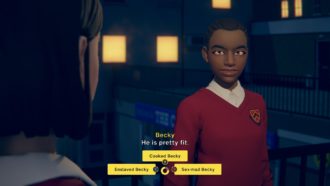 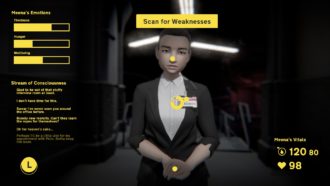 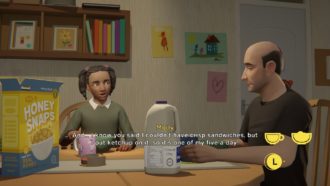 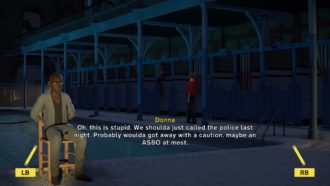 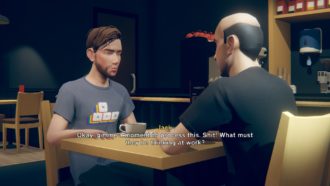 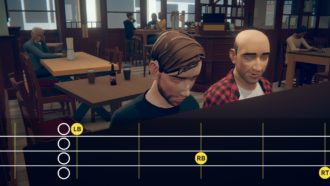 “…an exciting supernatural tale that works to make the mundane magical.”

Most of the narrative is explicit, but the game values the intelligence of its players – it provides little hints throughout that show you rather than tell you what is happening in the character’s lives. Actions such as the characters sorting through their mail, or photos around the character’s apartment, make you realise something new about your character that you wouldn’t have noticed if you hadn’t been paying attention. Also, when you are in a character’s story, you bump into different NPCs from the other story arcs and the 7 degrees of separation that keeps you guessing throughout slowly takes shape and links characters together, just like Alice’s intricate “The Chart” does on the L Word.

Gameplay is simple, with the majority of the action involving walking your character from A to B. Sometimes the game lets you brush a character’s teeth, or control the speed they run at, or memorise where certain books on a shelf should go. Sometimes, like when you can control Donna twisting an old pipe around as she walks and talks, the gameplay feels as if it was included for gameplay’s sake and not to enhance the narrative or player experience at all.

This is a game that I can see non-gamers really getting into, or a stepping stone for people who want to get into gaming but are overwhelmed by other genres. In saying that, I did yearn for a bit more autonomy for my character and the ability to explore more of the game’s world. I wanted to traverse and interact more with the colourful personal spaces of the characters, but the game wouldn’t allow me to. If I tried to venture off the beaten path, the game would not let my character move any further.

This brings me to the one thing I really didn’t like about Last Stop – the way that as soon as your character became playable after a cutscene, their eyes become dead, their body rigid and they lack any realistic body movements until a new cutscene plays out. There’s a big shift from the cutscenes, which are so lively and well-drawn, to the animations and the character models of the game proper. Going from cutscenes to gameplay is therefore quite jarring.

Whilst the game can sometimes look a little lifeless, voice acting for each character was anything but. The voice talent was very engaging and made each character, including the NPCs, come alive. Even now I can hear the distinct voices of each character in my head, which obviously is a testament to not only the actors, but Variable State’s dedication and commitment to their narrative. When your character speaks, you can usually pick from three distinct dialogue choices. Some of these are too similar, but when I went back to play a chapter again (which you can do once you completely finish the game), I noticed that picking different dialogue options would make NPCs have a slightly different reaction to your character.

In saying this, Last Stop isn’t a “choices matter” game. You can pick whatever dialogue or action and the outcome will still ultimately be the same. It is only in the final moments of the game that you have any real control over the character’s fate. You are given two paths for each character to go down which will lead to two very different endings to their story. After the strong narrative that Last Stop delivered, it was nice to be given a little bit of autonomy in their fate. This is especially true given how much these characters grow on you despite how flawed they may be as people.

Though it may alienate some players due to its lack of gameplay, Last Stop has an action-packed narrative that doesn’t get stale. It beautifully juxtaposes the mundane day-to-day life of three characters against a bizarre science-fiction story. The fantastic voice talent brings a level of charisma and life that unfortunately isn’t matched by the rather stiff in-game animations, although that doesn’t stop the game from being a fun tube ride through an alien-infested London where weird stuff happens to pretty ordinary people.