Foreclosed Review – Cyberpunk by the numbers

Imagine waking up and having your entire identity cancelled. You can’t go to work, you can’t surf the internet, you can’t purchase anything – your entire digital existence is wiped out. That’s the life of Evan Kapnos, the hero of new cyberpunk shooter Foreclosed, and he is on a mission to clear his name, reinstate himself into the city’s “blockchain”, and get his life back. Along the way, Kapnos meets a range of characters and gradually uncovers a conspiracy he must expose and overcome. Foreclosed contains all the ingredients of a good modern cyberpunk world: rundown slums, neon-lit business districts, clean and sterile corporate offices, flying cars, biohacking, and corrupt bureaucracy. Unfortunately, a game’s setting is only one piece of the puzzle.

Releasing from Antab Studio, who have previously put out a slew of arcade shooters, Foreclosed marks their first narrative-driven experience. While achieving a compelling art style and setting, the game fails to deliver anything worth digging your teeth into. Glitches, undercooked systems, and a clunky and ineffective third-person cover system makes Foreclosed a joy to look at, but a chore to actually play.

As Evan Kapnos, you will embark on a fairly short adventure to try to undo your identity foreclosure and reintegrate into society. Along the way you’ll meet a small cast of characters who will each help or hinder your mission, the standout of which is your accomplice, Dahlia. Dahlia is on a parallel quest as Kapnos; trying to reverse her company’s bankruptcy. As the game progresses, their stories become more entwined than things first seem.

Foreclosed plays out like a lot of cyberpunk-themed stories; limited face-to-face interactions in favour of radio contact made possible by the technological integration of the future. Evan Kapnos externalizes most of his thoughts, helping give the player guidance and insight into his plight. The trade-off is Foreclosed feels like quite a lonely game, with only Kapnos and the enemies he is fighting populating the majority of the experience.

Where Foreclosed excels most is in its aesthetic as a futuristic, neon-laced cyberpunk world. I found myself often walking around each area, once cleared of enemies, and checking out the tech, graffiti, and skylines. The cyberpunk aesthetic is a dime-a-dozen in gaming these days, but Foreclosed does a good job of creating a visually impressive world. This, paired with the comic book/graphic novel presentation, allows Foreclosed to stand out as one of the better-realised cyberpunk worlds of late. The perspective tricks and creative camera angles play into this comic book style exceptionally well and made playing through the game’s narrative a fairly engaging experience.

Moving around a room, the camera would zoom in on an interactable object and freeze, while another on-screen window would appear with a new gameplay frame, guiding you towards said object. This seemless blend of cinematic presentation and comic book aesthetic helped immerse me in the world further, and engage with Evan Kapnos’ quest on a deeper level. There are plenty of these moments during Foreclosed, and I hope to see this presentation style picked up by more games in the future. 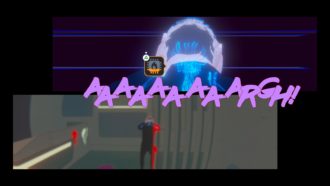 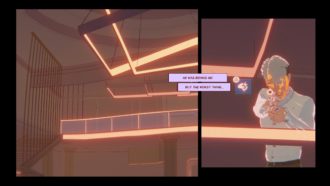 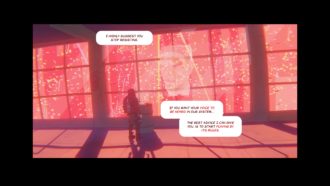 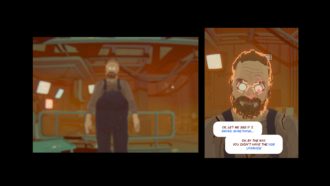 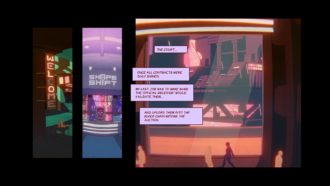 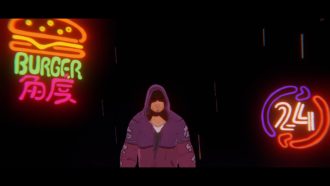 Once you go beyond the skin-deep presentation of the game, things start to fall apart. Described as a third-person action RPG, Foreclosed has a slew of underdeveloped and uncooked systems that, thankfully, go just far enough to ensure the game can be played effectively, but fail to live up to modern standards. Some examples include a lacklustre stealth system, completely inept cover-based shooting system, graphical glitches, spotty enemy AI, and opaque “RPG” progression.

The graphical glitches and faulty enemy AI stand out the most during large combat sequences. I am unsure if it was a design choice by the developers, but during combat, the screen is littered with tearing and glitches, such as asset distortion and seeing through walls completely. Enemies will appear and disappear during combat, shoot through cover, and even track Kapnos through walls even though the line-of-sight is definitely obscured.

“The system is so poorly explained, I actually completed the game without unlocking a single skill or ability”

Standing chief among the issues is the RPG progression. There is little-to-no explanation of these systems outside of a confusing XP bar and a touch-pad activated upgrade screen. The system is so poorly explained, I actually completed the game without unlocking a single skill or ability, and had to go back through chapter select to figure it out and give it a test run. This leads me to the question: what was the point? Even once unlocked and utilised, the progression and skill system is so underwhelming that it may as well not be present.

Combat feels like it was pulled from a PS2 or early PS3 shooter, with a lack of impact response, a lack of health bars on enemies or the player, and a lack of explanation on how armour, cover, or shields work. Most of Foreclosed’s engagement with the player is through combat, so not hitting the mark on this aspect proves to be a fairly crippling downfall. While I wouldn’t call it bad, it is definitely underdeveloped and leaves a lot to be desired, especially when considered with its 2020/21 peers – indie or otherwise.

The other plane of action is the game’s puzzles and hacking systems, which thankfully are fairly enjoyable and have some decent integration with both combat and exploration. During combat, you can hack explosive barrels to detonate and eliminate a group of enemies, or use your biotic implants to telepathically hurl fire extinguishers and boxes at your foes. If you’re sneaky enough, you can even take out the opposition by hacking their implants and overcharging them – frying their brains in the process.

Unfortunately for Foreclosed, the glitches, confusing systems, and undercooked game mechanics overwhelmed my experience with the game. On the surface, Antab Studio present an exciting and engaging future-noir thriller, but look much further and you will see a cyberpunk-by-the-numbers experience that falls flat. Even taking into consideration the well-realised cyberpunk world, and the clever use of comic book aesthetics to present the game’s narrative, Foreclosed fails to impress on most fronts. Gameplay is key, and unfortunately Foreclosed presents and feels like a middling shooter from decades past.