GRIME is a side-scrolling action-adventure roleplaying game developed by Clover Bite and published by Akapura Games. It sees you playing as a stone body called the vessel, as you try to survive in a strange and surreal landscape.

The first thing that struck me when booting up GRIME was its otherworldly visuals. Set in a world completely comprised of stone, the game looks like a cross between Dark Souls and a nightmarish version of Ori and the Will of the Wisps. GRIME’s beginning strikes a similarly eerie note; when you start the game, your character — a stony human-shaped body with a strange dark orb for a head — is flung to earth from a seemingly rock-filled vortex.

The core premise of GRIME is simple: survive as you progress through an increasingly hostile world. With multiple layered Metroidvania-style levels to explore, you’ll need to keep your wits about you to survive. Like many other games in the Metroidvania genre, levels are laid out in interconnected maps, and you’ll find yourself exploring the same area in a myriad of ways. There are a lot of passageways and secret tunnels to be discovered and I found uncovering pathways and shortcuts as you progress through a level to be incredibly satisfying.

The quicker you can make it back to your checkpoint to save your progress, the better, because GRIME’s combat is challenging, with plenty of unusual enemies. This variety of enemies was one of the things I enjoyed the most about the game. GRIME delivers some quirky-looking characters, varying from strange-looking hands protruding from walls, to stone trolls crawling towards you, to rock-shaped goblins chasing you as you progress through the world.

What makes these characters so memorable, in my eyes, is the game’s art and animation; every enemy is unique and incredibly detailed. For example, when you kill an enemy, it crumbles like a statue while you absorb the rubble. The animation is so beautifully executed that it made me wonder how these creatures had been turned into stone, and whether they had ever seen better days

The real showstopper in GRIME is its combat mechanics, which are challenging, unforgiving, and original. The main component you’ll need to survive a playthrough is your head: the dark orb gives you the ability to absorb enemy attacks by parrying them at the exact right moment. If your parry is successful, this will help recharge a dedicated meter at the top of your screen that, when fully charged, can be used to regenerate your health. The stronger your enemy, the more it’ll recharge the meter when killed.

“The real showstopper in GRIME is its combat mechanics.”

Aside from absorbing attacks, you also have the option to use weapons you find along the way. The game also allows you to unlock and upgrade traits, skills and abilities through a dedicated skill tree at specific checkpoints in the game called surrogates. Your choice of skills to unlock and upgrade will depend heavily on your preferred weapons and playstyle, since GRIME features weapon scaling mechanics similar to games like Dark Souls. If you enjoy an aggressive playstyle that’s centred around dealing high amounts of damage, for example, you can unlock traits that grant you specific bonuses in terms of damage or strength.

Similarly, if you prefer playing more defensively, you can unlock bonuses that allow you to dash away from enemies more quickly or evade damage. Some traits can only be unlocked once you’ve defeated and absorbed specific kinds of enemies. I found this an engaging way to make you pay attention to your environment and the enemies you come across, particularly when you’re keen to unlock specific traits that align with your playstyle preferences.

Whichever playstyle you end up choosing, be prepared to study your enemies and work out a plan of attack. Boss battles can be particularly tricky, and you’ll most likely end up dying many times over before finally figuring out a way to successfully defeat them. However, when I finally did manage to get past a particularly tough boss, it was exhilarating. The bonus you’ll get after downing a boss will reflect this achievement too: after defeating a boss you get a high amount of ardor, which will increase your XP depending on how long you can go without taking damage or being killed. The more you take damage, the more ardor you’ll lose. 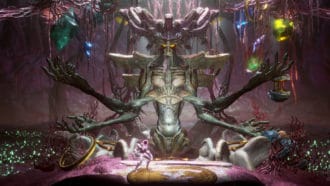 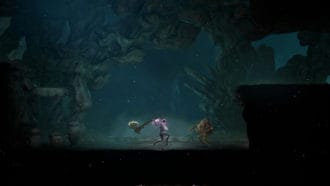 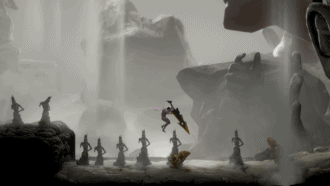 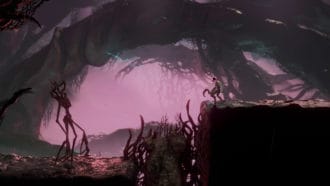 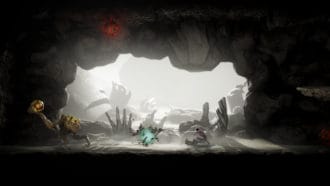 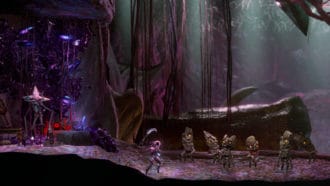 The only drawback for me was GRIME’s story, which, despite its gorgeous visuals and character design, leaves a lot open to interpretation. While the game does have some dialogue, it’s often both ambiguous and verbose. I found this unfortunate, since GRIME delivers an intriguing visual setting; it’s a shame the game’s story doesn’t offer the same level of depth and detail.

However, after only a few hours of playing GRIME, it became clear to me that the game primarily revolves around challenging its players, rather than delivering an immersive story. Its inventive mechanics easily cater to players who thrive on skill and precision when it comes to combat. While the game’s combat can feel overwhelming, and at times even a tad frustrating and unfair, GRIME’s fast-paced and addictive gameplay and big battle pay-offs more than make up for it. If you’re not afraid of a challenge or getting your hands dirty, GRIME will surely hook you in one enemy at a time.

GRIME dishes up an intriguing universe with even more intriguing enemies and bosses. While its story is on the shallow side, its original visuals and combat mechanics steal the show. However, be warned: in true souls-like fashion, GRIME’s combat is brutal and unforgiving, which might not make it a game for everyone. That said, if you’re not afraid of jumping straight into the action, the game will be just as rewarding as it is challenging. If you thrive on skill-based gameplay and enjoy titles like Dark Souls and Hades, GRIME is sure to be a good fit for your library.