Humankind is the newest game in the 4X genre, coming to us from veteran 4X developer Amplitude Studios. Its previous titles, Endless Space and Endless Legend, have been positively received, but the studio has said that they see Humankind as their magnum opus. They’ve certainly been working hard to make it so: running several Betas and working with its players for feedback and new ideas, it seems to want to reach for the skies… skies that have until now been dominated by Sid Meier’s Civilization series.

To try and compete with the titan that is the Civ games is quite a challenge, and Humankind seems to have thrown itself in the deep end by making so much of its premise and turn structure so similar. You’ll notice it as soon as you start a new game, from the top-down map to the way you accrue gold and food, and many units and buildings share similar functions too. In fact, it’s a little too similar to Civ at times – more on that later. But that similarity makes it instantly accessible to anyone with a passing familiarity with the genre to be comfortable giving it a try, which is a definite boon. And Humankind certainly has a few unique mechanics: first and foremost, you win the game by earning the most points, or ‘Fame’, not necessarily by completing a set goal like wiping everybody off the map. Fame is mainly awarded by earning ‘Era Stars’, which can be accumulated by achieving multiple different things throughout your culture’s history. But one of Humankind’s biggest standouts starts with the very first Era of the game, the Neolithic Era.

Most historical games make you pick your culture before you even begin the game. But in Humankind, you cannot pick a culture until you’ve earned your first Era Star and advanced to the Ancient Era. And upon reaching each consecutive Era, you will have the opportunity to pick an entirely new culture with different bonuses. It’s a fantastically interesting way of doing things that allows you to switch things up halfway through a game. It also creates an element of humour when you switch from the Egyptians to the Dutch. I don’t remember that in the history books!

In the Neolithic Era, you begin as a simple tribe of wandering nomads with no culture or bonuses. It’s an easier way to ease new players into the game’s systems, and it’s nice to spend a bit of time exploring the map. Some narrative events can happen in this Era, and you’ll get to choose your people’s response. This decision may have an immediate or lasting effect on your people, depending on the event. It’s a good way to get invested early.

This Neolithic Era is the all-important important stage where you can explore your surroundings to find the best spot for your capital city. In these early stages, earning your first Era Star can be by finding resources or winning battles against wild beasts or rival tribes. This is an engaging way to begin each game, and the generous 4-space movement speed of your early units is an encouragement to actually explore rather than to settle as quickly as possible.

After you earn your first star, it’s finally time to pick your culture. Since you will have familiarised yourself with your starting area, this means you can actually make an informed decision on what culture’s bonuses and abilities will work best for you. However, if you were late in earning your star, one of your rivals may have already picked the one you were gunning for. It helps to keep things fresh and adds an extra incentive to be the first to reach the next Era.

You can earn Era Stars doing pretty much anything – expanding your empire, pushing your religion, earning boatloads of cash, and more. With only three Era Stars available for each method of achievement and seven needed to reach the next Era, it’s not really possible to win by solely focusing on only one aspect of the game. I like the encouragement to focus on multiple different strengths, as it feels more true-to-life.

Another lifelike aspect that Humankind gets right is periodic interactions with your people. Every once in a while, a narrative event will strike your people and it will be up to you to make a decision. These decisions contain fun and often amusing scenarios, and your decision will affect your people’s ideology and often other aspects as well. These can result in cool bonuses, but more than that, they’re simply fun to come across. These scenarios can repeat across multiple playthroughs, though, so I expect them to lose their lustre after too long.

When it comes time to do battle, Humankind offers more strategy than its contemporaries in the genre. Not only will you need to pick your units carefully against your opponent, but you’ll need to take control of the actual battlefield. When combat starts, your troops and their opponents will be isolated from the rest of the map, along with any reinforcements you may have brought. Once battle starts, no new units can enter the ring until a victor has been declared. Then begins the deployment stage, where you can position your units to your liking before the assault begins. An auto-deployment option is available for those still learning the ropes, and you can resolve the battle instantly if you’re confident enough in your victory.

“When it comes time to do battle, Humankind offers more strategy than its contemporaries in the genre.”

With the battlefield mechanic, there’s a real sense that an epic battle is going on, rather than throwing one backup unit after another until the walls finally come crumbling down. It’s a more interesting way to do turn-based combat, and it’s faster too since, for each of your turns, you get three rounds of battlefield actions.

This is also where Humankind’s detailed map really shines. While it’s easy to appreciate the varied and beautiful terrains of the map while in peacetime, the several levels of elevations on hills and the twisting, winding mountain paths become a diabolical strategic matter. 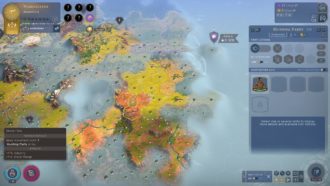 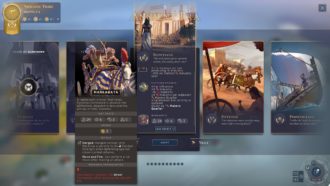 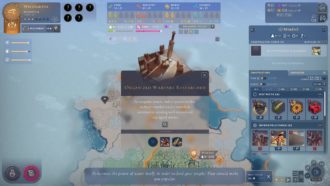 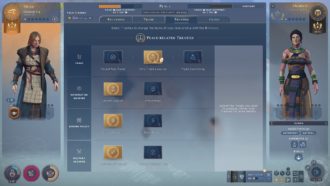 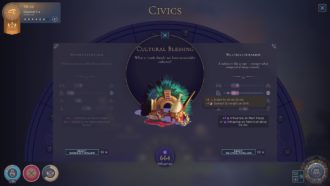 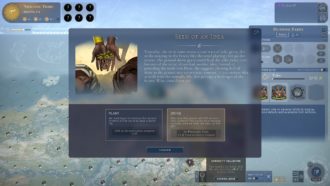 While Humankind adds a good amount of detail to many aspects, it’s lacking in some detail in others. Some of the functions that have suffered are Religion, Trading, and Diplomacy.

All three of these do exist and you do have some control over them, but take a backseat more than I’d like. Diplomacy in particular – it’s nice not to have to micromanage your trading and religion, even if it seems a little too hands-off at times. But with Diplomacy, it can get frustrating, especially when playing against AI rivals. Maybe it was just the way I played, but I had immense difficulty getting my neighbours to do anything but hate my guts. While there’s an endless number of ways to displease your rivals, there’s no real way to get them to like you beyond the handful of treaties you can offer.

The rival leaders will spout a couple of voice lines at each other when discussing trades, though their dialogue is mainly compiled of stock phrases, some of which don’t match up very well to the situation. The voice actors all sport modern American accents regardless of what culture you’re playing as, which is pretty jarring. Because your culture can and likely will change throughout the game, it’s understandably harder to design a system that would assign a relevant accent to your current culture, but it remains jarring to hear a strong American accent from an obviously non-American character model.

As is common for complex strategy games like this, there is an in-game encyclopedia that you can check anytime you need. It’s perfectly serviceable, however, the search tab only seems capable of picking up the titles of its pages and not keywords, which make it difficult to research a particular mechanic that may not have its own dedicated article. It’s lucky that this game has been in and out of beta so much – user forums have been a lifesaver.

“…all the similarities may make it hard to stand out from Civilization.”

It is incredibly difficult to avoid comparing Humankind to Sid Meier’s Civilization series, not only because it is the most well-known historical strategy game but also because of how much Humankind was clearly inspired by it. You only need to take one look at the game to see the similarities – you could quite easily fool somebody into thinking this was in fact a Civ game.

It’s not just the base concept – there are many mechanics that go beyond being able to be justified by simply sharing a genre. Some of the larger mechanics, like advancing from one era to the next and building wonders, we can expect from any example of the historical grand strategy genre. And there are plenty of ways in which Humankind implements these mechanics that differ from Civilization. But there are many ways in which they seem exactly the same, such as some buildings, like the library, that provide a bonus almost identical to the one granted in its Civilization counterpart. That’s not to say that it’s a copycat, but all the similarities may make it hard to stand out from Civilization.

The next leap for Humankind

Despite so much time responding to community feedback, there’s evidence that the game needs a bit more fine-tuning. Some cultures seem to hold a little too much advantage in certain Eras, tutorials and descriptions are occasionally not written very clearly, and I’ve noticed some small graphical bugs. None of it is game-breaking, but they are noticeable.

Amplitude Studios has already done a massive amount of work with the gaming community to get feedback and make improvements. Community engagement with 4X games tend to be very high, and they hold a lot of potential for mods. Amplitude is fostering this with their avatar creator, which allows players to create a custom leader for their Humankind games. Players can use the leaders of others as rivals, and allow their avatar to be used in turn. It’s a fun idea, though you’ll need to create a Games2Gether account to do it.

More importantly, Amplitude is poised to smother Humankind with as much love and support as it needs to flourish, which is the most encouraging thing of all. It’s obvious they plan to expand the game with new content and updates. With an in-game map editor and a promise of more modding tools to be shared, I feel confident that Humankind is only going to get better.

Humankind is immediately accessible to anybody familiar with the 4X genre, especially the Civilization series. It strays a little too close to Civilization at times, but its unique take on the advancement of culture and ideology prevents it from feeling like a copycat. The way your culture changes between eras means that no two games will ever be the same, no matter how much you try. It’s not quite as masterful as it could be and needs some fine-tuning in some areas, but it remains a solid addition to Amplitude’s library of strategy games.