King’s Bounty II is a tactical RPG developed and published by 1C Entertainment. The game is the latest entry in the King’s Bounty game franchise, and a direct successor to the first game in the series, which was originally developed by Jon van Caneghem in 1990. Blending a fantasy setting with turn-based combat, the game is set in the kingdom of Nostria. With the kingdom being threatened by dark forces, it’s up to you to save the day.

Checkpoint initially had a preview of King’s Bounty II back in July and we were already intrigued by the game then. Like other entries in the franchise, the core gameplay of King’s Bounty II consists of an overworld, where you can explore the environment and accept quests from NPCs, and turn-based battles, which take place on a hex-based grid. While battles still take place on the classic grid, the overworld’s traditional cartoonish style from earlier games has been replaced by a fully three-dimensional world. Taking cues from titles like The Witcher franchise and Skyrim, King’s Bounty II offers players a beautifully depicted world that can be explored in a non-linear fashion. Aside from the main questline, you’ll also have the option to solve both secondary and tertiary quests and gain gold, items, and units in the process.

When starting a new game, you can choose one of three characters to play as: Aivar the warrior, Elisa the paladin, or Katherine the mage. All three characters’ stories are largely the same, but the characters are each aligned to a different ideal. This ideal will influence both your available actions in quests and your character’s dialogue. There are four ideals that you can follow: power, anarchy, finesse, and order. Each of these three characters starts out with stats already geared towards a certain ideal — Aivar’s stats lean towards power, for example, while Elisa’s lean towards finesse — although their ideal is not yet locked in at this stage. Depending on the choices you make throughout your playthrough, your character’s ideal may change. There’s a catch, though: after completing several quests, your character’s ideal will be permanently locked in, which means certain quest paths and dialogue options will become unavailable to you. I thought this was a clever way to make players reflect on their character choices, and it felt like the game encouraged me to reflect further on my character’s backstory through this mechanic, too.

“The game offers a great variety of units, and the ideals system spiced things up nicely.”

Ideals can influence things on the battlefield as well. As mentioned, combat in King’s Bounty II is turn-based, and your character’s army can hold several different units at a time. Each unit also comes with an ideal that they follow, which will influence their individual morale. If you mix units with too many clashing ideals, your army’s morale will drop rapidly, which can make things difficult in battle. If a unit is particularly unhappy, for example, it may spontaneously skip a turn, but if its morale is high, you may find yourself being granted an extra turn for a unit to attack instead.

As your character gains experience by winning battles and completing quests, you will also unlock talent points. These talent points can be used in a dedicated skill tree for your character, where you can unlock traits aligning with certain ideals. Some of these traits can help mitigate an army’s morale if you’re keen on mixing lots of units, but you will have to be conscious of how you fit out your army in any case. This especially ups the stakes when it comes to losing units. In King’s Bounty II, a unit that dies in battle is gone forever. To gain new units, you’ll have to recruit new ones from dedicated recruiters, but this will cost you gold and leadership points, which means you’ll have to be careful about how and when to spend them.

You do have the option of keeping a certain number of units in reserve, but I found that I had to be conscious of my army’s balance, both in the middle of battle and when selecting units for my reserve army. You can also use magical scrolls to aid your troops in battle. These items can either be bought from merchants or received as victory rewards, and they contain a spell that can be used in battle. You’ll be able to use them in battle whenever you see fit, but once you’ve used a scroll, it’s gone for good.

Overall, I enjoyed the turn-based battles in King’s Bounty II. The game offers a great variety of units, and the ideals system spiced things up nicely. The one thing that held things back when it came to combat was the in-game UI; while in-game attack symbols are clearly laid out, I found that there was no clear indication of when it was which enemy units’ turn, and often I found myself guessing. While seasoned strategy fans will be able to figure things out quite easily, I felt like the interface could have done with a bit of extra polish, especially considering turn-based battles are such a big feature in the King’s Bounty series. 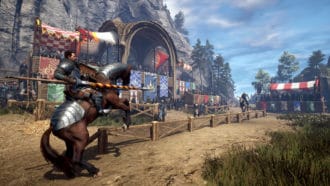 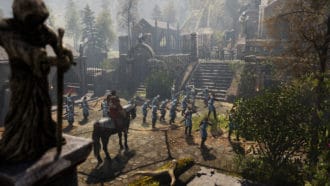 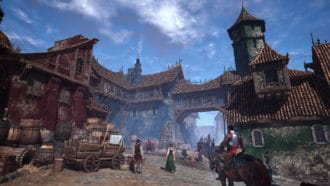 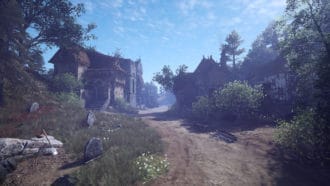 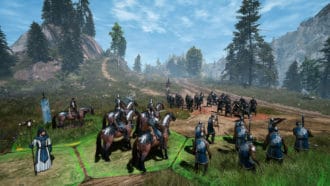 In terms of story and delivery, King’s Bounty II could have also done with a bit more time in the oven. While the world was laid out beautifully, both the story and the voice-acting were often a bit flat, with dialogue being stilted and verbose at times. And while King’s Bounty II’s world comes with many side quests, a lot of them are shallow and generic when compared to open-world giants like Skyrim or The Witcher 3. When I solved a quest that involved battling a corrupted witch to set a man free, the witch promptly vanished without a single line of dialogue after I defeated her in battle. While the character I helped out thanked me, it felt like a brief footnote to a much bigger story setup. There were a few instances where quests sparked my interest but failed to hold my attention for very long. As a result, I ended up skipping a few side quests and focussing on the main story instead, which is a shame. There are lots of side quests that are engaging — one featured a skeleton mage trying to save a cursed village, for example, and another involved lots of trolls — but mostly the quality of secondary and tertiary quests greatly varied.

What also made exploring the greater world a bit more difficult on a practical level was my character’s walking speed. Both on horseback and on foot, I found that my character moved incredibly slowly. On top of this, points of interest are spread quite far apart in the game too, which can make gameplay feel like you’re playing a long-winded walking simulator. I caught myself looking for a sprint key multiple times, only to be disappointed again and again that there wasn’t one. Luckily, there are fast travel points available in the game, which speed things up significantly, but they only become available once you’ve discovered them.

All in all, King’s Bounty II isn’t a bad game, but it just lacked polish and spark. While the strategy battles in King’s Bounty II were entertaining, they’re not the best I’ve ever played. For a series that’s so well-known for great strategy combat, perhaps it’s worth dusting off your older King’s Bounty copies first before diving into this latest one.

King’s Bounty II has all the ingredients of a great strategy game but is held back by a counterintuitive UI and generic story elements. While the overworld offers a beautiful open environment to explore, often there’s not enough there to hold your attention as a player, and you’ll find yourself wandering around aimlessly. Added to this is that your character’s travel is particularly slow, the game has a sleepy pace at times that holds the overall experience back. While its strategy battles feature some interesting ideal mechanics that might appeal to die-hard fans of the franchise, if you’re looking for a broad roleplaying strategy experience, King’s Bounty II might not be the best fit for you.