Song of Iron is a Nordic adventure from solo developer Resting Relic. It’s a short but very well-crafted side-scrolling action adventure that takes some interesting twists and turns with its gameplay and narrative, and impressed me with its gorgeous world and beauty in its simplicity. The game meshes exploration of its world with some light platforming, puzzling and a healthy dose of good ol’ Viking combat, which combined with the simple-but-effective story, makes for a captivating little adventure that doesn’t outstay its welcome.

The story of Song of Iron is intentionally minimal in terms of its presentation, but it doesn’t take long before you’re running through a town that’s burning down around you, fighting off enemies with your axe, shield and wits. There is the lingering promise of Valhalla looming, and you move on a quest to save your people through various locations, encountering some characters from Norse mythology along the way. It’s ultimately a fairly simple story without much dialogue to sink your teeth into, but there is a lot of visual storytelling that keeps things moving along. It’s no surprise that the developer references moody side-scrolling games like Limbo and Inside as his inspiration.

What is first so striking about the game is its varied and gorgeous world, which is really a joy to explore. You’re never in one setting for too long, moving from old-growth forests full of enemies with their fire torches, to deep forbidden caves full of trolls and secrets, or climbing windswept high-exposure icy mountains with a looming dragon threat off in the distance. Resting Relic also plays with silhouettes and shadows in really clever ways, sometimes with the only light coming from the literal fire in your weapon. The foreground and background is also smartly utilised with lots of little details and really capitalising on small moments, like standing on the edge of a cliff and looking at soldiers running across the landscape from a distance.

As you move through environments, you can sneak past enemies at times, but normally I found it more enjoyable to fight head-on. While initially you only have an axe and shield, you will also acquire a bow and arrow, access to other weapons like a sword and spear, along with abilities of fire and lightning to enhance your weapons. Your shield will break after a few hits, but it’s easy enough to grab another one from a fallen foe. Combat is relatively easy hack ‘n’ slash without much depth, along with the ability to block with your shield or pick off enemies before they get too close with a swift arrow to the head.

Still, it never felt super challenging, even when surrounded, as you can roll through enemies to avoid their attacks, and once you learn their patterns, they’re easily avoided. You can even run past them entirely if you’re quick enough, which at times was preferable when replaying a section. Animations are incredibly slick and satisfying across the board; I’m already looking forward to seeing some of the combat videos that will come from Song of Iron, as people begin to nail slick combos like hacking one enemy down and rolling out of the way of a second before quickly shooting an arrow into the head of a third. 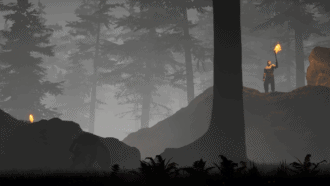 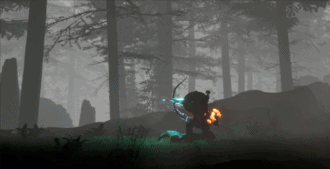 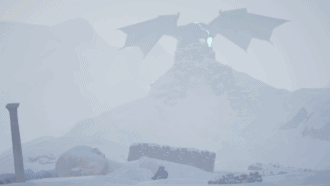 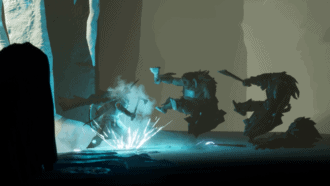 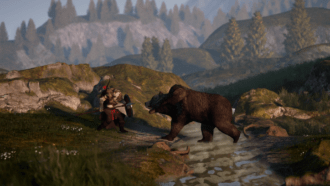 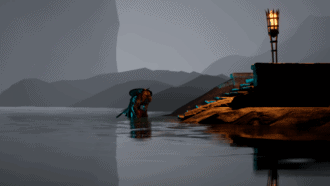 There are some simple puzzles to be solved as you progress, but they mostly amount to finding hidden switches to open doors or utilising your new abilities to access areas previously unavailable in the same space. It is a mostly linear experience, but that allows you to stay on course and prevents you from getting stuck for too long, and the new combat abilities are drip-fed in a way that I felt inspired to put them into action as soon as I acquired them, which kept the action from getting stale.

Movement is slow and methodical (until you acquire a sprint ability), which makes sense considering the burly Viking character that you play as throughout, but it doesn’t leave much flexibility in movement. Jumping can feel a little bit clunky and unprecise, which mostly isn’t a problem until you encounter a platforming section where you have to avoid giant swinging traps that kill you in one hit, sending you back to the checkpoint. Bosses can also be super-tough out of nowhere, prompting a skill-check that I often didn’t feel ready for. Combat felt like it wasn’t always malleable enough to adapt to these particularly challenging foes, but that’s mostly a small complaint given those moments of frustration are not super frequent.

I also have to applaud Song of Iron for genuinely surprising me with its story. I thought I knew exactly where the game was going as I played it, and was enjoying myself for sure in what seemed to be a narrative arc that I’d encountered before. I won’t spoil what happens, but let’s just say that the story took a sharp turn where I thought it was in cruise control, and it really made me smile. I verbally said “well played” to myself and had thoughts in my head about where the story could go next, should there be a sequel, which is tantalising to say the least.

Song of Iron is a short and sweet Nordic adventure that tells a simple story which ends up much deeper than it first seems. With a range of gorgeous environments to explore and relatively satisfying combat, it only occasionally frustrates with some tricky boss fights and clunky movement resulting in some platforming pitfalls. Still, these grievances don’t last long, as I found the world created by Resting Relic to be a stunning one to explore and very thoughtful in its style and presentation. Mostly, I’m just astonished with how great it is that a solo developer is capable of creating this wonderful little journey, and I can’t wait to see what comes next.