Ten years ago, WayForward released BloodRayne Betrayal, a 2D hack n’ slash spin-off from the usually-3D BloodRayne franchise. While the series has been mostly dormant since then, the recent PC remasters of the original BloodRayne and its sequel have led the way for BloodRayne Betrayal to also receive an updated port. Thus, we have BloodRayne Betrayal: Fresh Bites, which brings with it all-new voice acting and a re-balanced difficulty setting. Although these additions are certainly welcome, they do little to sand over more fundamental flaws in the experience.

BloodRayne Betrayal: Fresh Bites sees the half-vampire femme fatale Rayne teaming up with the vampire-hunting Brimstone Society to take down Kagan, her villainous vampire father. The Fresh Bites remaster brings back voice acting legends Laura Bailey and Troy Baker to reprise their roles as Rayne and Kagan respectively from the original games, which was a nice touch. However, the game overall is very light on story or exposition; don’t expect anyone to be especially fleshed out during the fairly brisk 4-5 hour runtime as you hack and slash your way through various castles and caves.

In terms of aesthetics, BloodRayne Betrayal: Fresh Bites is a bit of a mixed bag. The comic-book-inspired cutscenes and boss design are quite eye-catching, as are the levels for the most part. That said, while the enemy designs are all fairly distinct and adequately fearsome, the game definitely struggles with enemy variety by the end. The fact that all enemies of a specific type are outright clones of one another makes one wish the developers had opted for palette swaps or more elaborate late-game designs by the end. It becomes kind of dull once you notice that every other combat encounter seems to feature a blond dude in a blue coat and one of those yellow crawler enemies.

In terms of gameplay, BloodRayne Betrayal: Fresh Bites is quite squarely a hack n’ slash action game, with some light platforming. Not unlike the Devil May Cry franchise, the game incorporates a scoring system that rewards you based on timing, damage taken and the variety of attacks used. I found the scoring system somewhat inscrutable; no matter how many encounters I finished within the time limit, the end of the chapter would award me no points for timing.

Furthermore, BloodRayne Betrayal: Fresh Bites lacks DMC’s upgrade mechanics and varied weapon types that made mixing up your attacks such fun. That said, there is no reward for a good score aside from a letter grade, so it is perfectly fine to get by with F grades if you don’t mind the game calling you Worm Chow at the end of every chapter. 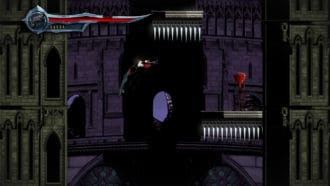 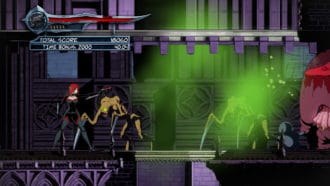 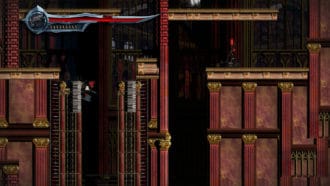 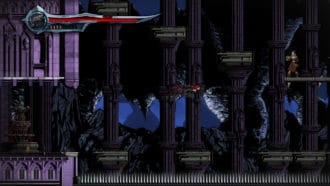 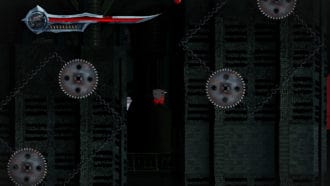 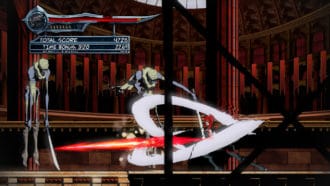 By going out of your way in levels, you can find Ancient Vampire Skulls hidden throughout the map. Collecting these allow you to upgrade Rayne’s maximum health and Magnum ammo capacity. If these collectables could be spent on a more diverse array of upgrades, like new weapons, usable items or combos, they would feel more satisfying to obtain. Despite this, they still provide a decent motivation to trawl back through completed levels to collect everything.

The combat is core to the experience in BloodRayne Betrayal: Fresh Bites. While it is serviceable, it is also rather clunky. Rayne has a variety of moves at her disposal, including arm-blade melee attacks, a powerful Magnum pistol with limited ammo, and the power to drain enemies’ blood or infect and then remotely detonate them. It all feels rather static, however; with the exception of an additional gun type and a late-game raven transformation ability, your moveset does not evolve throughout the game. Combined with the limited pool of enemies, it starts to feel pretty quickly like you are repeating the same fights over and over.

This would be excusable if Rayne felt fun to control. Unfortunately, there are many tiny annoyances with these controls that rear their heads. You cannot duck or block, which leaves the player with limited options against projectiles in some of the more cramped arenas. Instead of a more conventional double jump, Rayne’s only means of getting to high platforms is a clunky backflip that involves briefly running in the opposite direction to where you want to jump.

“…every attack received, no matter how minor, leads Rayne to dramatically fall back like a soccer player trying to get the other team in trouble.”

What’s more, Rayne is easily stunlocked; every attack received, no matter how minor, leads Rayne to dramatically fall back like a soccer player trying to get the other team in trouble. Although a quick button press when you hit the ground will get you back on your feet, the animation repeats if you’re attacked again before you land. Many late-game stages involve bottomless pits or insta-kill acid pools, leading any damage to be fatal if it causes Rayne to lose her momentum and fall down. Fortunately, checkpoints are spaced closely enough that death was generally a momentary setback rather than a massive frustration.

Even the user interface feels like it’s trying to kill you. Many enemies hide slightly offscreen, obscured by Rayne’s giant health bar while flinging projectiles at you. One late-game boss was rather annoying because Rayne would disappear behind his health bar whenever I moved to the right-hand corner of the stage. While the new “standard” difficulty setting has dialled down the original release’s notoriously murderous difficulty level, it has now been downgraded from “frustrating” to merely “workable with occasional irritating moments”. If players so desire, however, the original difficulty level can be enabled in the main menu.

While a serviceable enough and technically competent action platformer, BloodRayne Betrayal: Fresh Bites is a game from a decade ago that perhaps didn’t need to make a comeback. While the addition of voice acting and a more forgiving difficulty setting are good new features, it still doesn’t make it all that fun. There really isn’t much of a story or characterisation here for Laura Bailey’s acting to flesh out. Furthermore, while the lowered difficulty makes BloodRayne Betrayal: Fresh Bites less frustrating to get through, the simplistic combat, lack of enemy variety and clunky platforming make it hard to recommend for anyone aside from nostalgic fans of the series.