Lost in Random Review – The luck of the draw

Welcome to Random, where the single roll of a die can seal your fate. Randomness is fair, randomness is just, random rules. Lost in Random is a beautifully stylised gothic fairytale that will take you on a journey through a foreboding yet eccentrically kooky world. It’s releasing as part of EA’s Originals program, looking to deliver stellar experiences from smaller studios. Developer Zoink, known for releases such as Ghost Giant and Fe, are back and they’ve crafted what may well be their most ambitious experience yet.

Lost in Random tells the tale of separation, segregation, and the ability to overcome the insurmountable. The world of Random is divided into regions and the prosperity of Random’s citizens is decided by the roll of a die. You play as Even, born into Onecroft. It’s the slums of Random where the impoverished live amongst the junk and debris. At the age of 12, citizens are greeted by the Queen of Random who forces the child to roll a die and then takes that child away from their parents and to a new home as dictated by the roll. Even’s older sister, Odd, rolls a 6 and is taken away at the beginning of the game. What follows is an against-all-odds journey through the numerically divided regions of Random on a quest to reunite with your sister and save her from the evil Queen’s domain.

Lost in Random is at its absolute best as a visual and conceptual piece of art. The world is gorgeously detailed and enchanting, with a Tim-Burton flair giving everything a sense of mystery and unease. As Even, you’ll explore the 3D world from a third-person perspective, journeying from one distinctively different region to another. Two-Town is an unsettling town of dualities, where the townfolk snap between two inverse personalities at the roll of a die. The Mayor himself is inflicted, with his counterpart overseeing construction and ruling a second Two-Town built and flipped into the sky. Threedom is ruled by a set of three siblings all at war for the suspected murder of their father. The region is a literal warzone where a horrific “Shadowman” is said to prey on lost children in the dark alleys. It’s all very captivating and exciting, with each new area you visit offering a new opportunity to tell a peculiar story.

The characters that occupy these worlds are just as peculiar and exciting as the worlds themselves. There are so many townspeople you can chat with and a huge array of main and supporting cast members, each with their own kooky personality and design. I can’t give enough credit to the voice talent that was brought on for this release. Every character is so well realised and enjoyable. The character models are fantastically conceived, even if you see a good amount of repeats. After finishing the game and reflecting back, it’s honestly staggering how brilliant and imaginative some of the characters in Lost in Random are, how well they are designed, written, voice acted, all for a fleeting moment in a much larger story.

The world overall is just gorgeous and creative, and it made for an incredibly exciting playground for Even and her adventures. I found myself chuckling at the game’s witty writing and one-liners, with a narrator doing his part to tie the story together and keep the adventure moving forward whilst peppering in his own witty remarks or fourth-wall-breaking quips. Even herself isn’t always voice acted, and I found that a little disappointing. Cutscenes showcase Even in all her glory and personality, with a voice actor doing remarkable work in giving the character power and emotion. However, cutscenes are few and far between when compared to in-game dialogue, which allowed players to select dialogue options but never had Even actually say them out loud. I realise plenty of other games handle their dialogue this way too, but it still felt a little detaching in Lost in Random. It meant Even’s character never felt fully utilised despite being so well established. 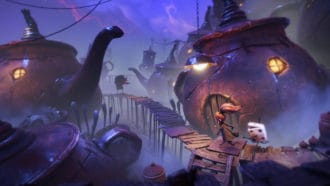 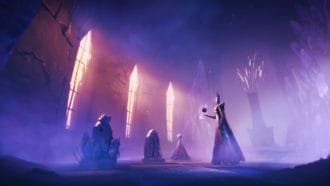 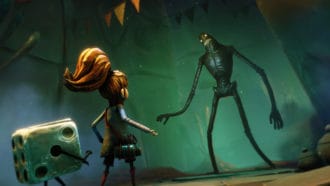 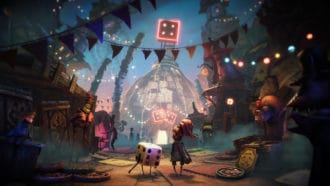 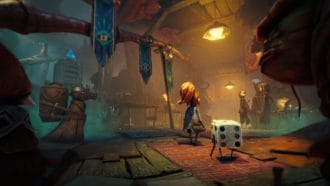 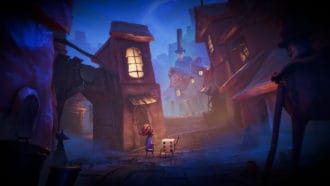 Whilst the game’s atmosphere and world was exciting, the gameplay unfortunately felt a little hit or miss with huge potential weighed down partially by awkward controls and surprisingly restrictive design. When Even isn’t out exploring the world, she’s often locked into hostile encounters that are a unique blend between hack ‘n’ slash combat and a strategy card game. It’s a fun idea, with Even and her companion Dicey accumulating cards during real-time combat and playing those cards during a pause phase that allows the player to lay out some strategy, spawn in weapons, and impact the fight. The strategy element is great and gives the combat an edge of novelty that sets it apart, whilst also tying in the thematic element of randomness. The hack ‘n’ slash element, on the other hand, is a little bit cumbersome and leaves quite a bit to be desired.

In fact, the controls of the game in general are a little bit cumbersome and leaves quite a bit to be desired. When roaming around the world you’ll run into awkwardness and restrictiveness built into the game’s design that makes the moment to moment gameplay unexciting. The sprint functionality, for instance, is mapped to the left bumper on the controller and can’t be remapped. This means you’ll have to form a claw-like grip with your left hand that causes strain if you want to run around. What makes this worse is that sprinting in the game causes Even to move with an inexplicably wide turning circle, making movement around corners frustrating. You’ll sometimes find yourself battling the supposedly free-roaming camera that at random times seems to decide you have to be looking in a specific direction and removes that control from the player. Controlling Dicey can also be such a pain and you’ll find yourself wishing your companion had better artificial intelligence and could just do more on his own. You also can’t jump in the game freely and it just makes the whole experience feel a little too restrictive for my tastes.

It’s a shame that the gameplay here doesn’t live up to the rest of the game experience, as it really does feel like the only blight on an otherwise spectacular creation. I could totally forgive the somewhat awkward controls in the free-roaming elements of the game, but once you get into combat encounters, it does start to get rather tiresome. Luckily, or perhaps cleverly, the strategy elements that are incorporated into combat almost do enough to make up for the unenjoyable real-time slashing, shooting or dodging. There’s a genuinely cool deck-building element to this game and I’m not just saying that because I like deck-building. Throughout the world you can gather resources to spend on new cards and obtain new cards from doing small side quests for random townspeople around you. It’s great because it gives a tangible reward for the small amount of exploration the game permits with its rather linear structure and means you’re constantly feeling more powerful as you unlock and begin to utilise new cards.

“It’s a shame that the gameplay here doesn’t live up to the rest of the game experience, as it really does feel like the only blight on an otherwise spectacular creation.”

Whilst admittedly more could have been done with the game’s deck-building, having that element of strategy as to which cards you’re going to bring into a battle means you can focus on the planning and distract yourself from the rough mechanical implementation of the controls. The game also takes the combat into some genuinely interesting directions, with different win conditions in certain fights that go beyond simply “kill the enemies”. At times there will be legitimate games happening whilst you fight, meaning you have to concentrate on more than one thing at a time. It does a very good job of mixing up these combat encounters and helps to partially alleviate that feeling of the combat becoming repetitive and dull.

Lost in Random definitely has some problems when it comes to its moment to moment gameplay and combat, but ultimately I don’t think it takes away from how exceptionally well crafted the rest of the experience is. I’d still easily recommend this title to most gamers because the whole thing is just worth taking in and experiencing. The game will also take you around 12-15 hours to complete on average, depending on how much of a completionist you want to be, so it’s a rather sizable experience for a narrative game made by a small team. It doesn’t overstay its welcome either, with an incredible journey constantly taking you to new and exciting places.

Lost in Random depicts a stunningly unique and eccentric world filled to the brim with character and personality. The Tim-Burton visuals and the kooky cast of characters you’ll meet in each distinctively different region means there’s never a dull moment to this journey. Clever strategy card elements help to mask the game’s rather unremarkable real-time combat, with some control issues that hurt the overall experience. Yet despite its flaws, Lost in Random still brings the goods and had me engaged from unlucky start to triumphantly random end.