There’s a new indie game on the lot and it’s finally coming into bloom after several delays. Monster Harvest lets players grow crops of varying monsters and even take them into battle. It’s a novel idea, becoming a reserved blend of Pokémon and Stardew Valley where ‘Plantimals’ grow. It seems like it should have all the makings of an indie gem, but does it break new ground as a farming simulator with a twist?

Monster Harvest feels familiar from the get-go. Being a farming simulator, it is expected that fairly early on you’ll be planting crops. That’s still the case here, except in Monster Harvest, those crops are living and breathing creatures that can be trained for battle! It’s a charming core concept that unfortunately feels a little thin narratively. Instead of a focus on story, the game allows you to work away and explore at your own pace with minimal interactions from other NPCs.

Beyond the farm that players inhabit for much of the game, there’s the town of Plantimal Point, and just past that is the entrance to the game’s dungeons. For those looking for more thrills than the dungeons can offer, there’s also a weekly battle that happens at the community recreation centre. I personally tended to avoid these battles because you run the risk of losing one of your beloved Plantimals should you fall short.

“With money comes freedom, but Monster Harvest’s unique selling point throws a spanner in the works with the inclusion of Plantimals.”

Farming simulators often perform an interesting balancing act, forcing players to choose how they spend their time since it’s a finite resource. It’s easy early on to become overwhelmed, but generally speaking, you’ll want to focus on planting crops and gradually making more and more money. With money comes freedom, but Monster Harvest’s unique selling point throws a spanner in the works with the inclusion of Plantimals. You’ll need a special slime to change a growing plant into a Plantimal, and the game is clever enough to not grant you too much of it at once. Eventually you’ll be able to buy that sweet life juice, which is why money becomes so necessary.

The Plantimals you keep in your party aren’t meant to be something you hold for long. It’s very easy to lose them in battle and once they’re defeated you need to grow a new batch. It’s a weird system that purposely makes Plantimals disposable. Players can also use them as mounts and there are other uses for Plantimals too, but the end goal always feels like it’s to grow new ones. It was pretty frustrating to have a Plantimal that was levelling well, only to have it obliterated in the dungeons and lose it forever. Not having a method to recover lost Plantimals forces players to stop themselves from developing a deep connection to the creatures, which always felt like a bit of a shame.

Compare the Monster Harvest system to that of Pokémon, where you’re able to create a team that you’re invested in because if they do faint you can revive them. Monster Harvest even rewards Plantimal death with hearts that you can use to level up the soil on your farm. This makes your harvested Plantimals a higher level but at the cost of your current companions. Your Plantimals corpses are literally used as fertilizer. 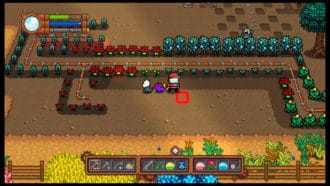 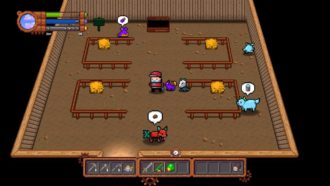 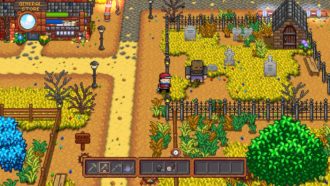 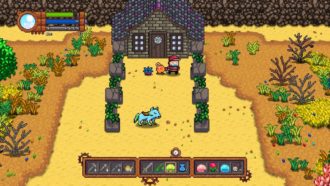 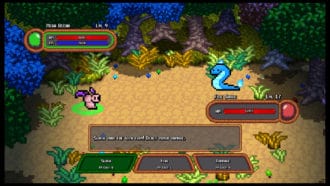 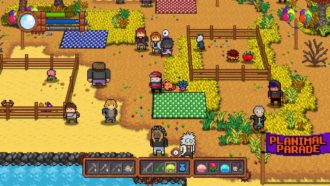 As an indie game, Monster Harvest does lay a good base with the number of Plantimals accessible to the player. For each of the three seasons, there’s 4 basic crops that can be mutated in 6 forms which are the Plantimal; Megamal, Single Crop, Multicrop, Livestock, and the Mount. All up that’s 72 possibilities from 12 different crop types. Getting each one is a moderate grind, though it becomes easier as your playthrough continues. The game also has hybrid seeds of two plant varieties, though disappointingly they aren’t able to be mutated into living Plantimals like the non-hybrids. Their only purpose is to be sold for twice the normal amount.

Once I found my feet in the game with a nice reserve of money, I began venturing into the dungeons. At first it was a fun element that allowed me to get resources such as titanium, iron, and mythic ore, but after a while it just becomes overly repetitive and boring. The dungeon grinding is only good for getting resources as well as the occasional chest of seeds and stamina items. It’s also capped depending on your stamina, so if you run out of stamina, really the only thing you can do is quit the dungeon or lose all your Plantimals in battle. It makes it rather tedious to gather the resources required, especially later in the game when you want to make cosmetic upgrades to your farm.

The game also introduces other gameplay concepts without explanation, including crucial things like irrigation. It was through trial and error that I discovered how to correctly format the system, and once I did I found my daily work evaporated for lack of a better term. This meant I had a lot of time to fill when I wasn’t planting new crops which allowed for longer trips into the dungeon and more fishing time. But one soon learns that once the crops are taken care of, there isn’t much else to do aside from those two things.

Time in Monster Harvest is totally at the control of the player. Days go for as long as the player wants them to go for, only stamina decreases as you do stuff in-game. I found there were several times when I’d go straight back to sleep just so I could move forward in the game. Honestly, this system in the game feels good, though extra notation on the passing of days and when specific events are coming would have been beneficial.

“Monster Harvest feels rather unforgiving to new players who may find themselves not playing the game in the way it expects you to.”

I found myself unable to experience one such event, the fishing event, due to not having a fishing rod when it started. I didn’t know this beforehand, but without paying to clear the path to one of the side areas of the game, you don’t receive the fishing rod and can’t participate. It seemed like the game should’ve had a contingency for players who’ve progressed in the game differently. Being a farming simulator, Monster Harvest feels rather unforgiving to new players who may find themselves not playing the game in the way it expects you to.

Monster Harvest on the Nintendo Switch at times felt like more of a chore than a pleasure. Navigating menus in TV mode was often tedious and the sensitivity of the movement around the screen feels extreme. It was also often hard to locate the correct button pathway to the exit dungeon button and sensitivity made it even harder to select (there’s also no button mapping available). When I did play it in handheld mode, the item descriptions were almost too tiny to read, but thankfully touch screen inputs were present for ease of use. Still, the game’s lack of clear signposting reared its head once again as I was sorting my inventory manually until I accidentally discovered there was a button that allowed me to quickly move items and split stacks.

The farming controls are straight forward but it still feels like it’s missing details about which buttons on the screen do what. There are some directions on the pause screen, but they aren’t helpful when you’re actually playing. The game also only allows you to alter the game settings from the main menu and there isn’t much to be altered in the first place.

It’s also hard to not mention that the game still has quite a few bugs. When I built the barn and was able to house Plantimal livestock, I would feed them hay until they were adults and began producing items. Although some invisible force prevented me from actually harvesting the goods. This was brutal considering it was quite a grind for me to reach this point of having the barn only for such a small thing to stop me from achieving more income. In other cases, NPCs were available to talk to but when engaged no conversation would trigger. This extended to critical NPCs like shopkeepers and, in a game like this, if you can’t talk to shopkeepers you can’t keep progressing. It’s sad to see these issues in the shipped game. 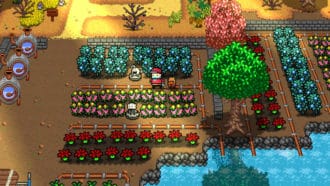 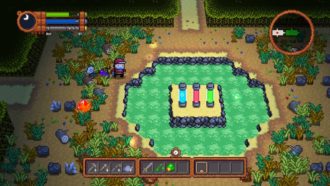 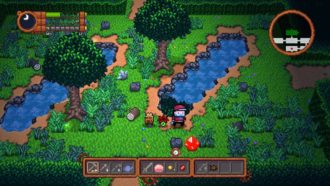 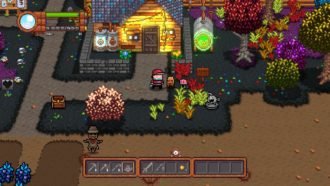 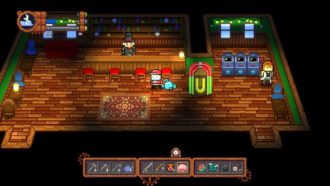 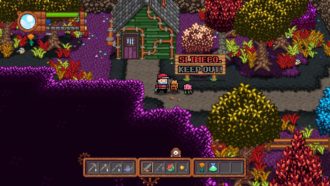 Where this game really struggles is how it defines itself from other farming simulators such as the genre great Stardew Valley. This game not only plays similarly but looks almost the same and has a relatively close narrative, so it means Monster Harvest is stuck in Stardew’s shadow. This game is brimming with potential ways to hook players but it never treads beyond safety.

While I would usually say to check this out if you’re a fan of Stardew Valley, the similarities ultimately undo this experience. Having any knowledge of the aforementioned means you come into this game with a set of expectations that Monster Harvest isn’t likely to meet. At its base, it’s a farming sim, but it lacks the peripherals and extensive customization that allows you to fully immerse yourself into the heart of the game. I think it was also pretty telling that while I was playing I’d think of Stardew Valley and wish I was playing that instead. Sometimes the grass is actually greener on the other side, even if I can’t grow monsters there. Hopefully with time Monster Harvest grows into itself more, but in order to do so, I think it needs to purposely distance itself from what has come before.

There’s a lot of potential to Monster Harvest, but it falls short on delivering a farming sim game that comes close to rivalling others in the genre. Hopefully, with time, Monster Harvest continues to grow, but until then it feels like it’s missing what makes the hard work worthwhile. Honestly, this feels like an Early Access title that still needs more time before it’s ready for full release. It seems the phrase ‘third time’s the charm’ does not apply to game delays.