Sheltered 2 Review — Managing a shelter in a brutal world

Sheltered 2 is a survival strategy game developed by Unicube Studios and published by Team17. Like its 2016 predecessor, Sheltered 2 is all about running an underground shelter in a post-apocalyptic world. Playing as the leader of a faction living in the shelter, it’s your job to ensure your people have enough food, water, and resources. As your faction’s reach grows, you’ll have to either take out all enemy factions in your territory or unite them under one single banner.

Visually, the game layout in Sheltered 2 is reminiscent of Fallout Shelter. Your hideout is represented by a set of horizontal layers on the screen, with the top one representing the world above ground, and each subsequent layer representing a level in your underground shelter. When you start the game, there’ll be three people living in the shelter: you – the faction leader – and two faction members. Similar to other strategy titles like Wasteland 3 or Pillars of Eternity, you’ll be able to customise your characters’ traits and personality to some degree before starting a game, giving them different active and passive bonuses in-game.

Once you begin a playthrough, you’ll have to make sure the needs of all three residents are looked after: instruct them to eat if they get hungry, drink if they get thirsty, and go to the bathroom when the need arises. Luckily, the game does give you the option to automate residents taking care of their personal needs, but this comes with a risk too: food, water, and resources are limited, and having your residents consume water and food automatically means you’ll have to be vigilant about your supplies.

That said, I found the ability to automate my residents’ needs a welcome feature because I had plenty of other things for them to do. To keep everything in your shelter running smoothly, you’ll need to ensure your base has the tools and equipment required to keep the shelter as liveable as possible. To gain these tools, you’ll need your faction members to gather the right resources before crafting the relevant tools or building the required machinery. If you want to expand your shelter with a new level, you’ll also need members to do the digging, build the scaffolding, and eventually complete the extra rooms. If anything breaks or needs regular maintenance, you’ll again be relying on your faction members to fix things or keep an eye on them.

To craft tools and ingredients, you’ll have to use a dedicated drafting table and crafting station. Items come with a durability value, and that value will decrease over time. Depending on the intelligence level of your faction member doing the crafting, the durability level of the crafted tool in question can vary, with higher intelligence resulting in a better durability level.

In short, there’s plenty to dive into when you start the game. While you start a playthrough with a working water purifier, for example, you’ll quickly learn that the purifier needs to be refuelled regularly to make sure there’s enough water to go around for everyone. You’ll also have to monitor the shelter’s temperature and keep things clean. Letting your shelter get dirty too quickly will mean your residents are filthy too, which, in turn, gives them a higher chance of contracting food poisoning and disease. Depending on the season, you’ll also have to ensure your shelter is adequately cooled or heated. Once winter hits, you’ll have to make sure you’ve stockpiled enough food to survive the cold.

There’s more to Sheltered 2 than just shelter maintenance. If you need more ingredients or crafting components, chances are your members will have to venture out of the shelter to get them. This is where expedition parties come in, which give you the ability to send a handful of explorers to the surface. In order to make sure they survive the dangerous journey, you’ll need to check their stats to ensure each person is physically and mentally up to the task, and you’ll equip them with weapons, water, and food. Then, you’ll need to set a destination for them on the world map — usually a searchable location like an abandoned factory or gas station — and have them bring back as much useable material as they can carry. The more parties you send out throughout the game, the more parts of the map will become visible. 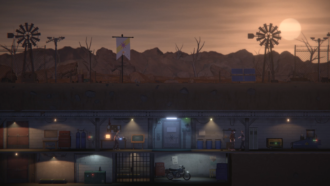 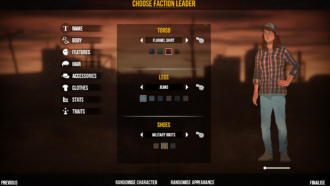 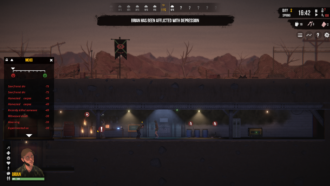 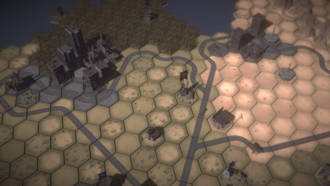 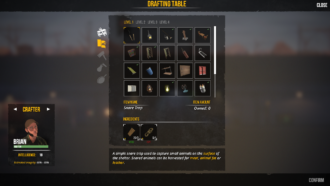 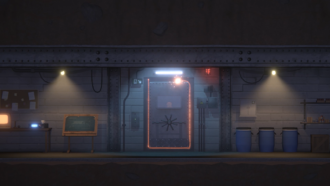 During these expeditions, you’ll inevitably run into other survivors from different factions; every location that can be explored comes with an encounter chance, indicating the likelihood of combat. Whenever this happens, you’ll have a choice: either take them on in battle, or trade resources and form an alliance if they’re other survivors. If you decide to take them on, you’ll have to fight it out in a turn-based battle. Gameplay-wise, the battles feel very similar to Wasteland or XCOM. Who gets to take the first turn in battle will depend on a character’s strength and dexterity stats, and you’ll have to think carefully about where to position each character in relation to the enemy. While I felt like Sheltered 2 didn’t reinvent the wheel when it came to combat, it did keep things interesting. It also made it feel like the stakes were high for my expedition party, in order to make it home in one piece with their gear.

As you progress through the game and meet different survivors and factions, you’ll eventually be able to complete several faction goals. Unlocking these goals will reward you with more complex recipes, different craftable items, and new abilities. While some goals are straightforward, like crafting an item, others will only unlock if you form alliances with particular factions or take them out entirely.

Overall, I found that Sheltered 2 was pretty entertaining. In its resourcing, crafting, and gathering mechanics, the game presents players with engaging conundrums. I enjoyed having to think carefully about what resources to craft and when, and who should craft them. While managing life inside my shelter could be tedious at times, I found that the expedition parties spiced things up nicely. The only thing I struggled with, especially initially, was the game’s user interface. Since it hides a lot of complexity, it’s easy to lose track of where to look for statistics and it took a while to get the hang of where everything was. While the tutorial goes some way to remediate this, it still barely scratches the surface of all aspects you’ll need to keep an eye on throughout a playthrough. It was only after playing for quite a few hours that I found myself settling into things and truly enjoying the experience.

In that sense, strategy fans who shy away from a lot of statistics and micromanagement might find Sheltered 2 a little too much. However, if you’re not deterred by a bit of micromanagement and grinding to get the hang of everything in the game, Sheltered 2 will surely offer you an interesting strategy challenge to get stuck into.

Sheltered 2 offers players an interesting mix of resourcing, crafting, and combat mechanics. With plenty of stats to keep an eye on throughout a playthrough, you’ll find yourself making complex decisions to keep your faction alive. Through the added feature of expedition parties and combat, Sheltered 2’s gameplay feels varied and engaging overall. While its user interface can be complex and overwhelming at times and its aspects of micromanagement might not be for everyone, if you’re a strategy aficionado who’s not deterred by numbers, there’s plenty to love in Sheltered 2.