A space opera about legacy, self-discovery, and identity, The Artful Escape is a masterful musical narrative adventure. Developed by Beethoven and Dinosaur and published by Annapurna Interactive, this audacious journey follows a teenage guitar prodigy who has an overwhelming reputation to live up to. Traversing levels literally out of this world, this guitar-shredding and harmonious introspective game is a milestone in story-telling. This is a spoiler-free review, which I believe is the best way to experience a game like this.

A starman waiting in the sky

Francis Vendetti is a nervous and unsure folk musician from the small town of Calypso. With ambitions for great adventures of epic quality, Francis still has tremendous expectations weighing over him. We meet the musician practising a routine acoustic number when an innate electric guitar solo uncontrollably bursts out from within. Later that night, Francis awakes to an odd sound and an unexpected friend who helps him to realise new worlds and opportunities.

“The world-building and creativity are beyond anything I’ve seen in a game… and it gets even wilder as you go on.”

In this short opening sequence to The Artful Escape, we learn a whole lot about Francis and who he isn’t. This typical folk kid is simply trying to get by, but with underlying true colours yearning to get out. Straight away, the character is relatable. Everyone can think back to a time when they felt closed-off, like they were putting on a façade or wanted to be someone they were not. It’s not unfamiliar territory in a narrative, sure. But what follows is absolutely mind-blowing.

Francis meets Lightman, a multi-dimensional musician voiced wonderfully by Carl Weathers, who takes him on a journey into worlds unknown. He gives Francis a magical guitar, which he somehow always had within him, and takes him gliding across neon pink roads against kaleidoscopic space backdrops and giant floating robots, onwards to an unimaginable club called The Cosmic Lung. Immediately, in this first thirty to forty-five minutes, The Artful Escape will have you completely mesmerised. The world-building and creativity are beyond anything I’ve seen in a game… and it gets even wilder as you go on. 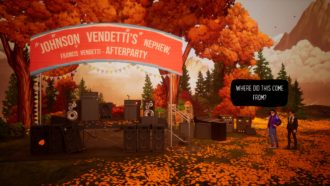 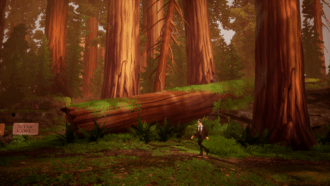 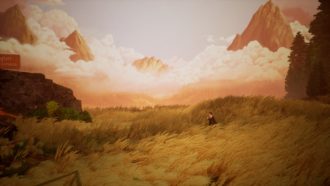 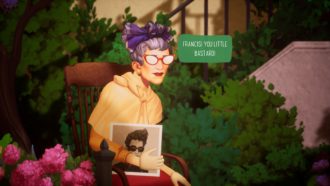 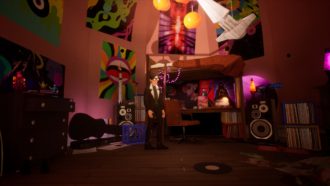 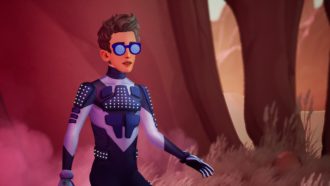 Floating in a most peculiar way

Arden Beckwith is the lead illustrator for the otherworldly backdrops. Designing such unimaginable ideas and turning them into incredibly stunning spaces is no easy feat. The animation and character work by Tessa Monash complements the environment art all so well. Everyone has this cut-out, puppet-like quality to them while moving with so much personality and smoothness. Combining all that with exceptional voices from Michael Johnston, Caroline Kinley, Jason Schwartzman, Lena Headey, and Mark Strong… this is some of the best overall character work in games. Despite all these people wearing glasses permanently, you can still sense and feel their emotions through the animation and how the world around them reacts.

By simply pressing one button, you can play elaborate guitar solos across these imaginative planes, mimicking the solo from The Darkness’ “I Believe In A Thing Called Love”. Feeling a lot like Ziggy Stardust, you can jump and strum an explosive chord, slide down hills on your knees like a rockstar, and pose a wide stance to activate platforms. As you play electrifying music, the stages around you light up along with you. Lasers shoot off into the air, creatures will rise, flowers will bloom, or lights will glow to show you the path forward. It’s all so seamless and fun that you won’t be surprised if you’re holding down the shred button the entire game.

Boss battles are a game of Simon Says, where the player needs to watch and match the button inputs on-screen. In concept, it’s not incredibly interesting or challenging. However, the audio and visual spectacle makes them worthy summits to each chapter, like the giant flying turtle and alien creature escape. You’ll have encounters with longer patterns and simultaneous button presses, which can be tricky, but these battles are generally straightforward. Regardless, they serve as a device to move the adventure on in an interactive way and don’t hinder the rest of the experience. 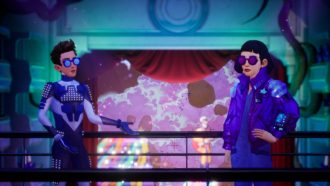 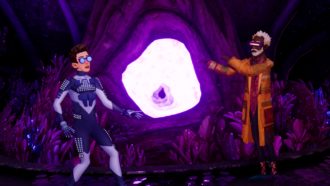 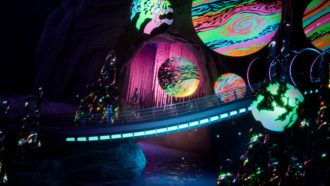 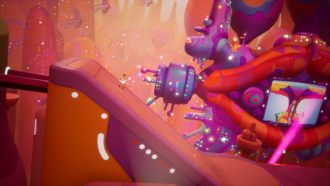 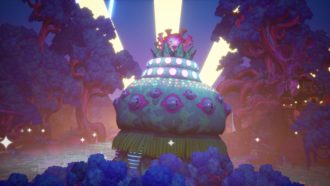 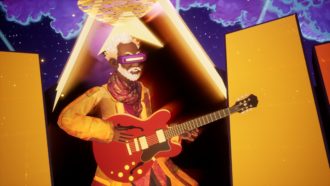 How well the guitar and background music blend is a testament to the audio design. Creative Director and musician Johnny Galvatron, composer Josh Abrahams of “Addicted to Bass” fame, and riff-master Eden Altman combine their brilliant minds to create harmony between the different tracks. Like magic, the cosmic-charged score backing each level mixed with the echoing electric guitar works so well. Galvatron told us in an interview that it works a lot like the Dark Side of the Rainbow phenomenon: the mind actually finding patterns in places it doesn’t exist. A modest comment, I think, for the impressive quality and expertise of the music and sound design of The Artful Escape.

“Like magic, the cosmic-charged score backing each level mixed with the echoing electric guitar works so well.”

Not only is the sound fantastic, but it also helps tell the story. Francis’ folk traditions linger on throughout the game despite the intense galactic shift. Elements of the more grounded music are subtly placed within the ambience of space forest trees or radios playing in the background. Even in the games’ final moments, this “entertainer from beyond our naïve concepts of reality” needs to resolve the thin strings still clinging onto other’s expectations. It delivers the weight on the character’s shoulders, and once it’s off you can genuinely sense the freedom and confidence build and unleash.

Francis crafts a new persona throughout the adventure, and you’ll be able to add your own twist to the legendary musician you’re about to become. Dialogue options provide opportunities to build a fictional backstory, like commanding the Heavy Metal Light Brigade or choosing a home planet known for occupying a time-rift where nothing is ever where you left it. You’ll be able to name your character and make them your own. Coincidentally enough, I named mine “The Wild Stallion”. Each time the custom name is announced a sound effect eerily similar to the signature Bill and Ted riff plays. Just one of many cherries on top of the creativity and fun. 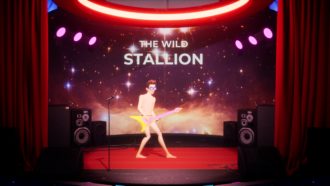 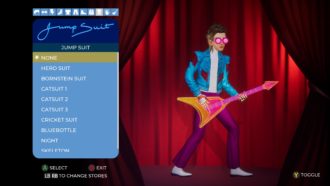 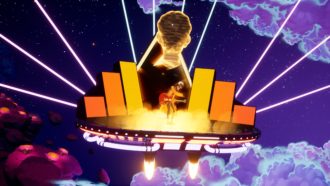 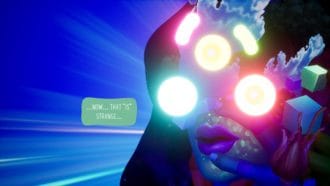 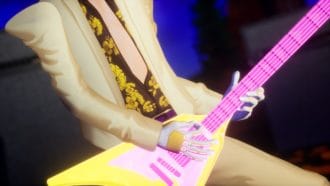 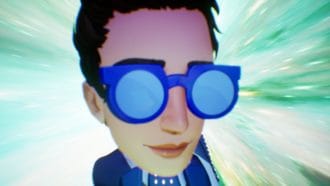 All that is gone and all that’s to come

Further into the story, Francis completes the transition into a new self with an outfit customising section. The options here are pretty broad, with heaps of hair, glasses, clothes, suits, and more to mess around with and design a great look. You can turn Francis into a corpse paint wearing death metal guitarist or into a star-studded, groovy disco icon. The options are nearly endless with the variety on offer.

Personalisation is a fun addition, but it serves such a deeper purpose. At this point, the parallels to social issues with sexuality, gender, and identity are undeniable. I can’t help but feel many can and will find a lot of themselves within The Artful Escape and Francis’ journey. Renaming yourself, changing your look, making your own story so you can be who you want to be – it’s an important message to people that no matter who you are, you can reinvent yourself and feel empowered.

These aren’t the only challenging topics and lessons learnt throughout the narrative. Besides those mentioned above, the game touches on betrayal, narcissism, coming of age, imagination, fame, and affirmation. While this isn’t an exhaustive list, it’s clear that The Artful Escape is a contemplative artwork packaged in a bewildering gameplay experience by design. Many games try to do this, but Beethoven and Dinosaur get the balance right.

The Artful Escape is a story about legacies, finding yourself, change and transition that presents itself in such an ingenious way that all can absolutely enjoy it. Gliding across the cosmos, playing electric guitar in unknown lands, and eventually vanquishing a divine complication with intricate audio design and superb music to accompany – it’s perplexing how captivating this interstellar adventure is. Inviting players on a musical journey through cosmic realms and challenging introspection, The Artful Escape is a masterpiece.