WarioWare: Get it Together! Review – That rascal’s at it again

As much as it’s great to see video games become big, expansive experiences that last 50+ hours, it’s always nice to return to a delightfully simple game like WarioWare. It’s a series that specialises in microgames – games so short that they can’t even be called minigames. This is its own form of comedy, as the player only has a matter of seconds to figure out what they’re looking at, let alone how to win the microgame. Wario is the perfect face for this silly type of setup, turning an already funny premise from good to great with his Wario-style humour. WarioWare: Get it Together! is the newest offering of the series, and while the calibre of its minigames is as good as ever, some of its new ideas don’t quite land.

Wario and his friends have created a video game, but a glitch within the code sucks them all inside the console and they must play each of the levels to iron out those pesky glitches if they are to return home. Like WarioWare games before it, each level consists of a collection of themed microgames, which the player must overcome to progress to the next. These themes consist of sports, nature, food, and more. There are over 200 of these microgames in all.

WarioWare: Get it Together’s unique feature is that the player plays each microgame while controlling actual characters that you can see on screen. You begin with just Wario, but as you play through the story mode, you quickly unlock a cast of returning characters from previous WarioWare games like Mona, 9 Volt, and Jimmy T. Like previous games, each new character is introduced with a collection of microgames all of their own. But it’s a little disappointing to see that there’s less in the way of side stories for each of these characters than usual.

The story of WarioWare titles are always bare-bones, and that’s okay. It’s hardly the reason we play them – they’re only there as a brief premise to justify why the microgames are taking place. But these brief scenes provide great comic relief and is a real part of the charm of the series. While it’s not completely gone from Get it Together, other titles have done it better. WarioWare Gold, which was released in 2018 for the 3DS, had a far more amusing premise, more side stories starring the characters, and more voice acting to boot. 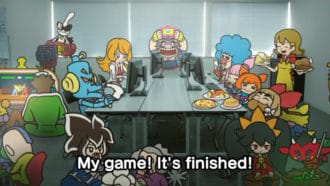 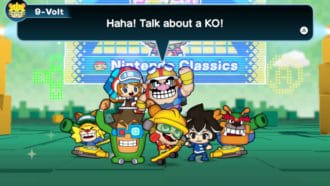 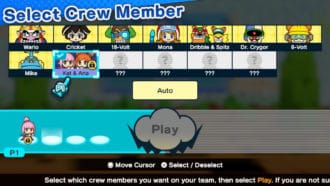 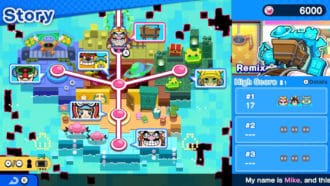 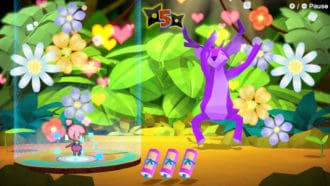 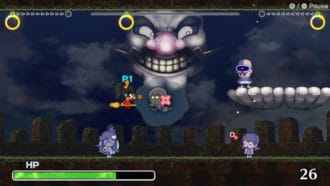 The microgames themselves are as top-notch as ever. There’s a great mix of concepts, some simple like lighting candles and some wacky like escaping a trash compactor. The sense of humour in these microgames is fantastic and always gets a laugh from me. My favourites are the Nintendo classic games, which are all themed around both retro and recent Nintendo titles. Likewise, the visuals are excellent, carrying the energetic goofiness the series is known for. There is many an earworm to be found in the game’s bouncy soundtrack too.

You can play the story mode with one or two players using local Co-Op. The Co-Op, while fun, gets chaotic very quickly and can actually be harder than in single player. With both of you gunning for the goal and no time to strategise, it’s very easy to sabotage yourselves. That in itself can be part of the fun, but it may cause annoyance in equal measure. I would have preferred to see a versus mode where you could square off against a friend to see who could last the longest.

The real fly in the ointment is the way in which each character is controlled. When going into each level, you must select from not one but several of the 15+  characters, who each control differently. More specifically, they are limited in different ways.

Some characters are constantly moving, or constantly bouncing. Some cannot jump, or can only jump. Some can only attack in a single direction. And some can move in any direction at all, but are much slower or have a weaker attack. You will cycle between these characters with each microgame, and do not have the option to stick with a single character. It adds a chaotic factor to the microgames, but not one that is on the whole positive. 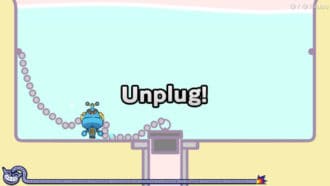 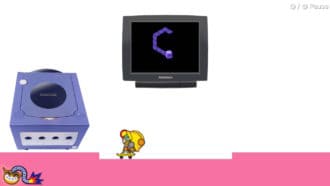 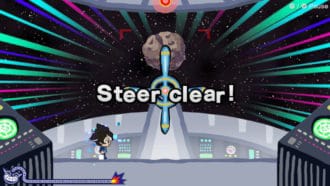 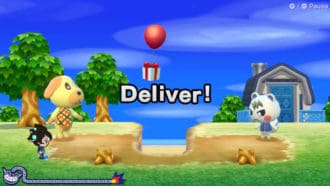 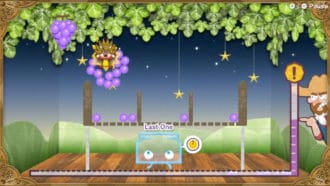 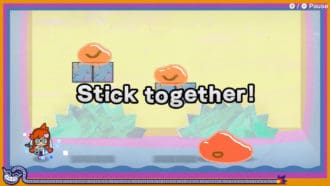 “…It adds a chaotic factor to the microgames, but not one that is on the whole positive.”

WarioWare controlled like a dream on the Wii and DS family because those consoles featured an intuitive control scheme that was incredibly easy to learn and use. Despite the Wii’s infamous reputation for unreliable motion controls, in games like WarioWare it worked beautifully since the motion you were required to perform was always simple and hard to mess up once you got the hang of it. But the Nintendo Switch does not have anything so simple as a stylus or Wiimote, and it can’t even make use of the Joy-Con’s gyro capabilities for fear of alienating those with a Switch Lite. So what’s the result? Get it Together tries to go in the exact opposite direction, making the controls more complicated, not less.

When you are only given a handful of seconds to complete a microgame, you never want to fail it because you were forced to grapple with unwieldy controls. And although the character’s abilities are not hard to understand, some of them are simply more trouble than they are worth. Thankfully, after playing through the story you have more freedom in which characters you use and it is easy to ignore the annoying ones. And the more you play, the more you will get used to each control scheme, so the switching becomes less of an issue; but it was still a misguided choice to bring to a Warioware title.

When you’re done playing through the main story levels, there are plenty of extra games for up to 4 people to jump into. A surprising number, actually. Not all of the games are winners, but there are enough genuinely fun multiplayer games that mix up the format of the microgames that it’s worth your while. Many still utilize the microgames, but add enough of their own unique flavour that they avoid feeling like a re-tread of the single-player content.

Despite some grievances with the control scheme, WarioWare: Get it Together! is still a worthwhile addition to your Switch library if you’re looking for something lighthearted and gameplay-focused to take your mind off things.

WarioWare: Get it Together! has some of the best microgames in the series, all of which carry on the zany heart of the WarioWare franchise. The multiplayer modes and weekly challenges add a lot of replayability, making it great for killing a few minutes with friends. But when it comes to adding its own twist to the series, Get it Together‘s constant switching out of characters just doesn’t mesh well with the WarioWare formula that we know and love. That, along with the disappointing lack of much of the comedic dialogue we’ve seen from previous games, hold it back from being Wario’s best. But it still promises a fun time whenever you have a few minutes to spare.