A Juggler’s Tale Review – Puppet on a string

🎵 A Juggler’s Tale I must say deals, 🎵
🎵 An emotional bullet hitting the feels… 🎵

Ah sorry, I’ll stop there; I was literally just inspired by the lyrical majesty of A Juggler’s Tale’s narrator, who is quick-witted and makes a rhyme every time (see what I did there?!). He is one of the highlights of this puzzler sidescroller that has a lot to wax lyrical about… but don’t worry, I wouldn’t do that to you again!

A Juggler’s Tale is the story of little Abby, who lives in a world of marionettes just like her. The narrative and the world around her is inspired by the German fairy tales developer kaleidoscube grew up with; but Abby’s story is far from a stereotypical, sugar-coated Disney fairy tale. Instead, its flavour is more nestled in the children’s stories of Hans Christian Anderson, y’know, the guy who wrote the original Little Mermaid which had Ariel dealing with immense physical and psychological trauma as soon as she becomes human? Old Hans didn’t believe in the “spoon full of sugar” fairy tales that Disney became famous for, and though kaleidoscube’s world is nowhere near as dark, it also isn’t filled with wide-eyed narrators and cutesy cuddly characters.

Abby’s story starts pretty dismally – she’s a juggler in a performer’s travelling act but we soon find out that she’s actually been held prisoner by a rake thin moustached top-hat villain who, through the narrator’s words, is depicted as spiteful and cruel. However, unlike the fairy tales I grew up with as a kid, Abby doesn’t wait around like Cinderella for a glass slipper or Belle for a Beast and a dose of Stockholm Syndrome, no, she takes matters into her own hands and saves herself. So starts the journey of Abby and her plight to be free of the strings that bind her.

These strings are a massive part of the way the player interacts with the world, which is filled with tiny towns and woods that remind me of the environment Hansel and Gretel would have found themselves lost in. Being tied down by these white strings that are attached to Abby’s arms, legs and head and seem to have no end in the space above her, causes her to be unable to traverse forward without first figuring out the puzzle at hand. This usually involves the player moving objects in certain patterns to make room for the puppet protagonist in all her stringed glory.

The puzzles don’t just see you moving things around however, they can also be about manipulating elements of the environment around you, such as keeping a torch lit whilst it rains so that you can singe trees to pass by. Where the puzzles get really interesting however is when you are being chased by the antagonist, the hunter Tonda, who has been hired by your ex captor to bring you back to him. Tonda is a dude with bulging biceps who seems to have missed leg day and wears a helmet adorned with antlers. 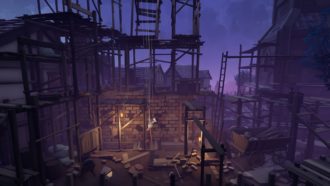 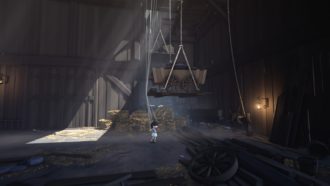 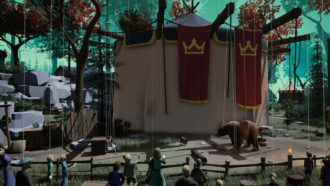 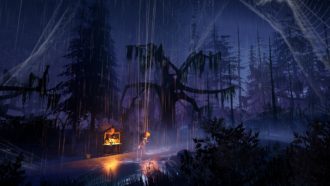 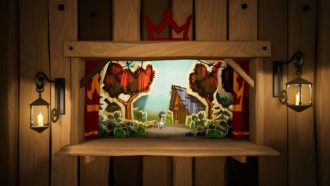 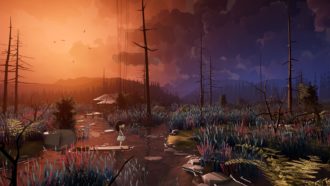 “Abby doesn’t wait around like Cinderella… she takes matters into her own hands and saves herself.”

Even though Tonda may look comical, he isn’t one to mess around with. If his beefy arms catch you around your scrawny waist, the scene ends and you restart from the last checkpoint. However, seeing as Tonda usually chases Abby through some pretty complicated terrain, you actually have to respawn a few times to get a flow for what lies ahead. I really valued this gameplay decision as it added an extra layer of urgency and discovery to the way Abby interacts with puzzles.

The puppet mechanics themselves are pretty fun to play around with, especially as the Switch controllers vibrate to simulate the feeling of restraint after Abby’s strings brush against an object. This really added to that feeling of being restrained, allowing the player to fall in love with Abby and her courage to escape the many ways she is symbolically a prisoner in this world.

One gameplay element that I didn’t love however was the throwing mechanic. This was clunky and made me grumble a bit every time I knew I had to use it to solve a puzzle.

Another element that was frustrating was the game’s lighting. I set the Switch’s brightness to the very highest setting and still the darkest parts of the game were way too dark. This meant that in some scenes where I was being chased, I couldn’t tell if there were objects in the way. This also made me make frustrated noises as I respawned and tried to move even closer to the light in my living room. Really though, the disparity in lighting in certain areas is concerning for visually impaired players, so hopefully an update will have it sorted soon.

The rhyming narrative and unreliable narrator, the Germanic wilderness fairy tale world that kaleidoscube let the player explore, as well as the cute yet strong and courageous Abby all created an atmospheric indie that kept me smiling and “awww”-ing through the majority of my time with it. It perfectly balances elements of joy with moments of turmoil that reflects the reality of the sweet and bitter elements of life.

A Juggler’s Tale isn’t a long game, it will only take you a few hours to complete. However, its length is refreshing in a time where we are surrounded by massive open-world games that can leave us exhausted just by looking at their playtime. Abby is a joy to play as, and though she doesn’t say a word and is sometimes taunted by the narrator, her story resonates through the way she survives and thrives in a world that wants to keep her grounded and tied up. The way that you can literally feel the weight in her strings adds a layer of empathy for the protagonist and makes you realise how strong-willed she really is. Though she is small in stature and doesn’t look like she’d be strong, this puppet’s tale will make you realise that strength comes in all sizes, even in the shape of a little marionette whose only real talent is juggling.