No other franchise quite nails the “big violent playground of chaos” vibes quite like Far Cry. It’s one of my favourites of the various Ubisoft open-world templates, providing an endlessly satisfying adventure that has you galivanting about a massive island, causing explosions and slowly capturing piece after piece while completing various enticing treasure hunts, hunting expeditions, races and more. With a likeable protagonist and an interesting narrative that sucks you in and gives you characters to truly fight for, it also offers a gigantic map to explore and plenty to do. Far Cry 6 is, in many ways, the best Far Cry experience so far.

Playing as revolutionary guerilla Dani Rojas (who you can choose to be male or female), Far Cry 6 is set in the tropical nation of Yara, heavily inspired by Cuba. And so the familiar story goes, a corrupt leader who rules by dictatorship is running the show, but by using a life-changing form of cancer treatment to justify his horrific actions. As Dani, you’ll join Libertad, a resistance group eager to give control of Yara back to its people.

What makes the story this time around feel different is the decision to actually have cutscenes featuring Dani, with full motion capture. Previously, Far Cry only had cutscenes from the first-person perspective of the protagonist, which meant that you quite literally only ever saw what was in front of you, which made those games feel intimate but also limited the narrative in other ways. Here, Dani has a presence. Fully voice acted, motion-captured, incredibly likeable and witty to boot, I appreciated getting to know Dani throughout the adventure and felt more connected to Libertad because of it.

Not only this, but all of the main characters are easy to root for, making for the most memorable Far Cry cast ever pulled together. Juan is like the crazy drunk uncle I never knew I needed, with his love of weaponry and cocky personality a true standout from the moment you meet him. Clara is great as a steely leader fighting for what’s right. Each main area is “run” by a different group, and I enjoyed my time completing missions for each of them, convincing them to join Libertad while learning a lot about them along the way, just as much as I enjoyed taking down their villainous, loathsome counterparts.

“…Esposito bringing a real sense of gravitas to the role as key antagonist.”

They’re all anchored by the big addition of the endlessly talented Giancarlo Esposito as the ruthless and driven Antón Castillo. Far Cry is known for its villains, and Castillo is no exception, with Esposito bringing a real sense of gravitas to the role as key antagonist. While you won’t cross paths with him very often as Dani, the opportunity to utilize him certainly isn’t wasted, with cut-scenes interjecting as you progress to give you further insight into his methods and personality. You’ll get updates on him and his relationship with his son, Diego, regularly. Their dynamic and how they interact with one another is at times enthralling; I feel like I know more about Castillo than I ever knew about Pagan Min, Joseph Seed or Vaas Montenegro, which made chipping away at his empire all the more satisfying.

Where the narrative stumbles slightly are in its broad strokes approach in the tackling of serious issues. Fascism, slavery and martial law are not small subjects to throw around, but Far Cry 6 doesn’t really offer any new or complex perspective on these issues. They’re bad. We know they’re bad, and we kill all the people that are doing the bad things and they’re not much more than a handy vehicle to get you from one mission to the next. It’s the kind of black and white storytelling that is made all the more shrug-worthy by quotes from Ubisoft like “we don’t want to make a political statement”.

On the other hand, Far Cry 6 includes a trans man as a key character (and was cast as a trans man IRL) that is handled, in my opinion at least, pretty well. They kind of do the trope of talking about the fact that they are trans early on once you meet them, but it’s necessary from the perspective that trans people (and other members of the LGBTQIA+ community) are treated like garbage in Yara, fueling his desire to want to get out. There are some heated moments where some bad, potentially triggering, things are said in context, but overall, it’s just nice to see an effort being made to include diversity. (I’m a cis man so would love to hear the perspective from any trans readers out there after they’ve played). 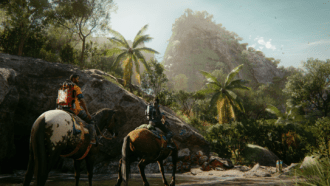 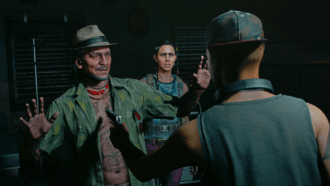 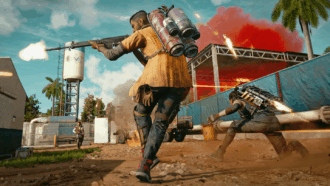 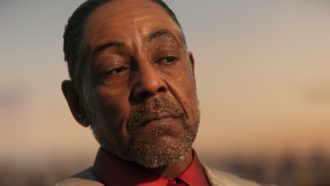 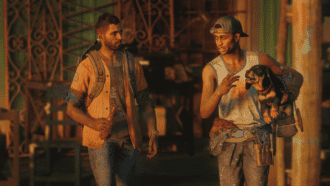 The map in Far Cry 6 is easily the biggest so far, and the sandbox open-world DNA of the game remains exactly the same in that sense. Main missions keep the story tracking and Yaran Stories have you working with some other interesting and fun characters who all have their own personal beef with Castillo’s empire. These tasks are all varied and rarely have you doing one thing for too long; one has you stealing a tank, bringing it to an artist so they can make it into a roving artwork, before using it to blow up propaganda billboards. Then you might go on a tour, searching for specific hidden landmarks with only the photos on your phone as a reference point. Another has you activating signal towers to help with a radio broadcast.

Beyond the main missions that push forward the story, there are many other activities to complete as well – it wouldn’t be Far Cry without a truckload of things to do. There’s the trademark Checkpoints and Strongholds that need to be taken over, providing you with fast travel points and supplies, which are a staple of the series and remain as enjoyable as ever to gain control of, whether it be via stealth or an all-guns-blazing approach.

Rather than climbing a tower to get the lay of the land, you’ll instead gather intel from posters, documents or just chatting with folk on the island to find out where points of interest are. Some soldiers are willing to give you information, too, if you approach them with your weapon holstered. It’s refreshing not to just be shot at on sight all the time. There are races, supply drops to find, hidden collectables, and my favourite, treasure hunts. These are the most unique mini-stories in the game; one had me searching an eerie, haunted cave, while another had me solving a love story between a man and a crocodile. As far as puzzle-based or platforming diversions go, these are some of the silliest and strongest. 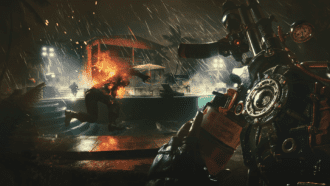 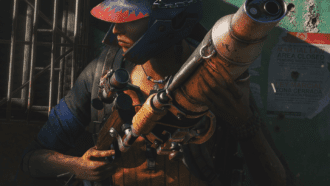 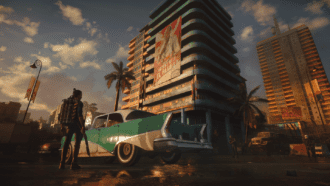 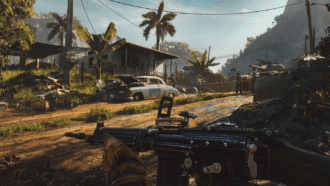 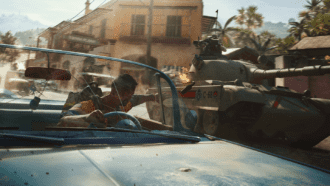 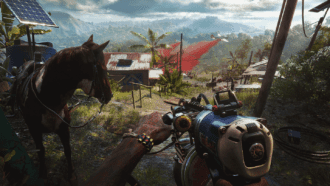 Far Cry 6 also changes its crafting approach, with several core supplies that you can collect across the map (metal, plastics, medical and so on) then being used to build new gear or modify your weaponry to utilize different types of ammunition. Enemies have different weaknesses, so finding and preparing the right gear (each with a different positive ability or buff) adds some extra depth and contemplation, rather than just “levelling up” your favourite piece of equipment over and over.

There are also several main hub areas, which have you navigating them in the third person, which is totally weird to see for the first time in the franchise’s history. These safe spaces are a place to return to throughout the story for missions, but also have other facilities that can be built, such as a kitchen where you can cook meat that you’ve hunted to create temporary power boosts, or specific vendors to access different gear. It feels nice to have a bunch of different home bases, safe from wildlife and soldiers.

“If you’re going to murder your way through an island, Yara is a beautiful place to do it.”

New weapon additions add another fun layer into how you wreak havoc on the island, namely the Supremo which is a backpack which can be modified to include powerful ultimate moves, like the Exterminator which has you shooting several homing rockets out into the sky or Medico which heals others and lets you keep a self-revive handy for when you get overwhelmed.

You can also ride horses, with several trails throughout the map that allow the new mode of traversal a bit more freedom than the motor vehicles provided. Additionally, Amigos act as your animal mates that you can call upon to assist you in combat. Chorizo, the adorable sausage dog with wheels, is useful for distracting enemies stealthily while being super cute, and a loyal crocodile named Guapo that is… well, far more aggressive, naturally. There are other Amigos that fight alongside you, and these replace the “soldiers-on-call” from the previous games. That said, you can take part in the entirety of Far Cry 6 with a friend in online, 2 player co-op, so you don’t have to be a lone wolf if you don’t want to.

Yara also looks stunning, a truly gorgeous place to spend dozens of hours combing through every one of its regions. It features lush green jungles, larger cities filled with small details everywhere inside and out, shimmering tropical oceans and abandoned homes that look truly lived in. Character models also look excellent, with the full motion capture on display, and extra visual flourishes – like a weapon that literally shoots fireworks – make for a visual feast at every turn. If you’re going to murder your way through an island, Yara is a beautiful place to do it.

Above all, this is distinctly still very much a Far Cry game, so if the rhythm of this murderous sandbox isn’t your style, this won’t change your opinion. I wouldn’t necessarily call it “innovative”, especially as a long-time player of Ubisoft’s many open-world romps. For fans though, Far Cry 6 does a lot right, and manages to find a healthy balance between serious stuff, like rescuing a truckload of refugees from their executioners or prison cells, and goofy fun stuff like a Street Fighter-esque cockfight minigame or chasing a crazed mongoose to collect a key that it’s run off with. Put simply, there’s a lot of entertaining stuff within Yara that makes it easy to lose countless hours within.

Sticking to a well-practiced formula but making smart, thoughtful enhancements, Far Cry 6 is a satisfying adventure through a beautiful setting in the tropical island of Yara. Some of its darker themes are glossed over a bit too quickly, but the story and the incredibly likeable characters you’ll meet along the way make for a memorable romp, with a once again compelling villain and, for the first time, a hero to truly root for. With a gigantic open world filled with delightful distractions, Far Cry 6 is the strongest entry in the series and is a great example of evolving a popular franchise into something special.